Who Gave Less of a Shit About Earth Day: the Mission or the Marina? 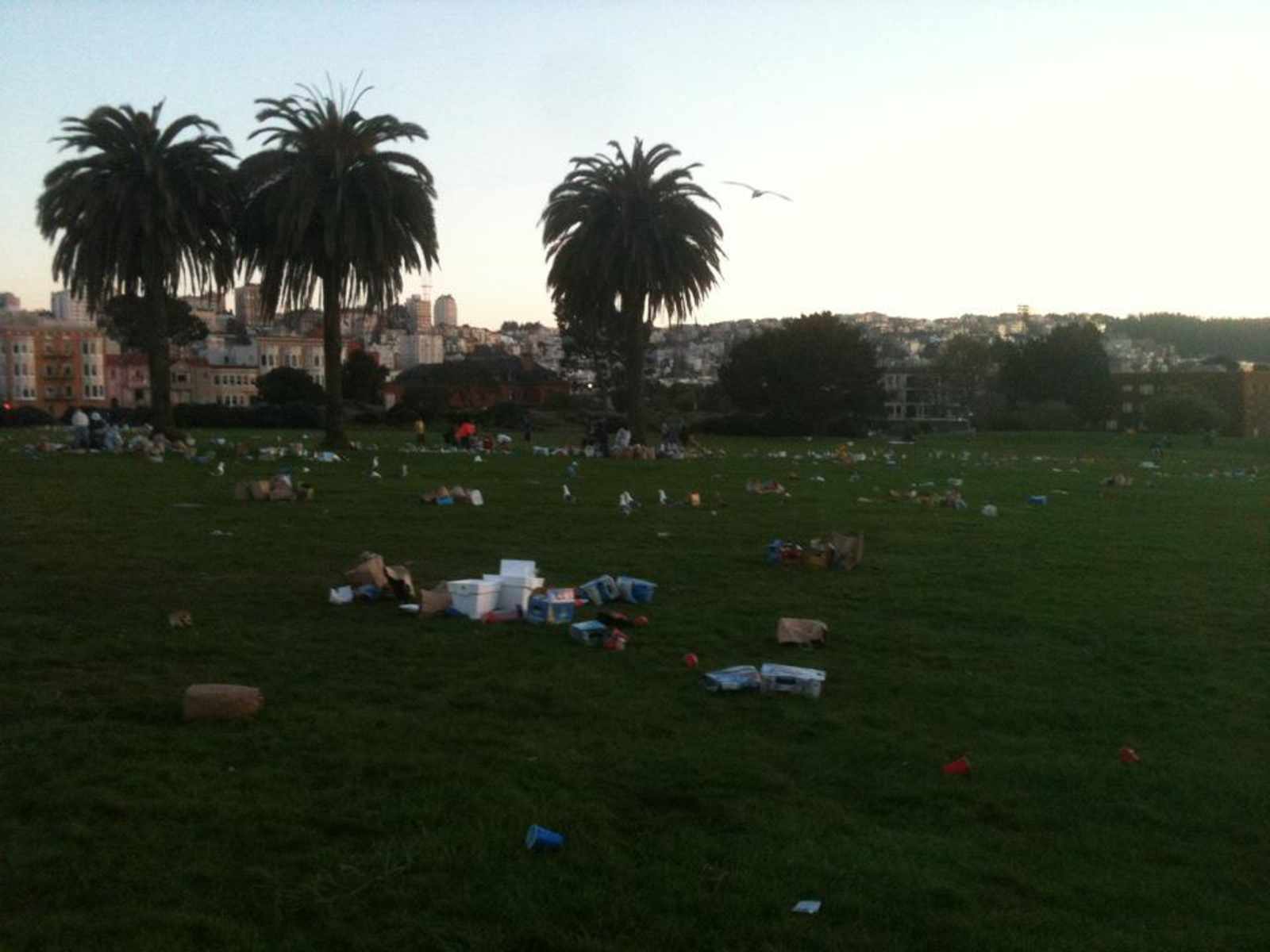 Alex sent us the above photo Saturday night in an email titled “Marina Scum on Marina Green” and described the gnarly scene:

Went biking today across the Golden Gate Bridge. Saw loads of people enjoying the great weather and drinking on Marina Green. Came back, and this is what Marina scum does to our city!

Tourists were disgusted. I told them it's just one neighborhood. Don't judge.. to harsh.

So a bunch of trash was lying around the Marina Green and when the sun went down, left behind piles of actual garbage? Horrible, for sure.  But as someone who loves ripping on the Marina at every opportunity, what I'm about to type pains me terribly to write: it's not just one neighborhood.  Well, not completely, at least. 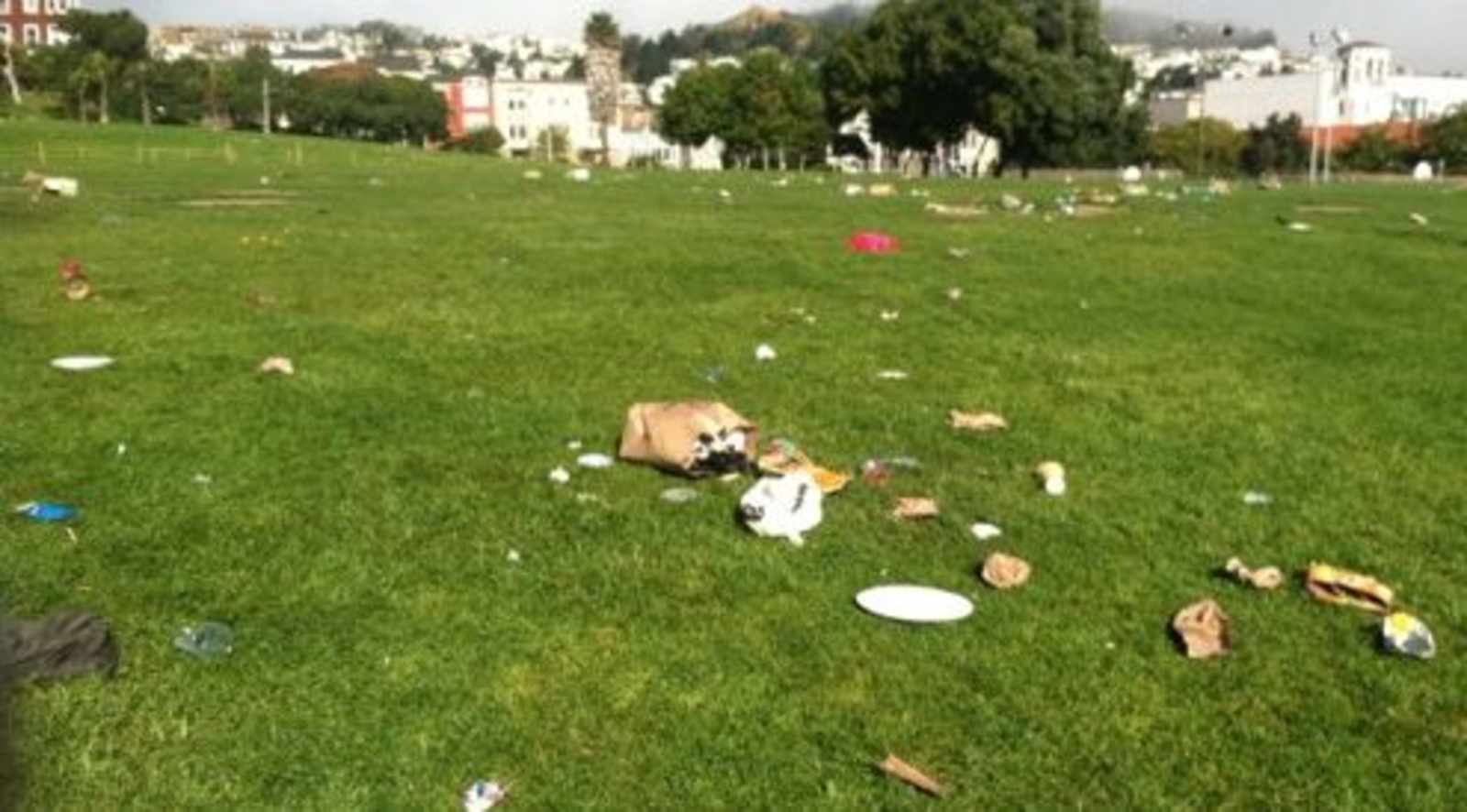 According to mavens over at Mission Local, this was the scene at Dolores Park Sunday morning “after Recreation and Park Department staff had consolidated much of the trash into piles” (and our hero can collectors did their thing).  Naturally, the old farts that are slowly dying around the park are using this 'wasteland' as evidence that it's time for Ed Lee and his goons to send the police marching in Dolores to whip the young punks that cherish those 13.7 acres into shape.

But, really, is Dolores Park's trash situation that bad?  It's gross, yes; but just look at what those savages to our north have to deal with.  And considering there were umpteen thousands of people getting casual in Dolores all weekend long, this seems like a “best case scenario” to me.

So, can we all just agree to maybe try a little harder to do the right thing and start blaming the Marina kids for our trash woes?  I hear they're kinda messy…

UPDATE: Andrew Dalton has a nice rant about this over at SFist.

The Mission is quickly becoming the Marina so whats your beef? Order a Marina Girl Salad, grab a baby stroller and watch the good times roll.

to be honest, i have seen more ppl care about what they leave behind in dolores park than in the marina. the air about it there, ( in the marina) is that” some one is paid to clean it up, why me?” but i hope this feelin does not catch on in DP

It’s alright, just leave that there. The maid will clean it up in the morning.

How about more trash cans spread around the park? Call me idealistic, but I really do believe that most people would rather put their trash in a can than leave it lying around. However, most people are ALSO really, really fucking lazy. So the key is to put enough trashcans around so that people don’t have to take their trash very FAR to throw it away.

Carry it in, carry it out.

Shit,what about hippie hill on 4/20?……in a side note, James CBCW was arrested and cited for selling PBR…..

I really hope a quake levels your asses soon. Y’all don’t deserve such a beautiful city.

You know who clean up the dozens of burrito nubs left in the park every weekend for free? The heroic Dogs of Dolores, that’s who. What did you clean up, dog haters?

I believe that “Marina Green” photo is – in fact – Fort Mason. Either way, that’s pretty nauseating.