Tutorial: Get Thrown Out of the Mission's Scummiest Dive Bar 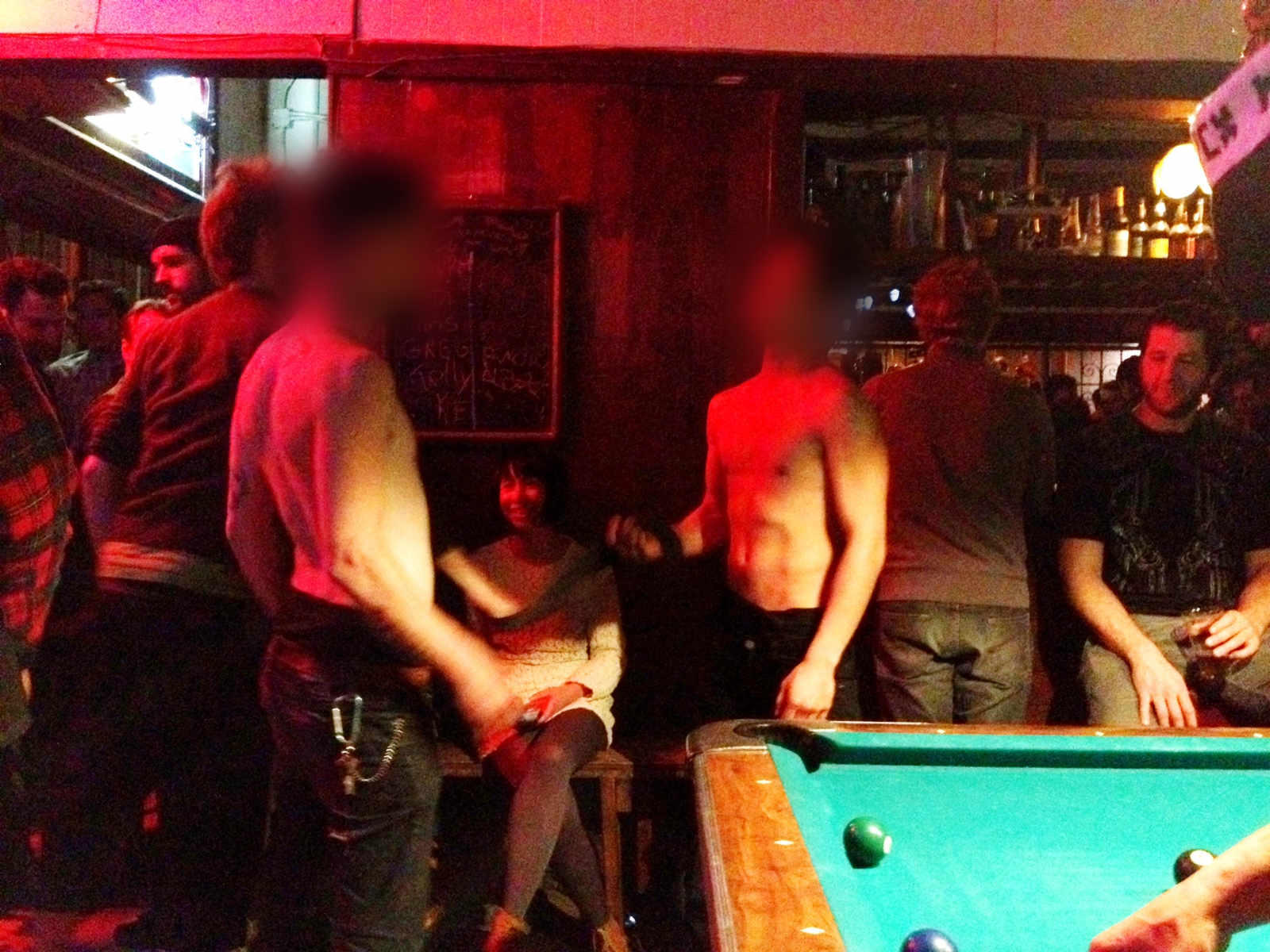 From what I'm told, getting thrown out of The Uptown into the dark underworld of drug abuse and prostitution (aka Capp St) is a rite of passage for any 'Mission Hipster.'  Once a guiding light in a sea of chaos, The Uptown has transformed itself into the intersection between a clogged Dolores Park toilet and a chichi Tijuanna donkey show.  That is to say, I love the place.  But getting ejected from a bar with that has urine-scented couches for seating is hard work.

Take one Friday evening some weekends ago. By the time I walked in the door at 11pm, I was told there had already been four fist fights, a pool cue snapped in half in an effort to procure a weapon, and someone had their cane confiscated by the bartender for repeatedly beating people with it.  Yet, no one was asked to get the fuck out.

Let that soak in for a minute.  Some cripple was stripped of his right to mobility for relentlessly bashing people with his gimp stick, but the bartender was good with everyone staying put.

Clearly, getting tossed was going to be no easy task.

After procuring my eviction elixir of choice (tequila, with a Tecate back, naturally), I sat my peace, love, and cruelty-free vegetarian ass down in a puddle of piss-warm beer (let's be honest, it was probably piss) on the bench next to my friends.

“I dunno what you're talking about,” I tell my thoroughly entertained friends. “Everything seems pretty chill.”

“Just wait, this game of pool is about to end.  Some motherfucker is definitely getting punched.”

And right they were.  Within minutes, two guys had leapt to their feet, ripping their shirts from their bodies sending buttons flying everywhere.  But the scene had become so commonplace that the bored bystanders couldn't even be bothered to watch as shit unfolded.  It wasn't until the two actually started sparring that someone jumped in to break them up.

At this point, the bartender silently popped her head into the room, glared, and went back to slangin' drinks.  The gladiators dressed themselves with their tattered rags and retreated to social comfort of their respective crews.

That was the story of the night.  People started shit, the bartender-cum-substitute teacher pussyfooted around the situation, and so on and so on.  No one was getting asked to leave.  No sir—no way.  Fights?  Pssh, people get shot, like, for real outside.  Who gives a fuck about some swinging fists?

But then some crazy psycho girlfriendpersonsomething came into the picture and bros'll-be-bros turned to bona fide shitshow.

Whoever said whatever to her is unbeknownst to me, but the blonde-haired twig-like CCA-wannabe lost her shit.  Grabbing everyone's drink in the vicinity, at least a dozen in total, she started throwing them at her boyfriend's feet, shattering every single glass on the ground in a spectacular display of inaccuracy and athletic ineptitude.

As the lovers barked at each other, the courageous bartender came over, janitorial gear in tow, and politely requested the pair “calm down” as she swept up the mess.  But such a request was denied—denied!—by the Bonnie and Clyde of shitbaggery.  The dude, ever so offended, pulled his pants down to show what he thought of the fucking place while the bartender escaped back to the bar: 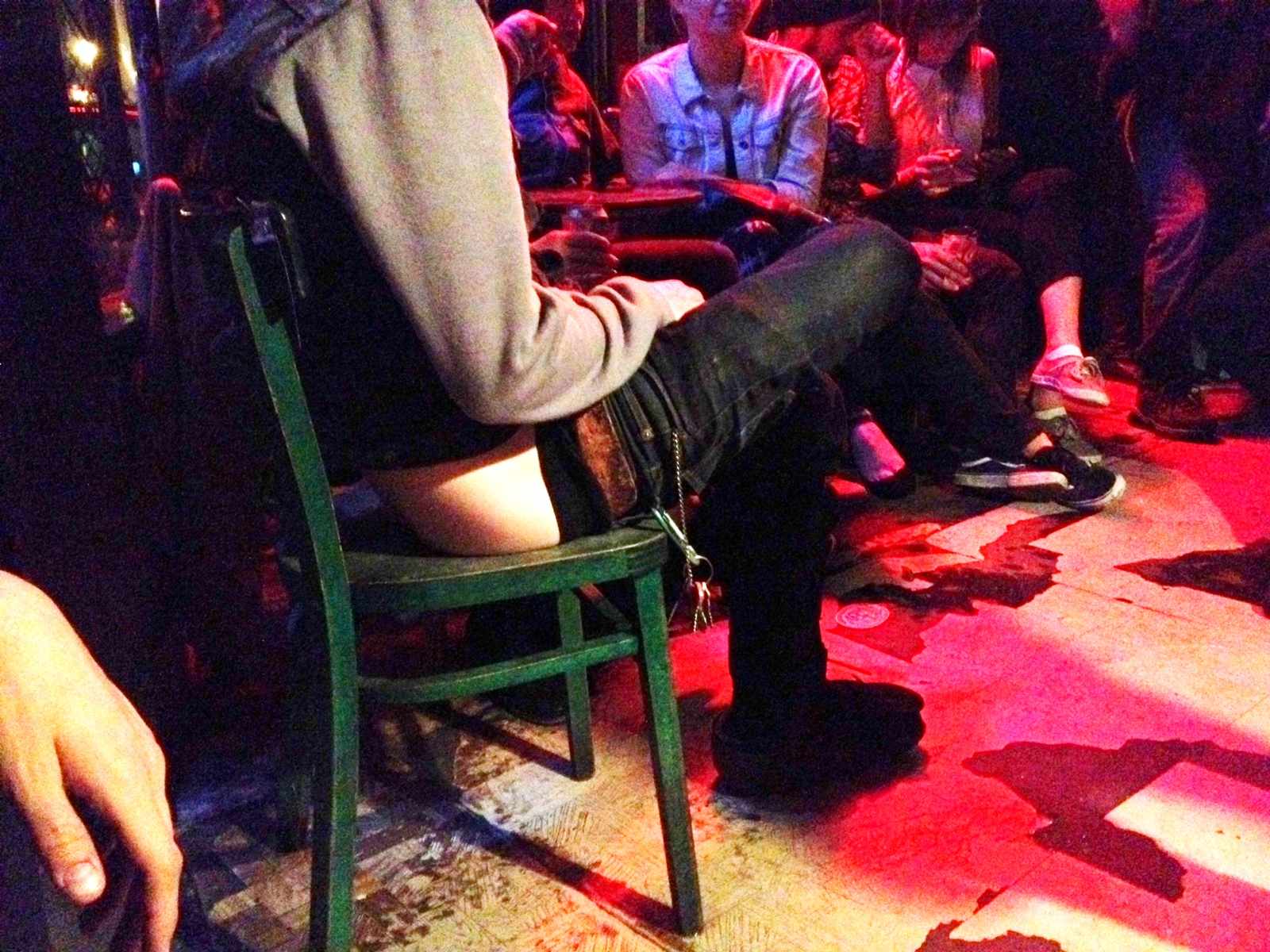 One samaritan, rightfully concerned by the shards of glass everywhere, approached a nearby dog owner to warn her about the paw-mangling hazard and suggest she carry her pup out.  The conversation carried on friendlily enough when outta no where the human puppy lighthouse was shoved. Then punched.  Then pushed up against the wall.

“MIND YOUR OWN FUCKING BUSINESS WHO DO YOU THINK YOU ARE?”

The girlfriend was back and mad as hell: how dare someone point out the aftermath her glass-shattering aggression?

My idiot friends and I traded looks that silently communicated, “Maybe this shit is starting to get out of line?,” and “I'm pretty sure Bender's doesn't have a cover tonight.”  With that, we started chugging back our beers to make an exit.

Then, another roar at the pool table.  The couple, once again bored with battering strangers, were trading smacks.  Shit was getting tired—these guys needed to fuck it out and get over it.  So, like the adults we are, we spontaneously started chanting “FUCK! FUCK!” at the quarreling sweethearts.  The back of the bar agreed, anxiously hoping anger would make way for an unplanned amateur Kink.com iPhone shoot, and quickly jumped in on the chant.

Right then and there, the bartender leapt over the bar, right index finger snarling in my direction, “You! Get the fuck out!”

But who am I to argue with the authority of a bartender?  So I threw up my hands in the most exaggeratedly perplexed way possible and headed towards the door.

As I made my way out of the bar and looked back at the psychotic CCA lover trying to choke the life out of her shitbag messenger boyfriend on the pool table, I realized I finally made it—I finally had been kicked out of The Uptown.  By doing almost nothing at all, I accidentially cracked the code for what it takes to get tossed.  I didn't need to punch anyone or destroy bar property or touch my bum to the furniture; all it took was whipping a thirsty mob into a demanding chant for a public display of hate sex.

The seemingly impossible task of getting booted out of the shittest Mission dive happened.  A true life achievement unlocked on an otherwise hollow Friday night.

After all, it's not every day you get thrown out of the bar you named your blog after…

How very zen of you. Also, if you think about it, it’s just like American TV; some violence is ok, but nudity / sex is a big no-no.

Now THIS is the kind of shit I read local blogs for. Well done.

What would David Campos do? WWDCD?

Damn. Fantastic story. This makes me want to get drunk and go be the random variable in one of those skirmishes.

Scummy in a bad way

epic tale, see if you can get tossed from Clooney’s for being too drunk next, I don’t think it is possible….

I watch two people get tossed from Clooney’s during the NFL playoffs this year, but they were hella old and I’m pretty certain they did heroin in the bathroom.

I got thrown out for suplexing a dude on the pool table who jumped me cause he lost to my gf…this was about 2 weeks after 9/11. Been going there for years..no problem….the bar takes this douche bag’s side. Needless to say, I never went back. Funny story, the owner of the Uptown…a real upstanding gent who’d just hit on your gf as soon as look at ya…turned up at my house for a Halloween party I threw…He only got turned away at the door. I can get petty like that.

I liked it better when you could score heroin there.

I have no idea how this kind of stuff happens without someone getting fed up with drunken stupidity and lack of respect and just booting the two fucks out vigilante-style. If I was standing around witnessing this, I know I would get angry enough to try and do something (yeah, yeah, “I say this now”, “internet tough guy”…etc.) But seriously - what you have described is blatantly fucked (threshold moment: after the bitch got in the dog-owner’s face), and if everyone is watching this unfold, it should be socially acceptable to just look at one another, close in, grab these two fucks and literally toss their asses out on the street. Stories like this make me wish there was way more casual hipster-on-hipster violence.

Yep. That was exactly my sentiment. I would have a hard time not rallying the bar up to fuck with these children.

Another made up part of the story!! : the “bitch” was the DOG OWNER!!

“After all, it’s not every day you get thrown out of the bar you named your blog after…” ever think there might be more to the story?

This part of your story is hard to believe…Right then and there, the bartender leapt over the bar, right index finger snarling in my direction, “You! Get the fuck out!”

If any of you bangs & beards idiots start this crap @ Bender’s I will personally downvote you IN THE FACE.

While I’ve always considered Uptown a ‘cool’ bar rather than a ‘dive’, I think dive bars tend to roll with the usual scuffles, moderate violence and drunkeness much more than the doucheyness of starting a group ‘fuck’ chant.

And this retardation is different from the Marina how?

No one receives a high-heel induced concussion?

Does this place serve Jagger bombs?

Think about all the money the Uptown (and you) could have made if the kink.com style hate sex video actually happened on their pool table. Clearly the bartender has no business sense whatsoever.