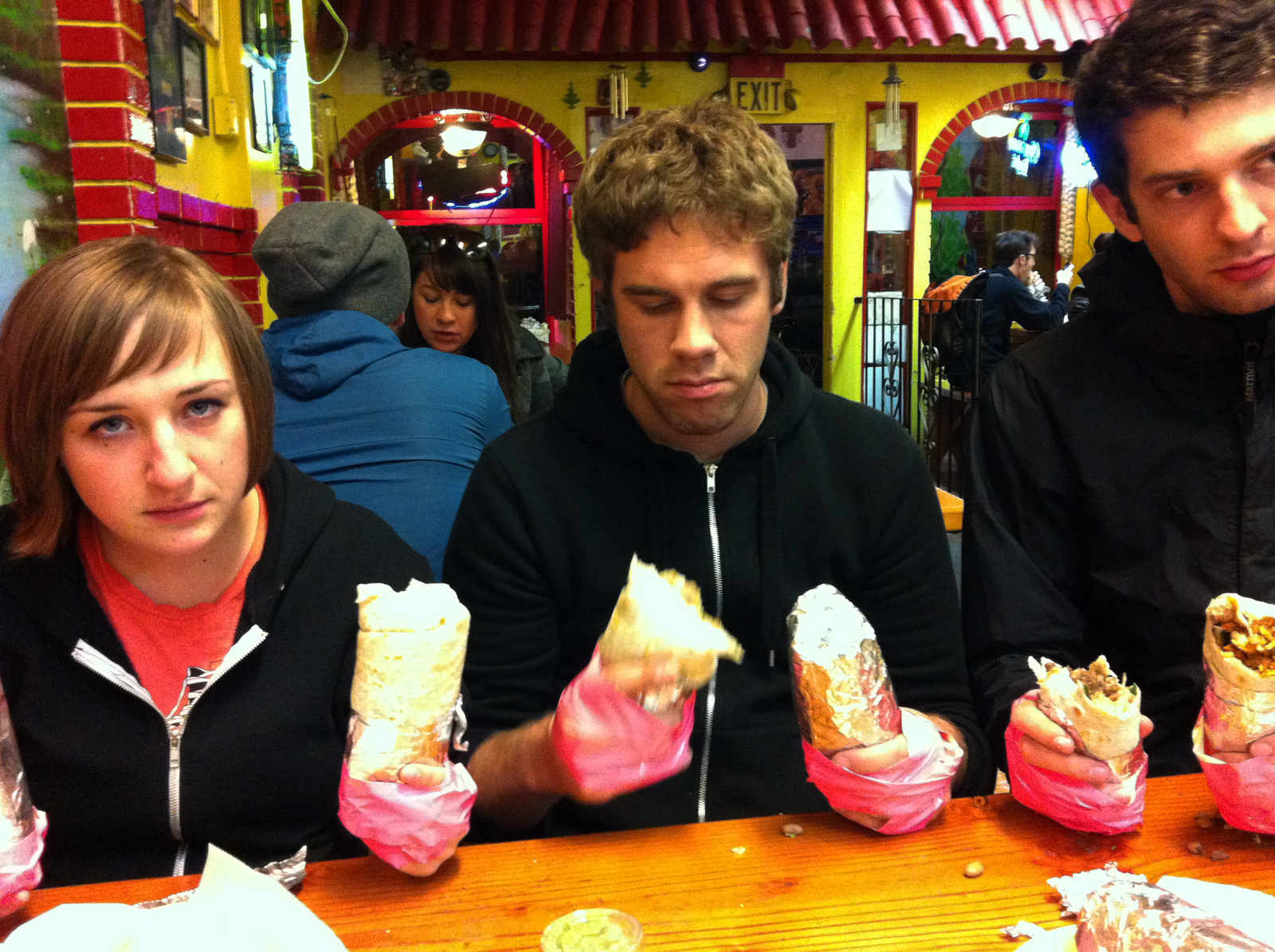 I'd like to tell you there was a reason for this.  I'd like to be able to come out and say “I quit drinking for Lent, but didn't quit drinking games,” or “Mission District seniors were hazing all the the freshmen by forcing them to strap burritos to their hands and eat like fucking animals.”  Any reason—any reason at all—to justify why I taped two of Taqueria Cancun's finest super veggie burritos to my goddamn hands.

But there is none.  All I can say is that there is a point in every San Franciscan's life when your friend says, “I'm so hungry, I could eat two burritos,” and you emerge from the junk drawer with a roll of duct tape in hand demanding that he “prove it.”

That's right, we entered into the sick realm of gastronomical gaming—a mad world perverted by the likes of milk chugging and sausage eating—in the boldest way possible: Edward Burritohands. 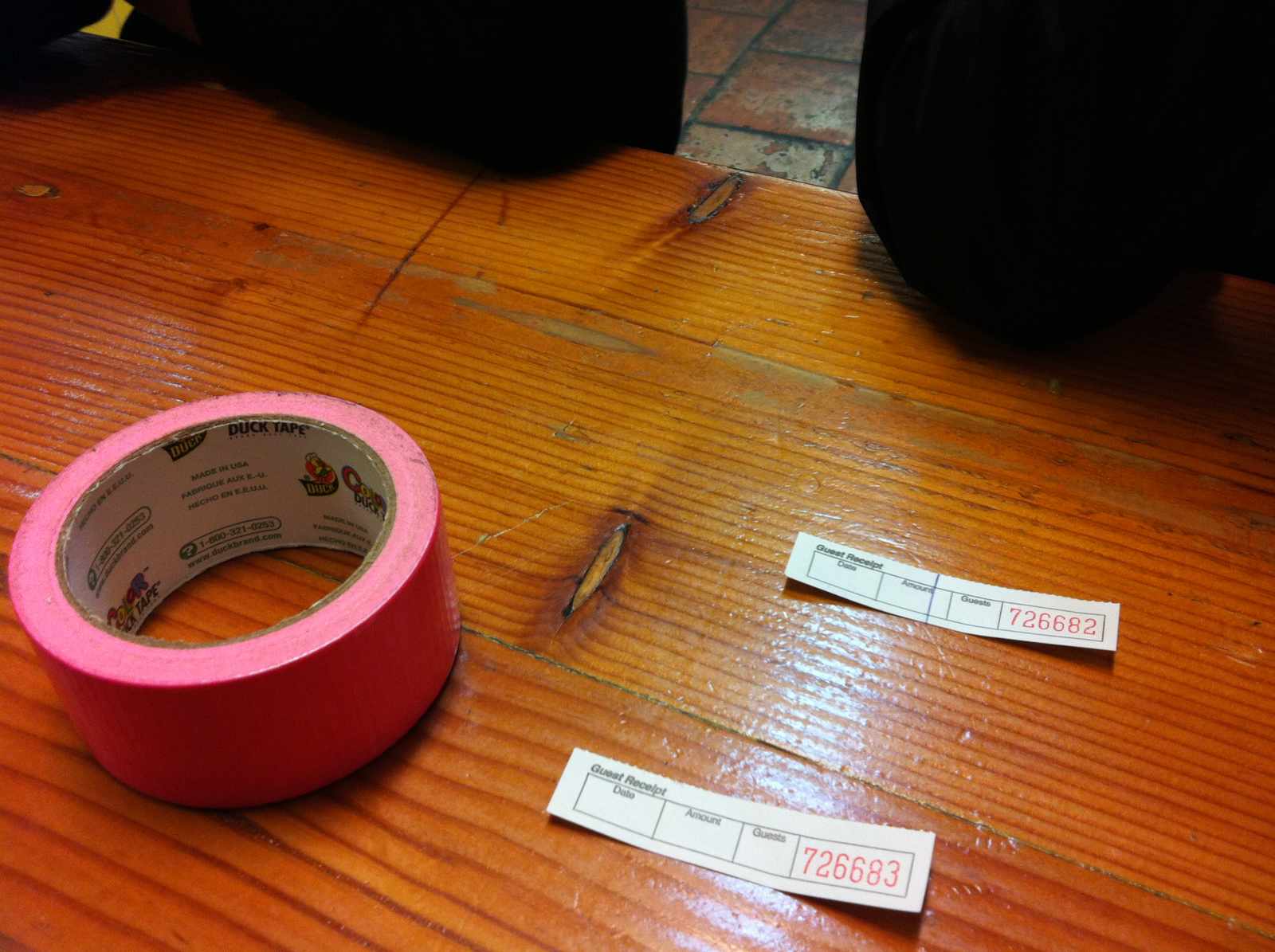 Edward Burritohands begins like any other expedition to the taqueria: with a couple of receipts and an appetite roaring with anticipation.  But this outing also comes with a giant roll of pink fucking duct tape.  And farts.  So many farts.

However, even getting to your table is a test of strength and willpower the rank and file will never dare attempt.  The minutes of agony standing in line, clutching your stomach out of hunger and preemptive embarrassment, are enough to send most running out the door in a state of frenzy.  But you'll stand there, awkwardly kicking your feet against the ground, looking at your friends asking, “Are we doing this?  Are we really about to eat 2,000 calories taped to our hands?”

Yes.  The answer is always yes. 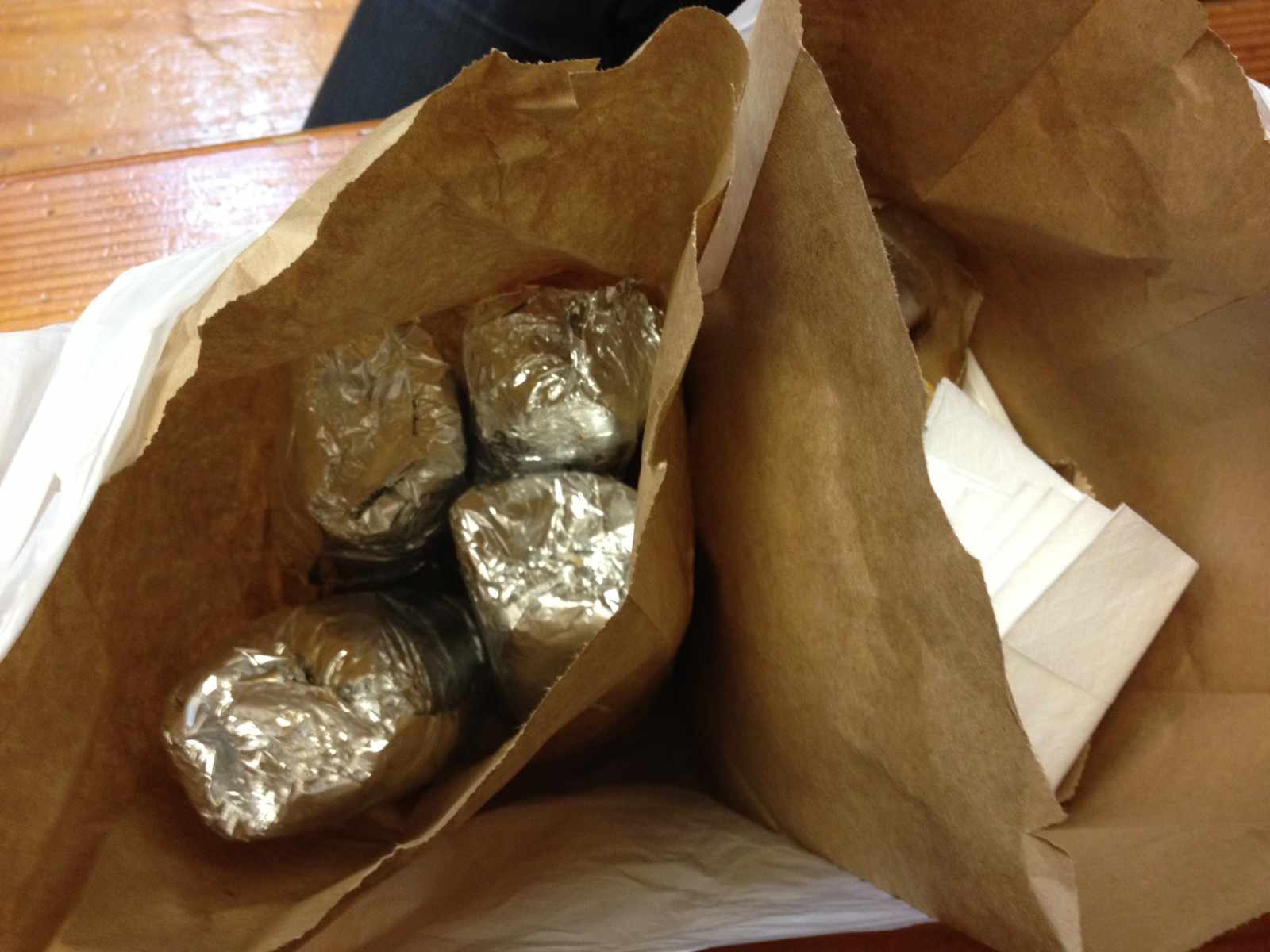 By the time fate was delivered to our particular table, we began to realize we had no idea what the fuck we were doing. “Doesn't Edward Fortyhands have some rule about vomiting?”  “Wait, are we going to vomit?” “HOW CAN WE DRINK BEER WHILE DOING THIS?” And, perhaps most importantly, “is it even going to be possible for us to food blog this?”

So before singing the national anthem and diving into some hand-to-burrito combat, we came up with a few important rules:

And away we were. 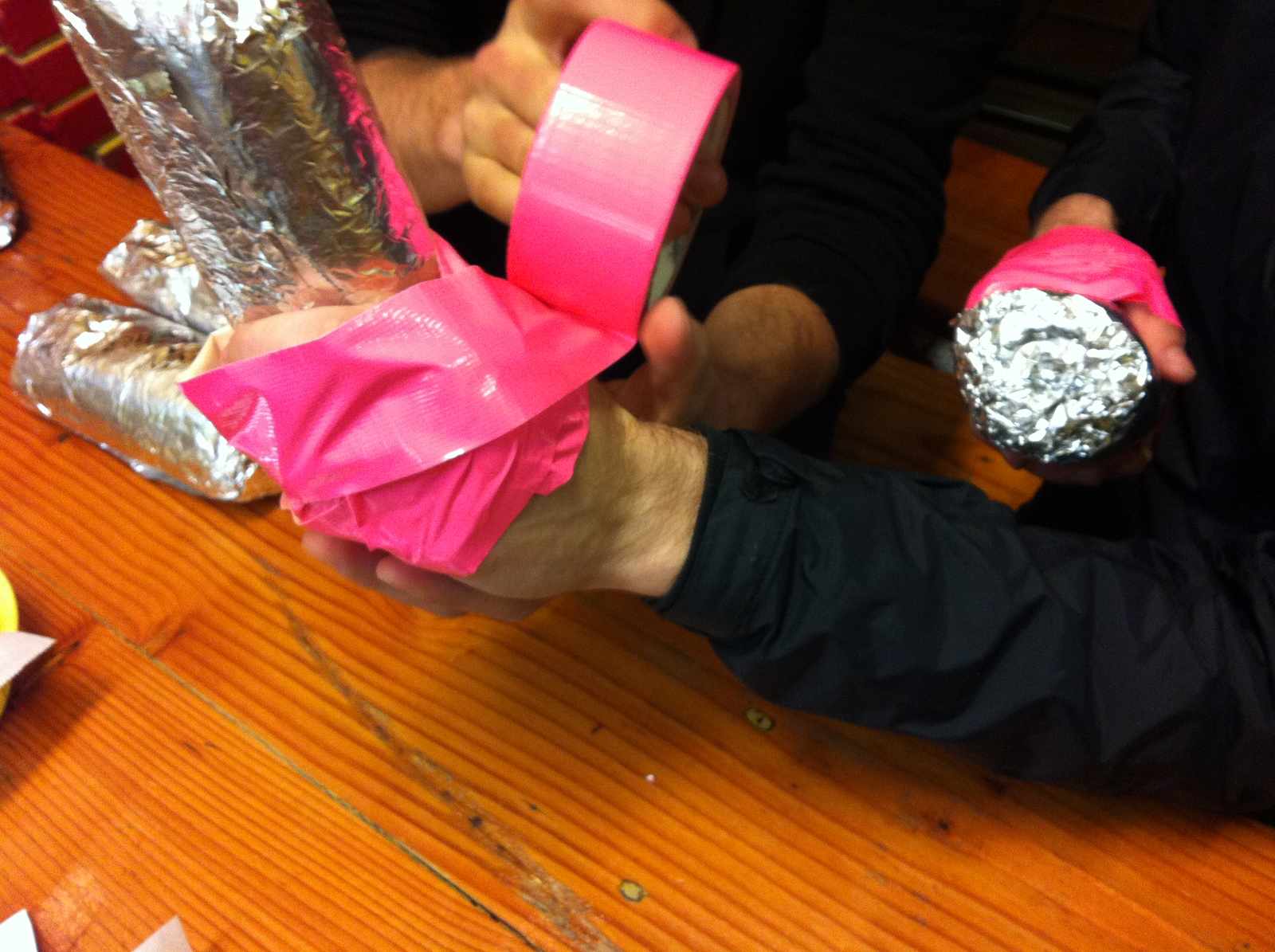 Once the first burrito is taped up, there's no turning back.  It's the fast food equivalent of hurling yourself out of an airplane: with all control lost, you're forced to disassociate yourself from the grim reality that you're about to publicly make an ass out of yourself and will, in all likelihood, not live to see the premiere of Battleship.

But the second burrito?  That's when shit gets heavy. 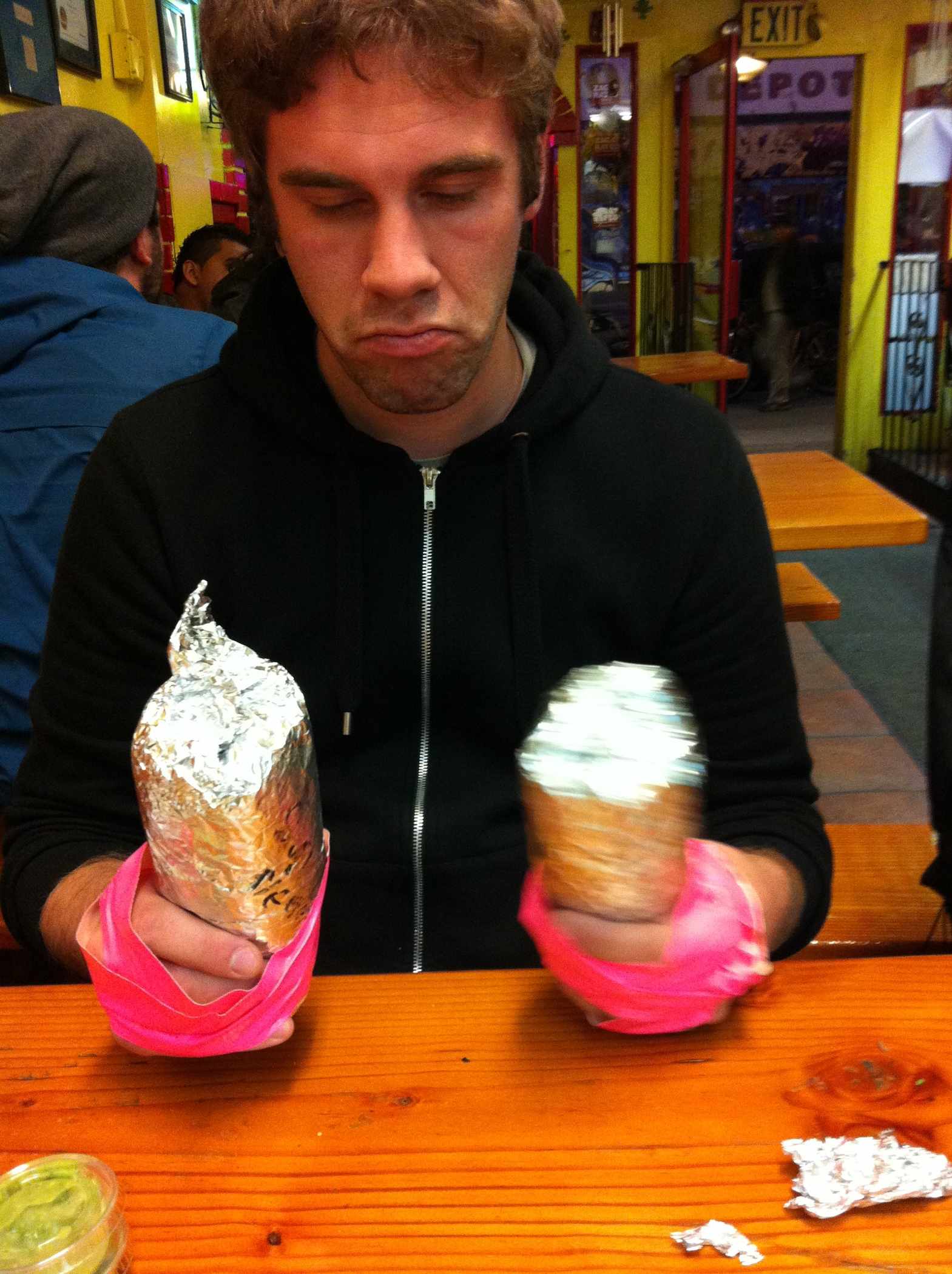 My Responsibility.  My burden.  My bummer.

Allow me to paint you a picture.  You've just stumbled onto the set of the Food Network's adaptation of Saw, but instead of hanging out with the babes over at the catering table, you're in Jigsaw's bathroom.  You're in Jigsaw's bathroom with burritos taped to your hands.  And guess what?  Anthony Bourdain is holding your family captive and is going to murder them unless you eat through your newfound pound-and-a-half carne asada appendages and escape.  Tic-toc, motherfucker; it's almost six o'clock.

That's how having two steamy burritos taped to your hands feels.  A game with no winners.  Should you best the challenge, you're looking at being bedridden for days and a lifetime of grisly flashbacks every time you step foot in a taqueria.  Lose, and forever be that asshole who strapped two giant cylinders of empty calories to his hands and couldn't even finish the damn things.

But at some point, you need to stop dwelling on how asinine of a game Edward Burritohands actually is and chow the fuck down.

And chow the fuck down you most certainly will.  The first burrito goes down amicably, like every other burrito you just couldn't put down.  The people sitting at the tables next to you aren't staring anymore; the mariachi has stopped laughing in your general direction.  You've made peace with the chaos of an impromptu eating contest.

Eventually you reach the knuckles and feign an attempt at eating the remaining rice and beans pooled in your hands.  Yet, that second hand is growing heavy.  Real heavy.  So you disregard the nubs of round one, open your exhausted mouth, and beginning tearing away the foil from your second burrito. 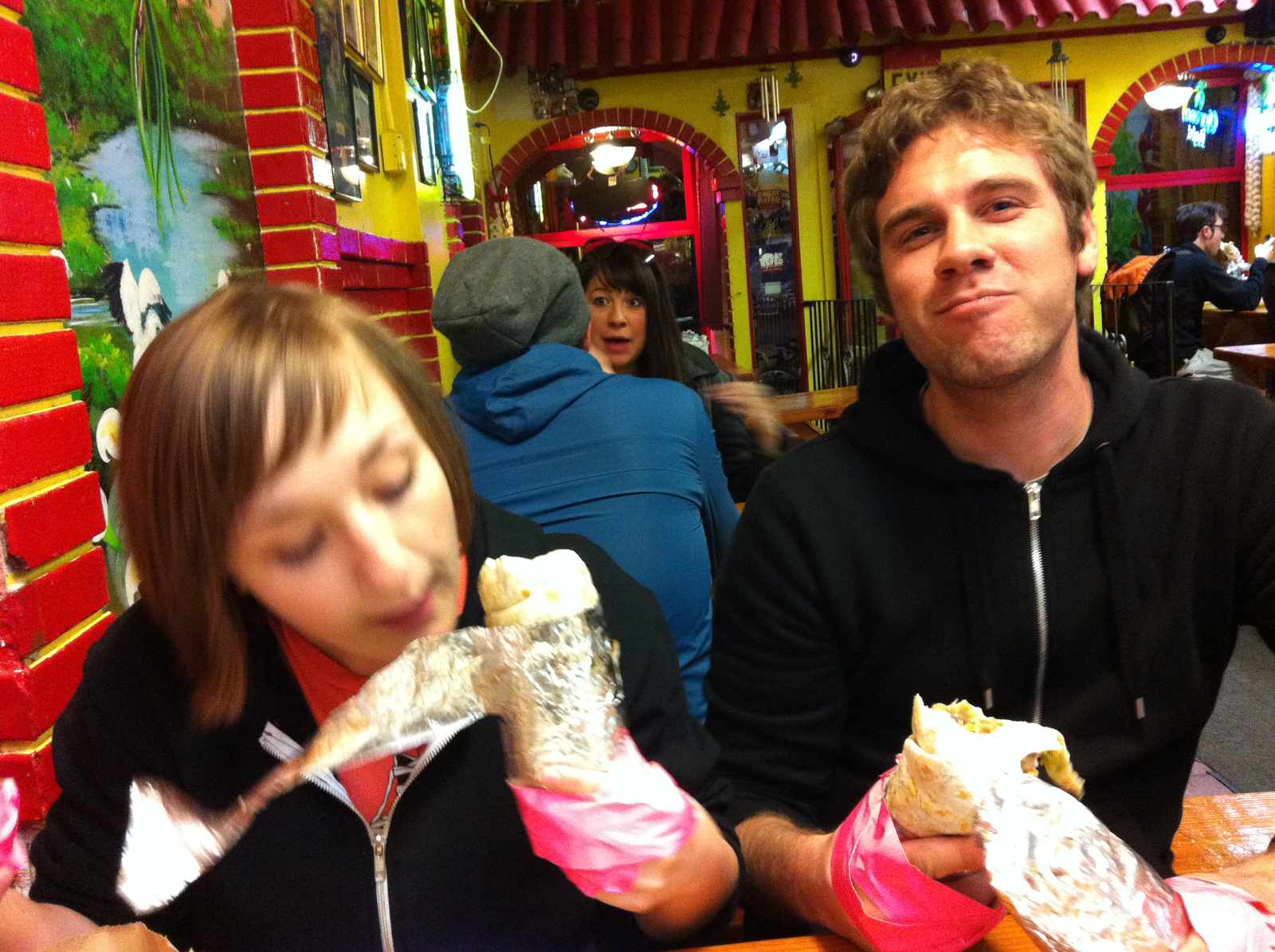 Unwrapping your second burrito is quite easily the highlight of the game, if only because you get to do something with your mouth other than eat or howl out in misery.  But really, this is the ultimate stage for showmanship.  Undress your burrito with confidence and you'll be sure to deal a psychological blow to your opponents.  And the eyes of the cooks who prepared your inevitable downfall?  They're fixed upon you, because for the last 15 minutes, they too have been wondering how the hell a bunch of softhands without opposable thumbs could possibly shuck a burrito.

It's about this point in the competition when everyone loses their goddamn minds.  Going an entire burrito without taking a drink, scratching your ass, or checking in on Foursquare is no easy feat, never mind going two burritos.  It's because of this uncontrollable urge to return to the normalcy of routine and ass scratching, someone in your party will inevitable try to answer a phone call or tweet with their tongue.  You must let them, because watching someone clean hunks of meat off their iPhone with their fucking face is an experience you'll only have the opportunity to see once.  Unless you make a habit out of doing lots of acid.  But that's another story. 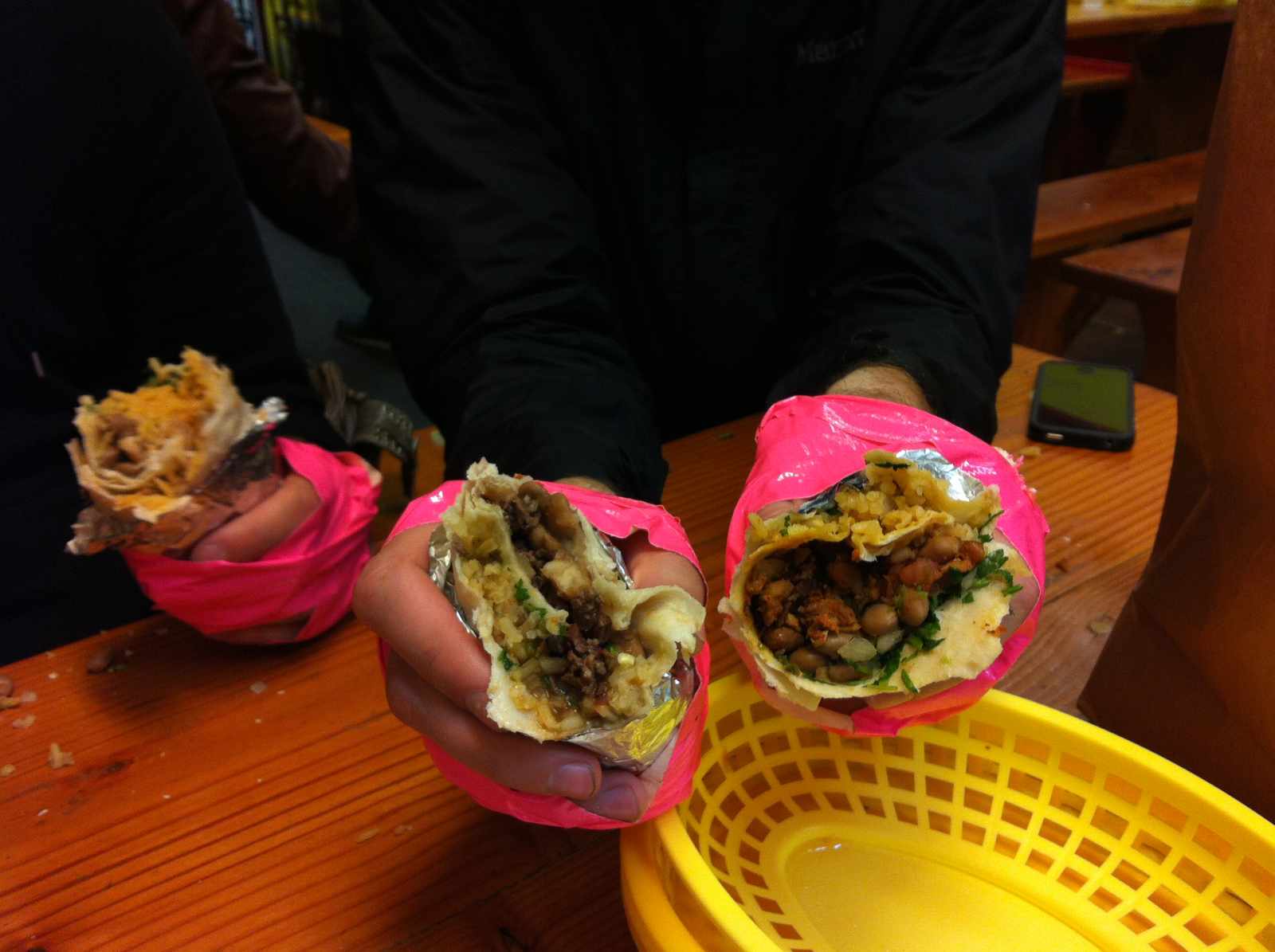 The remainder of the competition is sadly anticlimactic.  When we were left with two burrito stubs, we were forced to cope with the fact we never figured how to end the goddamn game.  We tried to squeeze the remaining bites out of our hands like some sort of diarrhetic GU Energy shot, but that left us with a river of sour cream flowing down our arms and a table covered in pinto beans.  So faced with bursting stomachs and the harsh likelihood we were going to miss the first minutes of the Mad Men season premiere, two competitors said “fuck it” and began the arduous and painful process of peeling the duct tape from their limbs.

But I couldn't accept that.  I couldn't accept forever knowing I tried Edward Burritohands but never made it to the finish line.  So as my fellow competitors tossed their foul remains in the garbage, I pressed forward, walking down a dark Mission Street, determined to finish what I started. 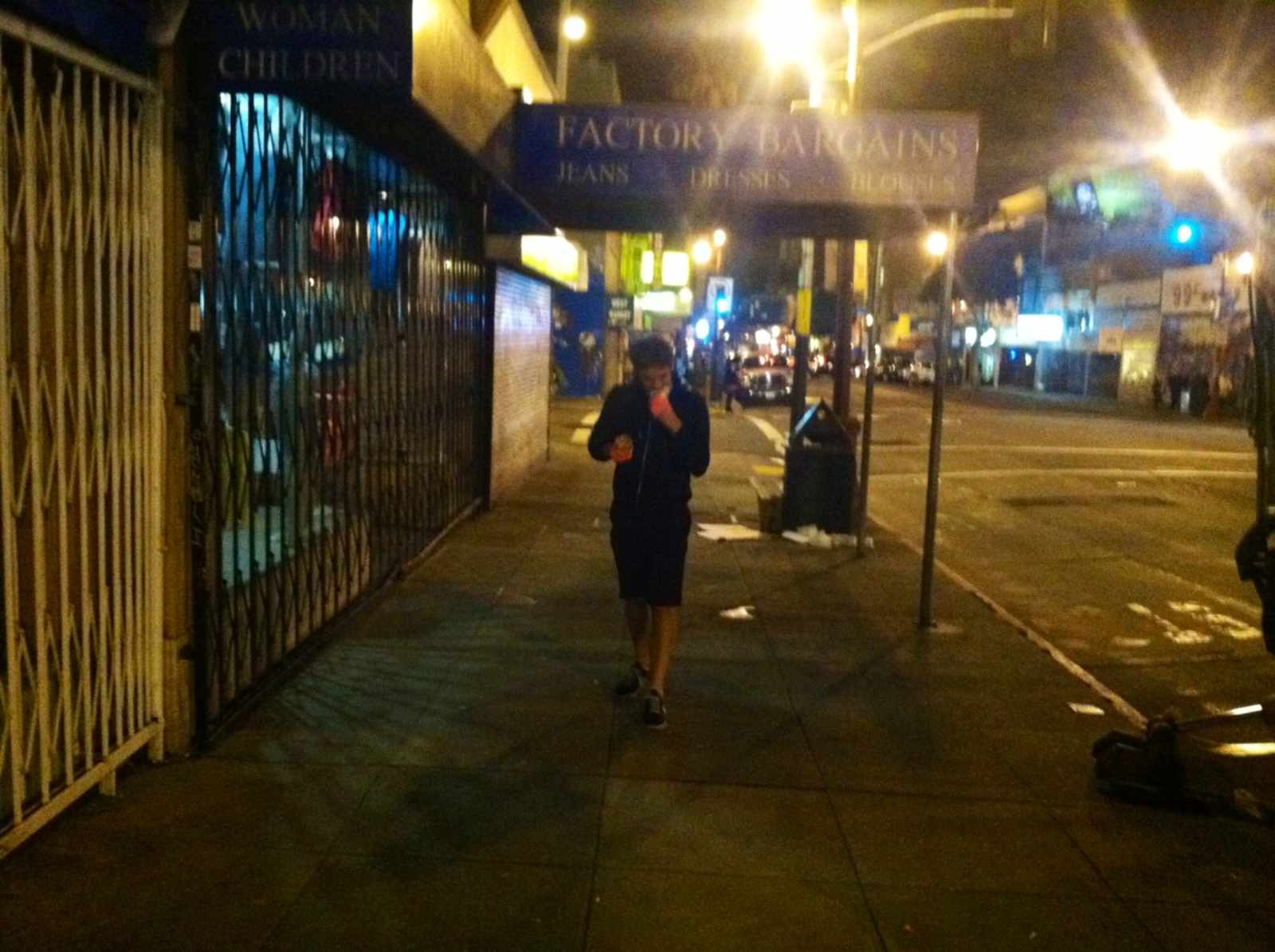 Please note: I cannot recommend you do this.  Despite my general disdain for most of humanity, I cannot, in good conscience, encourage anyone to embark on this half-witted adventure into the depths of American gluttony.  But should you feel so compelled, I must beg of you to do this in the privacy of your own home, because if throngs of fellow gringo misanthropes begin flocking to Mission taquerias to compete, I fear I'll be left for dead in the dumpster behind Farolito.

[Many thanks to Alan for taking photos/pouring pico de gallo on our burritos for us, and Sam and Sierra for chowing down with me.]

Wow, this is an awesome Dumb Game!

What’s wrong with people? Is this what they do with their unemployment money?

try it with a burrito and a 40. best of both worlds.

Anything that involves MC Paul Barman and burritos is alright with me.

I’m not even mad, I’m impressed.

I read this twice. Then got hungry, both times. Sierra’s facial expressions are the best part.

Go back to Iowa

wait, who is the one in the black hoodie

How much booze was imbibed prior to arriving at this important executive decision?

Way too many pics for way too little amusement.
Writing’s trying too hard, too.
Attention-whores + lame premise = sadface@howlowSFhasSUNK.com

GTFO of my city.
so sick of lamers.

If you get lettuce instead of rice you can cheat and get through both since you won’t have all that rice occupying your innards.

There you go; using your mug. If you’re really good at riding your bike with no hands, you can even use this mug to drink your hipster coffee, er, Horchata, or, Cochata.