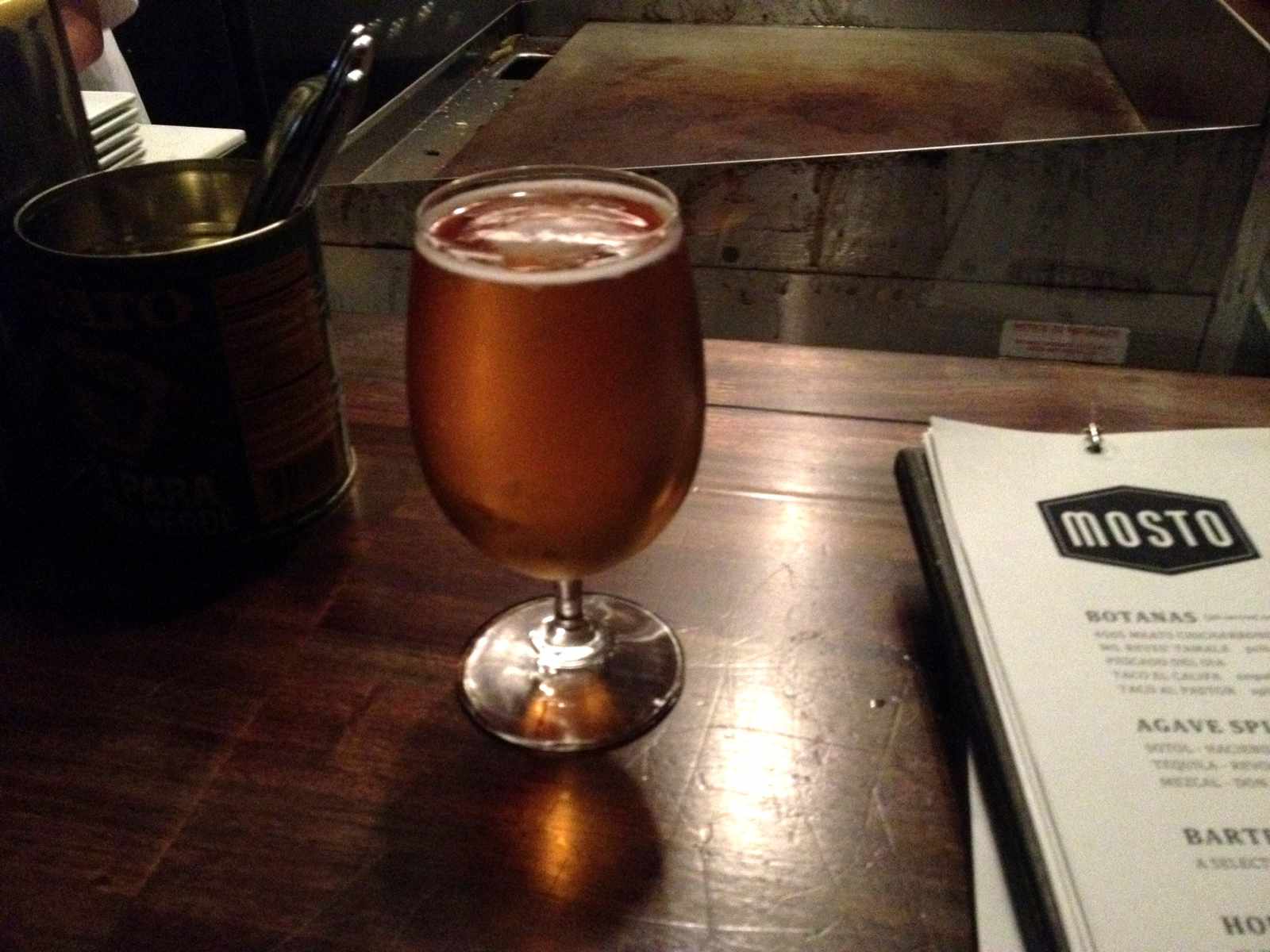 Against my better judgement, I went to Valencia's bougie taco and margarita upstart Tacolicious/Mosto the other night. Mistake!

My friends and I arrived at 7pm and were informed it would be about a 35 to 45 minute wait for a table, which seemed a little high for a slow weekday night.  But they have a bar/holding cell attached to the restaurant, so we figured we'd guzzle some drinks and stand out like a group of broke hipsters in a room full of beautiful people in sports coats.

The initial conversation at the bar went something like this:

“How much for a house margarita?”

”Uhhhhhhhhhhhhh do you have something for a guy who clearly can't afford a haircut?”

Then a Tecate in a wine glass was put in front of my face.  Took one sip.  It was skunked.

Now, I think I've only had Tecate from anything besides an aluminum can once, so I assumed that was how cheap beer in a wine glass was supposed to taste.  But it was awful.  I could feel the muscles in my face wrenching with every sip.  So after conferring on the taste of this atrocity in a glass with my Mission compatriots, I did the unthinkable: I sent the drink back to the bar.

The bartender was apologetic and poured a new Tecate in a pint glass, and the manager even came over to make make reparations in the form of a complimentary margarita.  The margarita sure was tasty, but the new Tecate was just as shitty as the first one.  But not being one for spit in my food, I foraged for a handful of limes at the bar and drank it anyway.

Now, after a couple more drinks, we realized it was already eight fucking thirty.  For those of you who aren't good at math, that means our 35 to 45 minute wait had been crawling along for 90 minutes.  As we were heading out the door to go to Cancun to drink fresh Budweiser and eat tacos like normal people, the hostess grabbed us and let us know our table was ready.

I won't bore you with the details of my admittedly tasty food, but let it suffice to say that I paid $13 for two tacos and complimentary chips and salsa.

Is it even possible for a Tecate (presumably from a can) to be “skunked”? Maybe something else was going on, like your mood curdled the beer?

I’ve had bad tecate, funfunfunfest last year had tons of them. I assume they hit up some warehouse that had had cases of 16’s sitting for the longest because that shit was rank. I haven’t wanted a tecate since

Marina/Mex comes to the Mission.

Last night I got a haircut at F.S.C. Barber, headed over to Tacolicious for some rad eats, then met some of my bros at Medjool for a nightcap. I have to admit I’m envious of you folks in the Mission- might have to move down from the Marina, your neighborhood is really hip!

“Is Valencia ‘fucking over’?”

Was there a question in that sentence somewhere?

It’s already time for the Tenderloin, but my stomach ain’t strong enuff to try it.

how does someone approaching his thirties bitch about spending 50 dollars on a meal? the 1% in the America make $380,000 dollars a year (pre-tax). no one is asking you to make that kind of money, but you should be making enough a year (e.g., 60K and up) where 50 bucks is no big deal.

I guess you never tried raising a family in San francisco on 60k a year or you wouldn’t be balking at someone thinking $50 is a lot for one person’s taco dinner.  What an asshat comment.

seriously though, “bad?” tecate? i was unaware they made “good” tecate. as far as mosto goes, i’ve eaten there twice and their food is very fresh and sometimes very good. the service is uneven. the drinks are as expensive as any other “fancy” restaurant in the neighborhood these days. i also don’t think the bros in charge of this place were thinking when they forgot to change the name of the marina girl salad, because despite the name it is really quite good. fuck, and the name of the restaurant, too. wouldn’t they have been better off just naming it something less lame and disassociate themselves with the marina all together? i predict these guys will be around for a couple years. who could predict what this street will look like in 2015…

In case it wasn’t clear, skunking is caused by exposure to light. If the Tecate was on tap then it would have to be in glass kegs and a brightly-lit cooler to get skunked.

More likely the problem was crudded-up tap lines or super-old beer because who knows what kind of civilizations develop in there between the two times a year some asshole actually wants to drink a Tecate on tap in a restaurant.

Y’all, first off, love your site, read it daily. About the shitty experience you had, my bad. I used to work at another brewery in SF and have had skunky beer before and it turned me off drinking for a bit (admittedly, not long, like hours). And while I love seeing the thread on here getting really colorful and well written on both sides, the fact remains that you feel like you got a raw deal and don’t want to return. Regardless of where we are from, what our name is, who we are trying to be, I never want someone to feel like that. Also, I am not the manager that approached you and tried to reconcile the problem with you but feel they acted in an honest manner and tried to help as best they could. I am, in fact, re-training our host staff in etiquette and beta testing a host app which will run on a monitor in Mosto to show our wait list as to be as transparent as possible with our guests. Thanks for the head’s up and let me know if you want to stop by again, I’d love to trade shots of warm, well mescal with you.

um, that looks like a stemmed beer glass, in your picture. are you suggsting that all beer be served in the same pint glass?

and did any of you ever take a second to think that they might be making fun of the marina by naming a salad “marina girl sald”?

You got a free margarita in place of your shitty beer and you’re still complaining. You just don’t want to like the place.