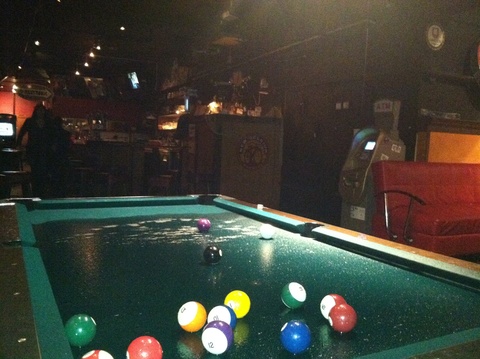 Gestalt's water-soaked pool table (GET IT? POOL TABLE) as seen late on Wednesday, November 30th, after a crazyperson pulled the fire alarm.

Known for its bike-friendly attitude and an extensive selection of German beer on tap, the Mission’s Gestalt Haus is a popular hub along 16th Street. The work of local artists decks the warm, red walls and a high-end sound system is often set at a low decibel, allowing conversations to unfold amid the clinking of liter mugs and the clacking of always-in-use pool cues.

Such was the scene as midnight hit on a recent Tuesday: Patrons lined the bar, sausages sizzled, and an iPhone manned the deejay booth. Then, *bam* The vibe went from chill to shrill, shattered by the piercing shriek of the fire alarm and soaked with streams of water from the sprinkler system. As soggy drunks scrambled outside and SFFD sirens drew near, owner Dan Hawkins got the heads-up call. It’s one to which he has become rather accustomed; in fact, the exact same thing occurred a week prior, triggered by a false alarm set off on the building’s second floor. (The latest kerfuffle was brought to Gestalt by a waste-bin fire in the boiler room.) “This is the tenth time this has happened,” he tells me. “It’s those fucking crackheads again.”

Hawkins is referring to city-supported inhabitants of the Sixteenth Street Hotel, which sits above Gestalt and does indeed house an array of mentally ill, alcohol-dependent and, yes, often crack-addicted tenants – courtesy of San Francisco’s Department of Human Services (DHS) and federal mandate. It is one of 50 single-room occupancy (SRO) hotels in the Mission District, which account for a significant portion of more than 3,500 “supportive housing” units throughout the city as part of the Newsom-era “Care Not Cash” program. One of the more controversial aspects of The Gav’s teetotaling local legacy, it cuts participants’ monthly welfare checks from $422 to $59 in exchange for providing shelter and other services.

While the chronic Poors under city “Care” no longer have the cash for, say, a bottle of Newsom’s PlumpJack Cab’, the money saved ostensibly funds affordable-housing requirements. Critics, however, say the program’s success is essentially defined by the number of rooms available, not the ongoing stability of the Section-8 tenants therein or the improvement of their quality of life (from the lady taking her pants off in front of a crowded sidewalk cafe, to the dude raging on an unfortunate newspaper stand, tenants of these city-run SROs aren’t exactly under “managed care.”)

Firefighters outside of Gestalt, dealing with the aftermath caused by the errant fire alarms.

Perhaps no business owner outside of the Tenderloin is more aware of the “Care” deficiency than Hawkins. One of Sixteenth Street Hotel’s more prominent female tenants is a sporadic regular of sorts in Gestalt–that is, when she’s not sprawled out front yelling at onlookers or calling for an ambulance (yeah, that lady). “She’ll come in throughout the week, drunk, sometimes covered in shit, and try to take someone’s beer or just be a nuisance in general,” says Hawkins, who has tried tracking down her social-worker himself, to no avail.

But he, like many of us, is pretty used to encountering crazy, sometimes cracked-out peeps shuffling along city streets (it’s part of San Francisco’s unique, urine-scented charm, no?) The regular triggering of his building’s fire alarm and sprinkler system during business hours, however, is another story. “Between all the water damage, replacing electronic equipment, furniture, and–mainly–the lost income from having to shut down and clean the place, it’s cost me tens of thousands of dollars out of pocket–easily,” he muses.

But while the oft-beleaguered business owner can rather calmly tick off various incidents over the years (the drunk-in-an-overflowing-bathtub snafu that brought down half of Gestalt’s ceiling on Cinco de Mayo ’08, the dude who fell asleep with a cigarette in hand and ignited his bed, trash thrown from windows catastrophically clogging the rain gutter…), what actually gets a rise out of him is pondering tax dollars pissed away on the constant SFFD and EMT resources needed to quell his upstairs neighbor’s constant shenanigans: “It’s unreal. I see so much time and money and manpower wasted–and that’s just on this block. The sad thing is that a lot of this crap could be avoided if the city was actually doing its job and providing the proper resources for these people. It is bullshit, man; total bullshit.”

As if on cue, our conversation is cut off by the siren of an approaching ambulance, and–I kid you not–it stops right in front of Gestalt. Hawkins stands up and looks at me knowingly. “I’m telling you, this shit was not in the brochure.” With a half-smile/half-grimace on his face, he shakes his head and starts to head back behind the bar. “You want a beer?”

I’d be shocked if they spent more than a thousand dollars on the furniture and pool table.

If they moved somewhere else, they’d probably get complaints about the noise, people smoking outside, etc. Being under an SRO might suck, but it also means you can get away with just about anything.

wow, this is definitely one of the better posts i’ve read on here, despite that joker adamski up there. good work jen.

one of things that complicates this situation is that while the city funds a portion of these units/buildings, they are often managed by 3rd parties. The issue then becomes a problem of proper services and management. A lot of the housing providers in SF are good at what they do and run full service programs beyond property management. Many of these services are catered specifically to the population living in the building they serve…seniors, mentally disabled, low income families, transitional/formerly homeless, etc. The situation you describe above is likely the example of a 3rd party who is not providing the appropriate level of service whether it is due to bad management, negligence or lack of resources. In my experience, most of the worst buildings are managed in a way to avoid as much local oversight as possible. These buildings could have very little in the way of city funds and may be the result of private owners who are following the slumlord model of as little investment as possible in their building/tenants….you end up with cheap housing, but very little in the way of programs or services for the people living there.