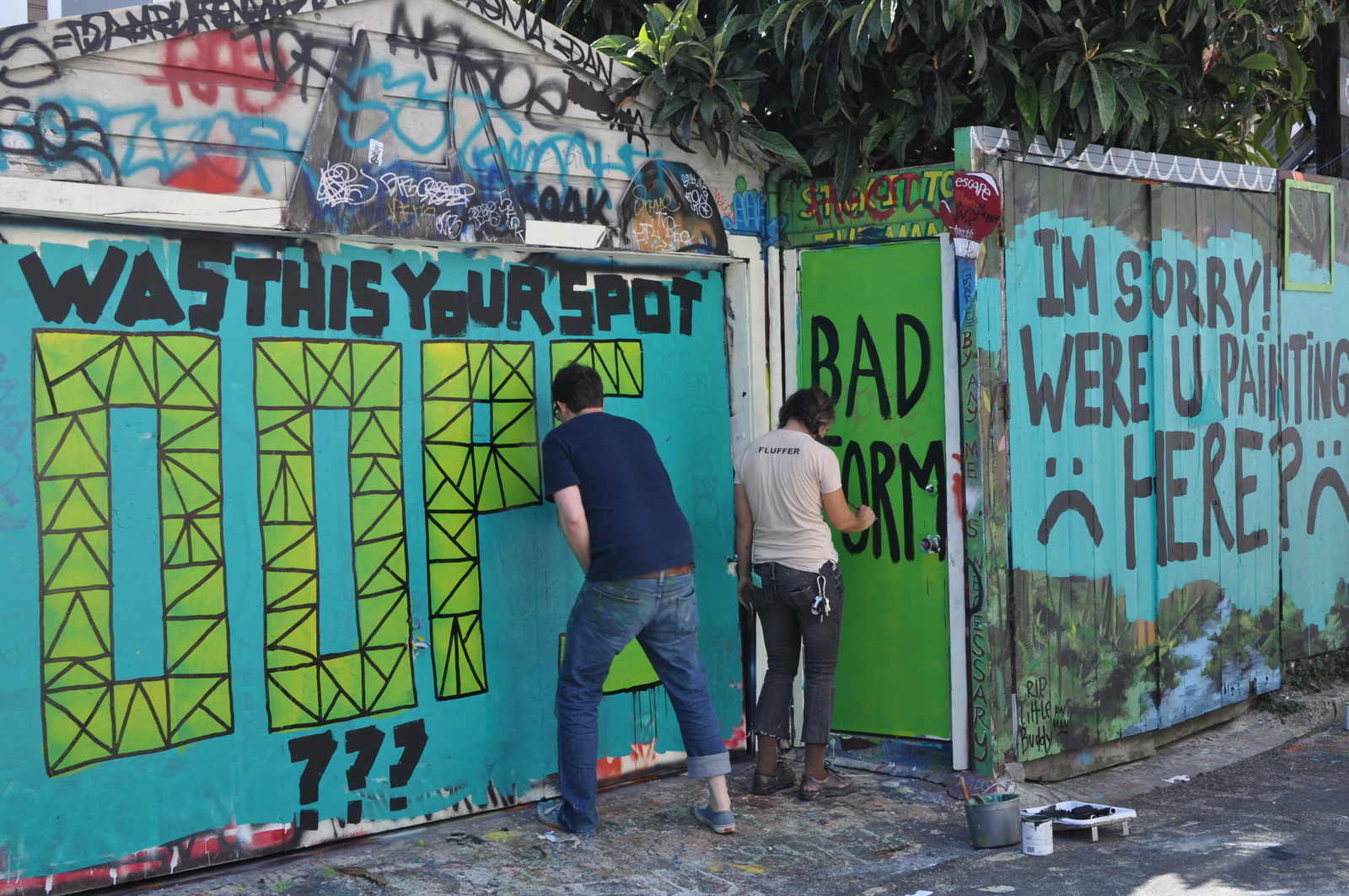 It seems that painters in Clarion Alley are finally growing tired of dealing with bombers vandalizing their murals.  These two muralists, whos names I won't publish to protect their other works from retaliation, saw a mural they began painting yesterday irreparably destroyed last night.

“We had a sign over the mural saying it was in progress and to respect it, but someone threw up a giant piece over it anyway.”

They've given up on painting in the alley and are in search of a new place that they can help establish a new mural project on, but they decided to leave the alley and its taggers with a parting gift before bouncing.

This is some serious PBS Frontline level shit here dude. FBI/CIA/Interpol/Starship Enterprise and The Economist should be coving this like your mom.

This is a case of someone saying “I shit on your piss.” Painting “Bad Form”? Like you’re in some lame blog commenting area? Amongst a bunch of graffitti artists like that’s a real group of upstanding citizens or something? Do us all a favor and take a shower.

See? This is why it was a criminal act on the part of CalTrans or whoever was responsible for demolishing Washington Packing; plenty of space, plenty of history and remote enough that the scumbag crackheads and marker-toting boy bitches from the burbs wouldn’t fuck with it.

I would eat steak while watching them all gladiator each other to death.

graff dudes are still in the right with this shit

This is why we can’t have nice things, people.

Perhaps they should put a fence on either side of the alley and charge admission.

i’ve been painting on the streets for almost 7 years now. grew up in the burbs so i used to spend a lot of time on message boards and the like, talking with kids everywhere about making the streets prettier.
taggers are a different breed, some of them actually care for their work as an artist would – meaning they put time and energy into the aesthetic of their scrawl. the ones who are just doing it for shits and giggles will most likely quit sooner rather than later.
i’m trying really hard not to make gross generalizations here but either way, ANYONE who knows anything about graffiti, wheatpasting, tagging, whatever, knows that while it is a competition in some regards, we’re all in this together. we’ve got a common goal and it is to make the walls less boring!
the transient nature of graffiti means your shit is gonna get painted over or someone is gonna slap a stencil on it – that’s how it works. however, i totally support the ‘muralists’ in calling out the little shits who are scribbling on works of art. it’s just tacky. honestly, they’re lucky this is all that happened – if they got caught up pissing on a hardcore graff artist’s mural, they’d probably get the shit beaten out of them or worse :/