SFMTA Releases a Bunch of New Scans of 1906 Earthquake Photos 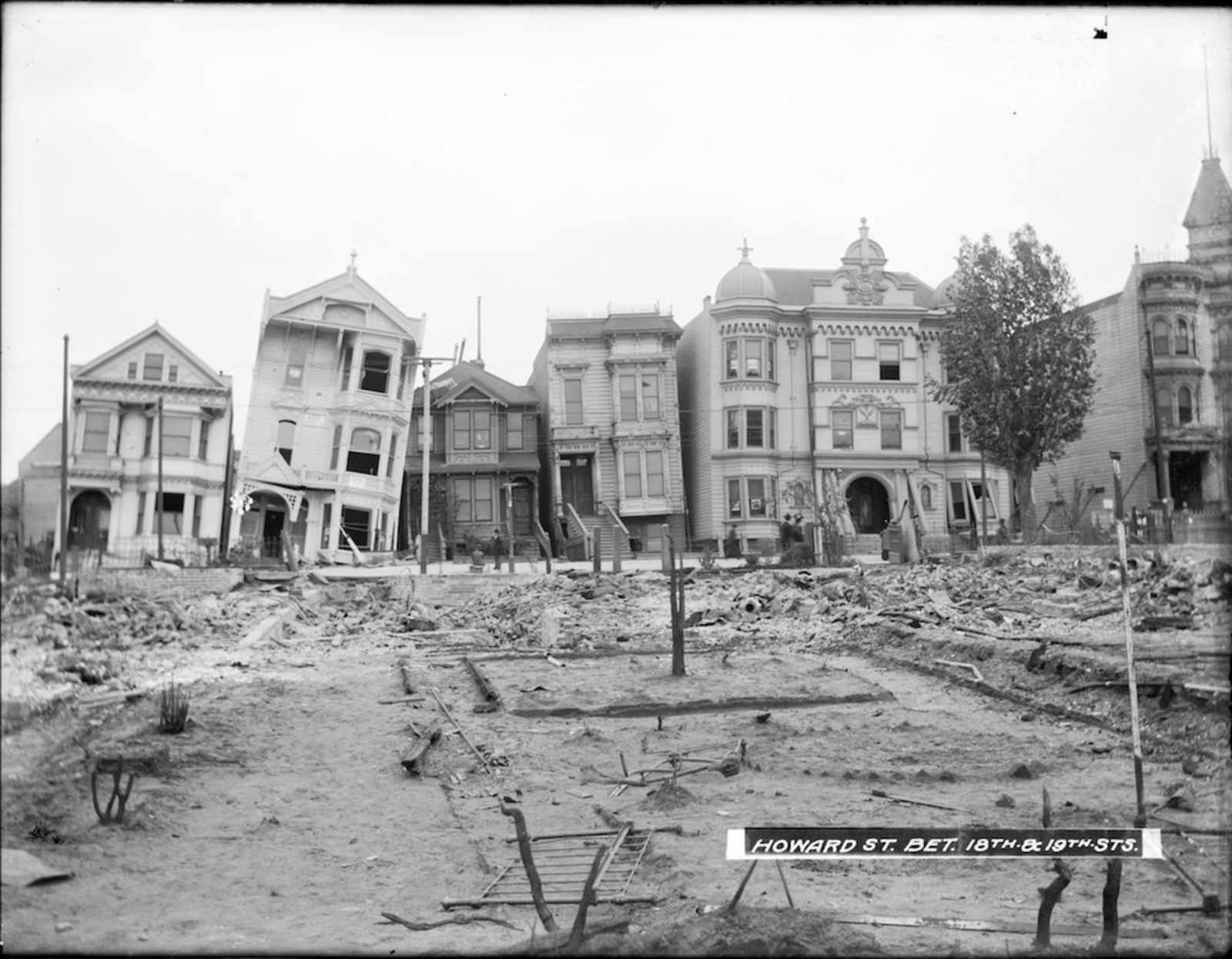 SFMTA seems to have abandoned their old policy of locking away their collection of 4077 photos taken following the 1906 Earthquake and Fire and have begun scanning the photos and posting them to Flickr.  According to the Chronicle, the photos were taken by John Henry Mentz, the photographer for United Railroads, the city's transportation operator at the time:

Most of Mentz's pictures were locked away in files for years, and many have never been published before. They show the destruction of the city - and particularly of its cable car and electric streetcar system - together with work to rebuild public transit.

Of course, most of these photos remain in a small room in MTA's office; however, they seem to be slowly changing their tune.  Below are some of the highlights of what they've released thus far: 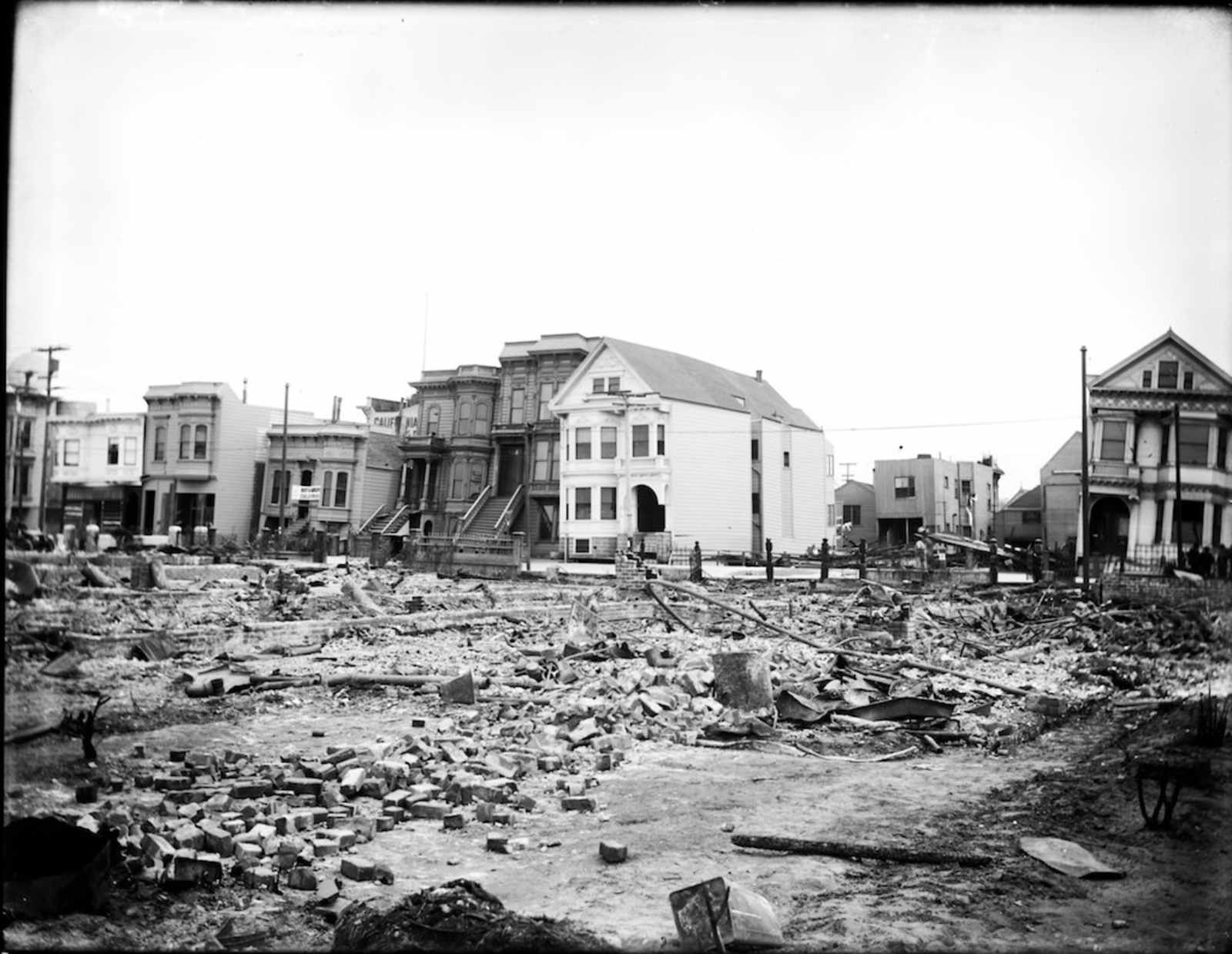 Another view of present day South Van Ness at 18th. 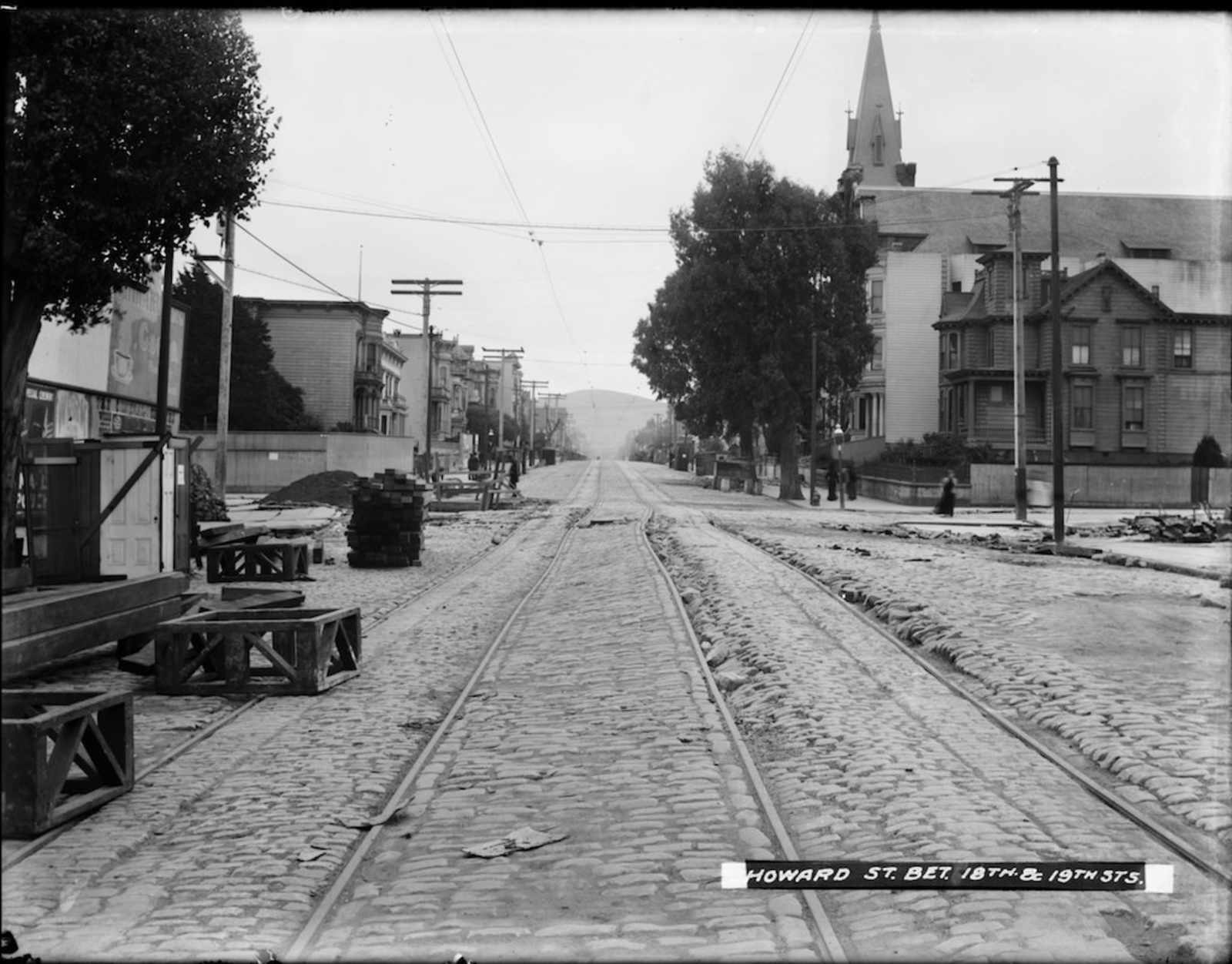 What is now the corner of South Van Ness and 19th, looking south to Bernal Heights.  The house on the right in front of the church is currently home to Bender's Bar. 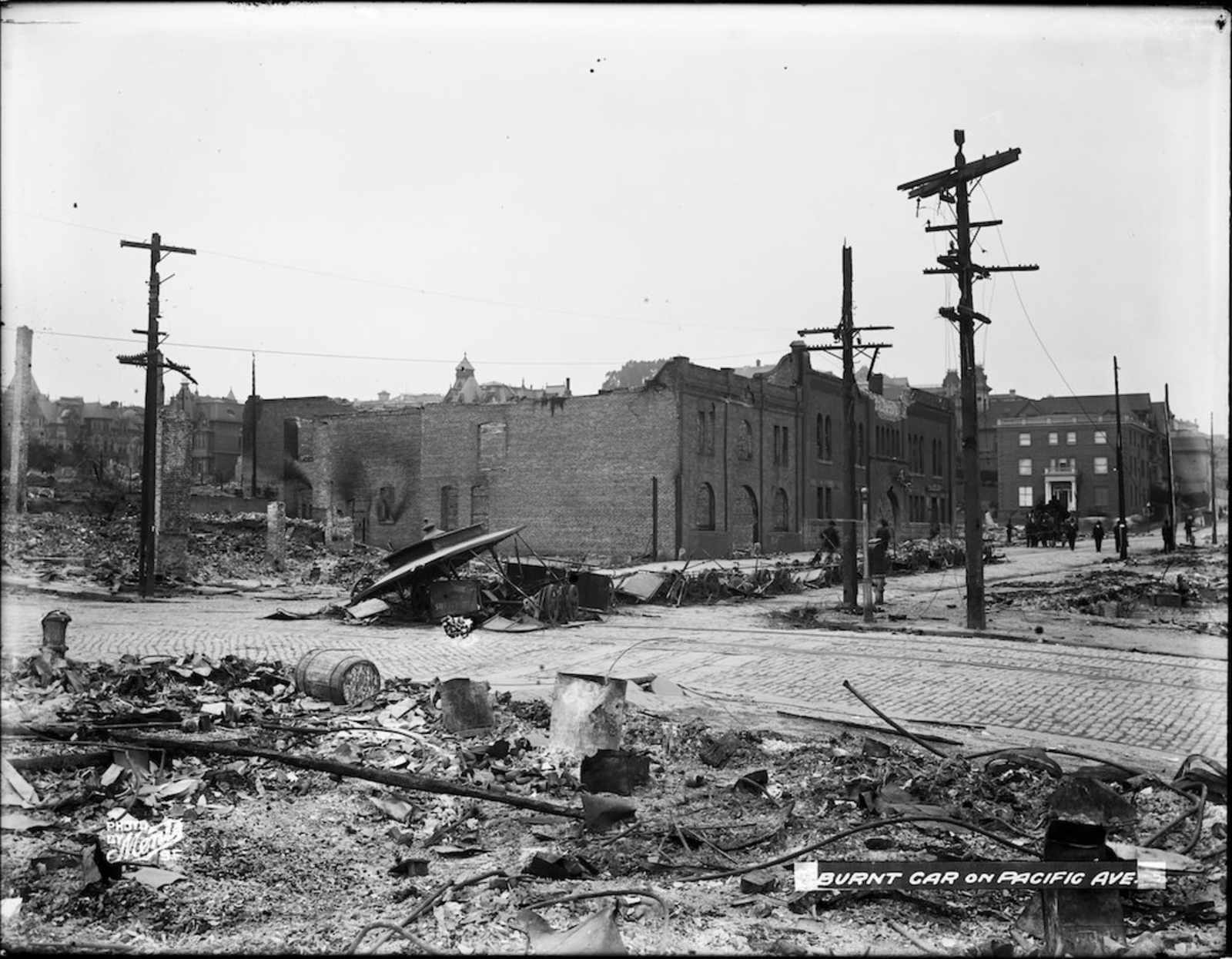 A train burnt into the road. 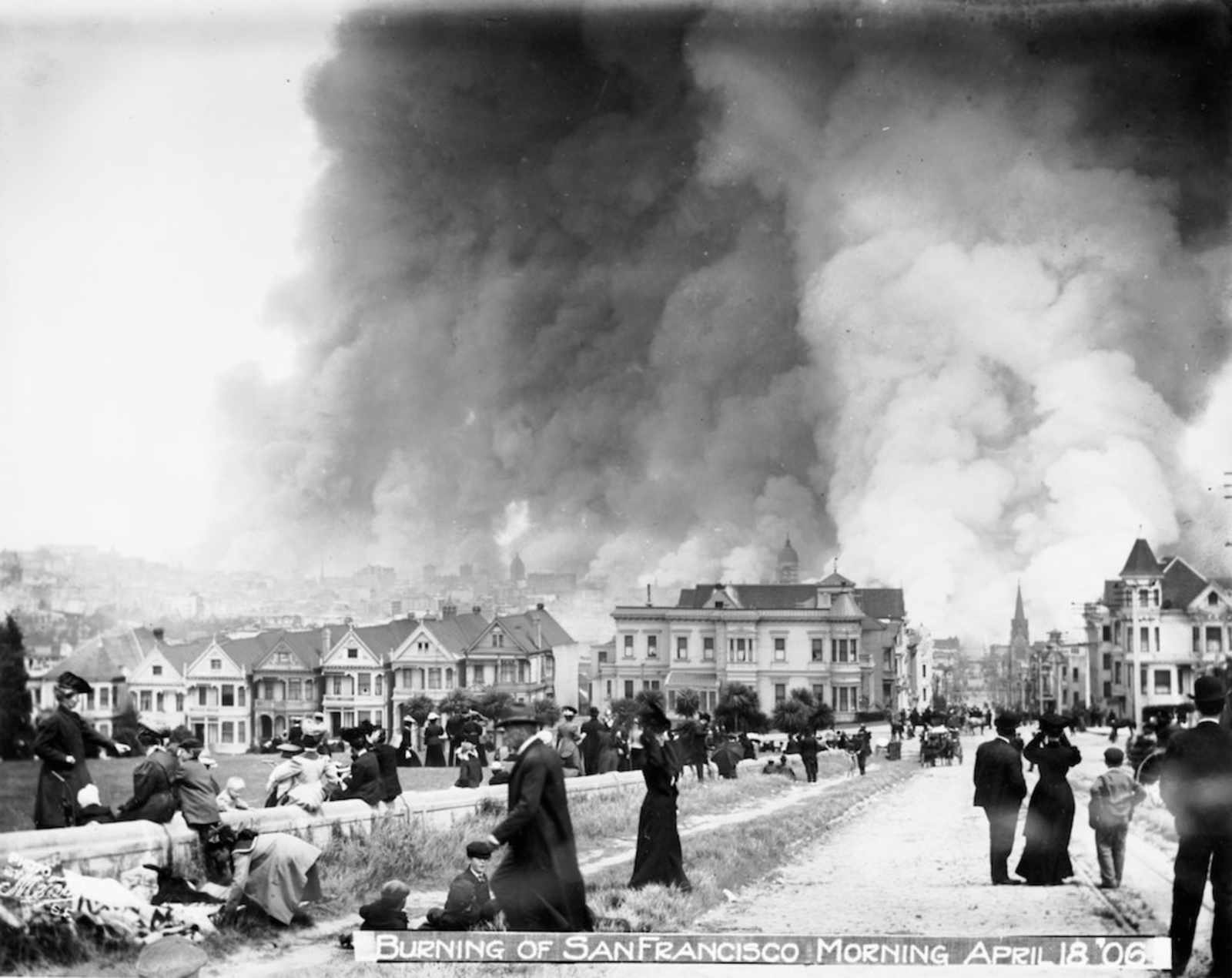 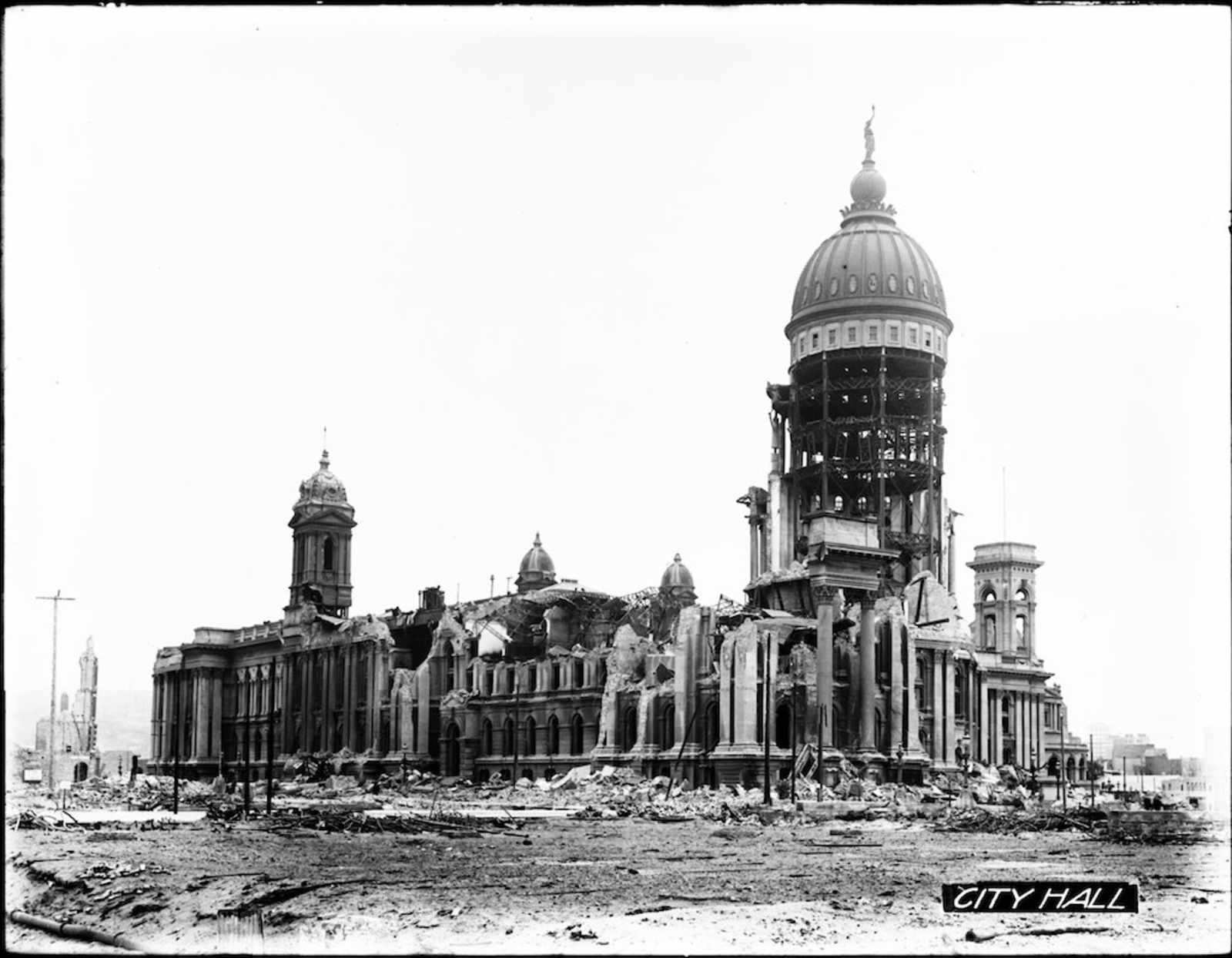 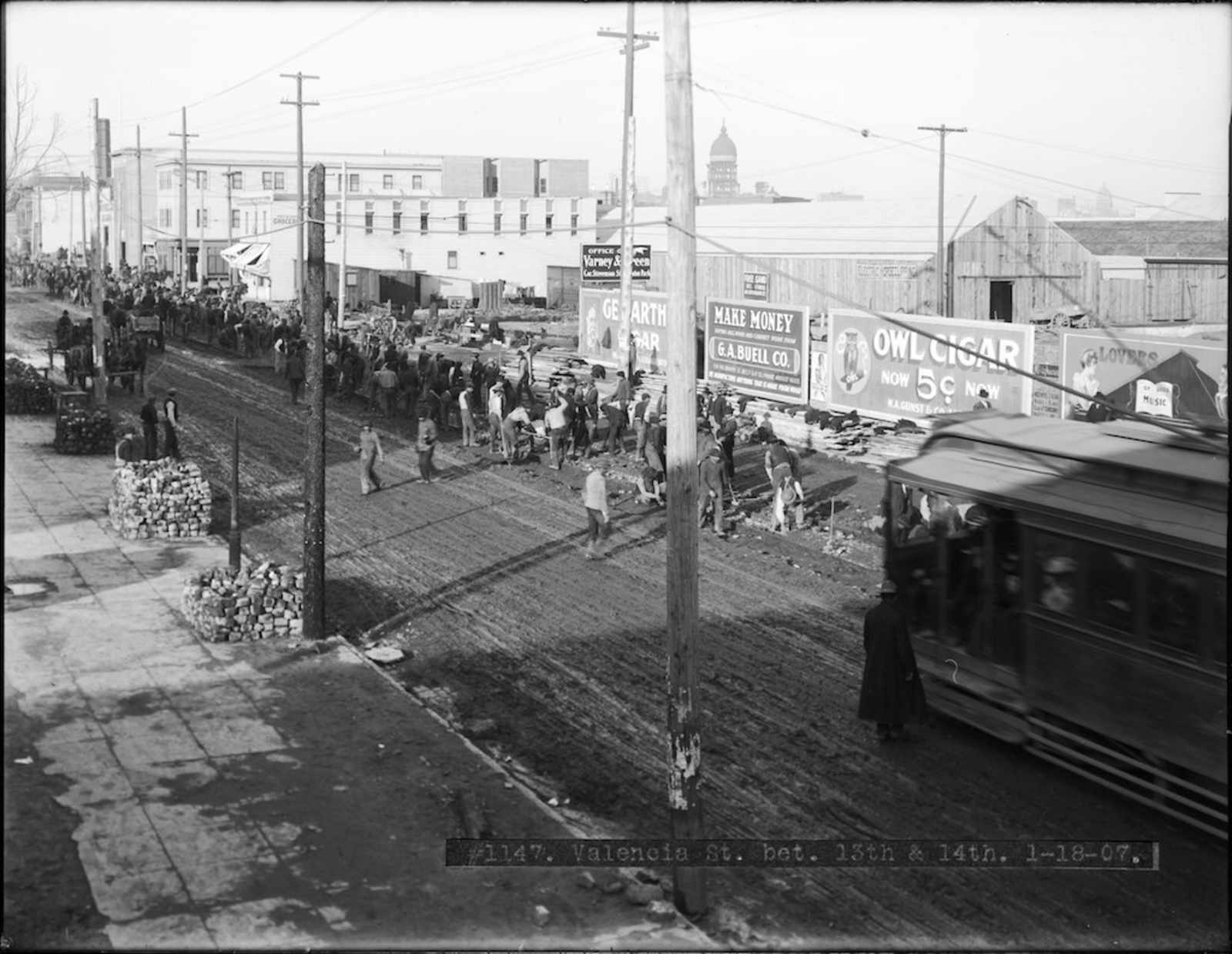 Rebuilding Valencia Street between 13th (present day Duboce) and 14th.  Off in the distance you can see the ruins of City Hall. 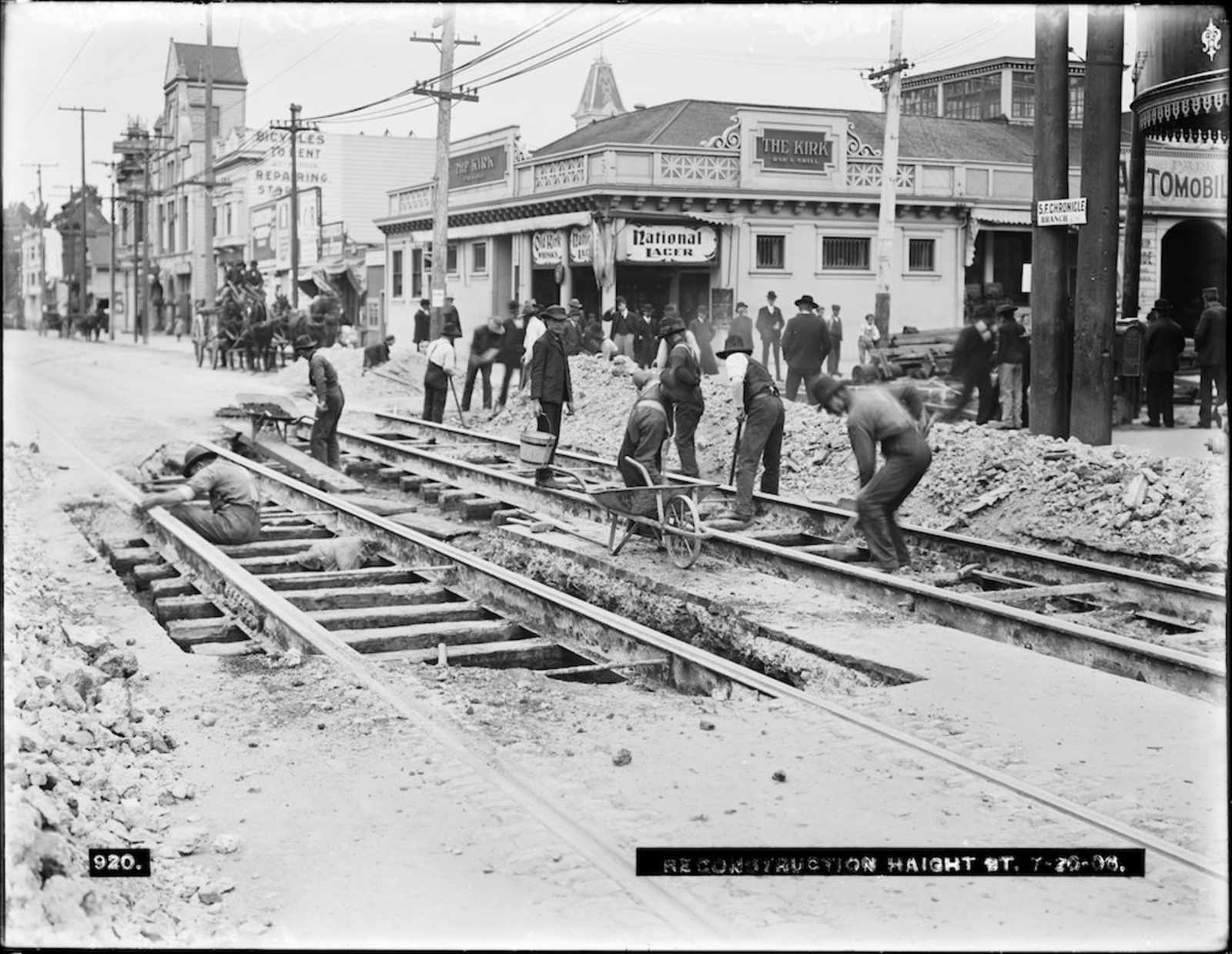 Rebuilding Haight Street at the present-day McDonald's and Whole Foods. 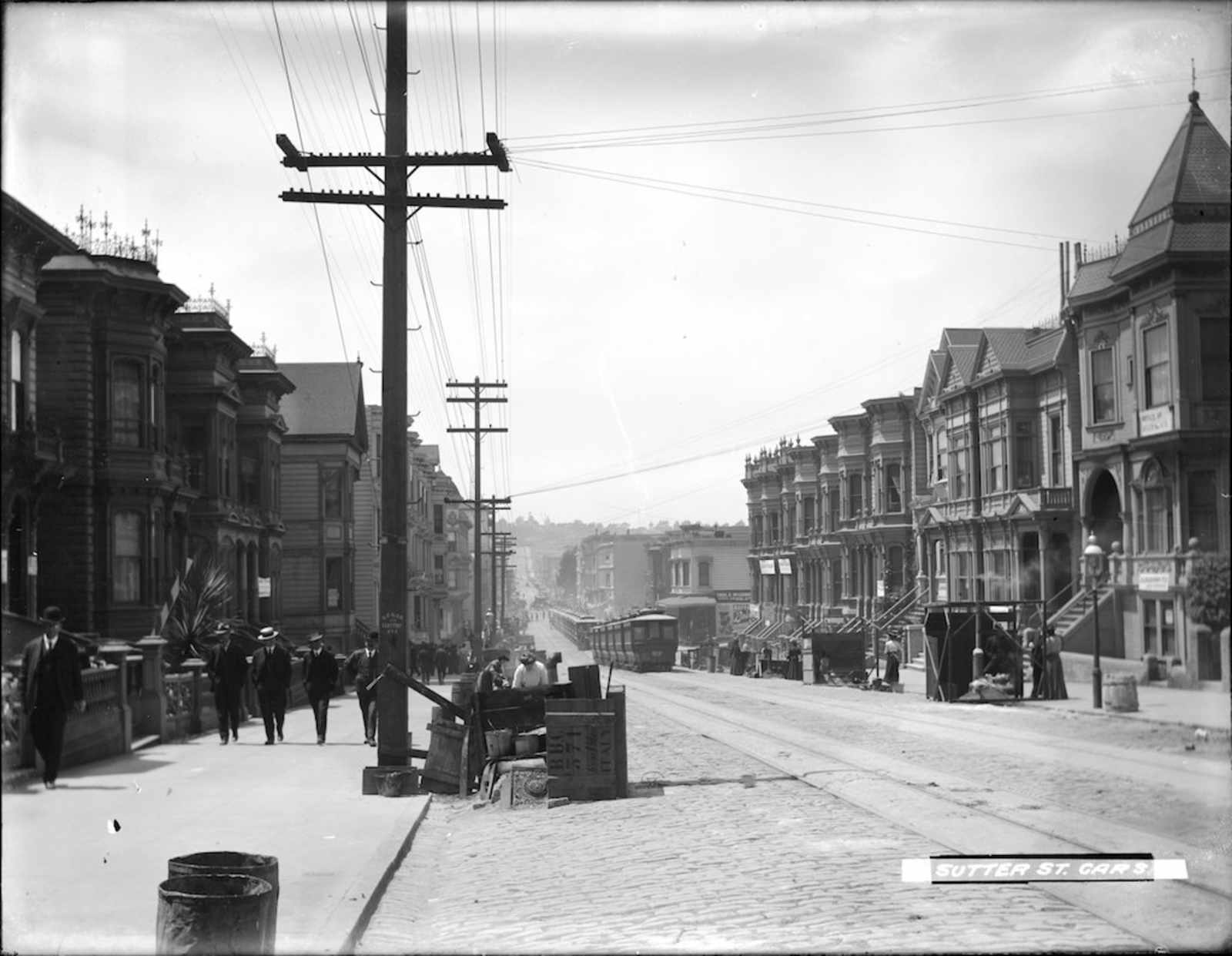 While there isn't anything particularly shocking about the above photo of Sutter and Steiner, it's interesting to compare this block in the Western Addition to what it looks like today: 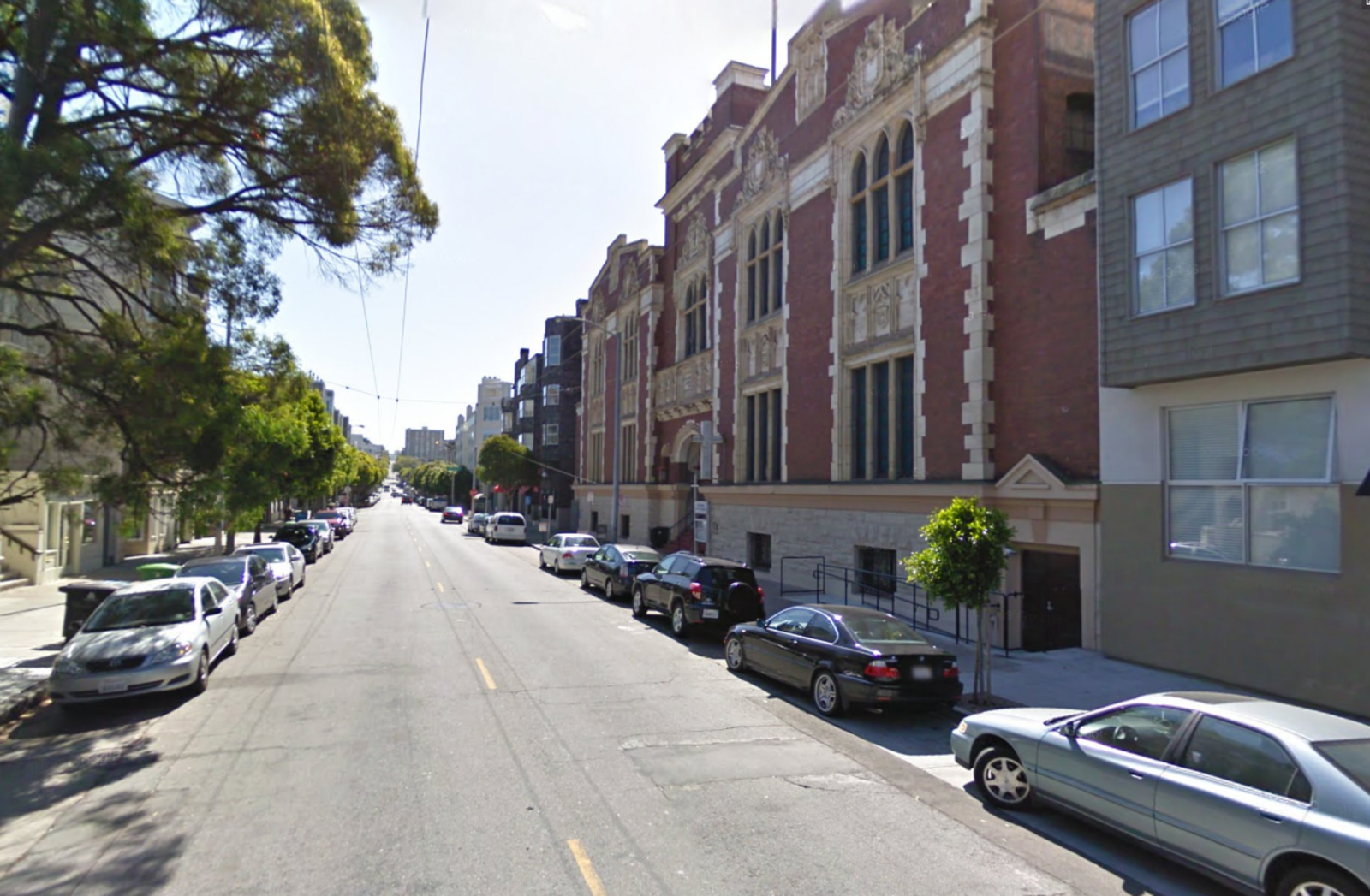 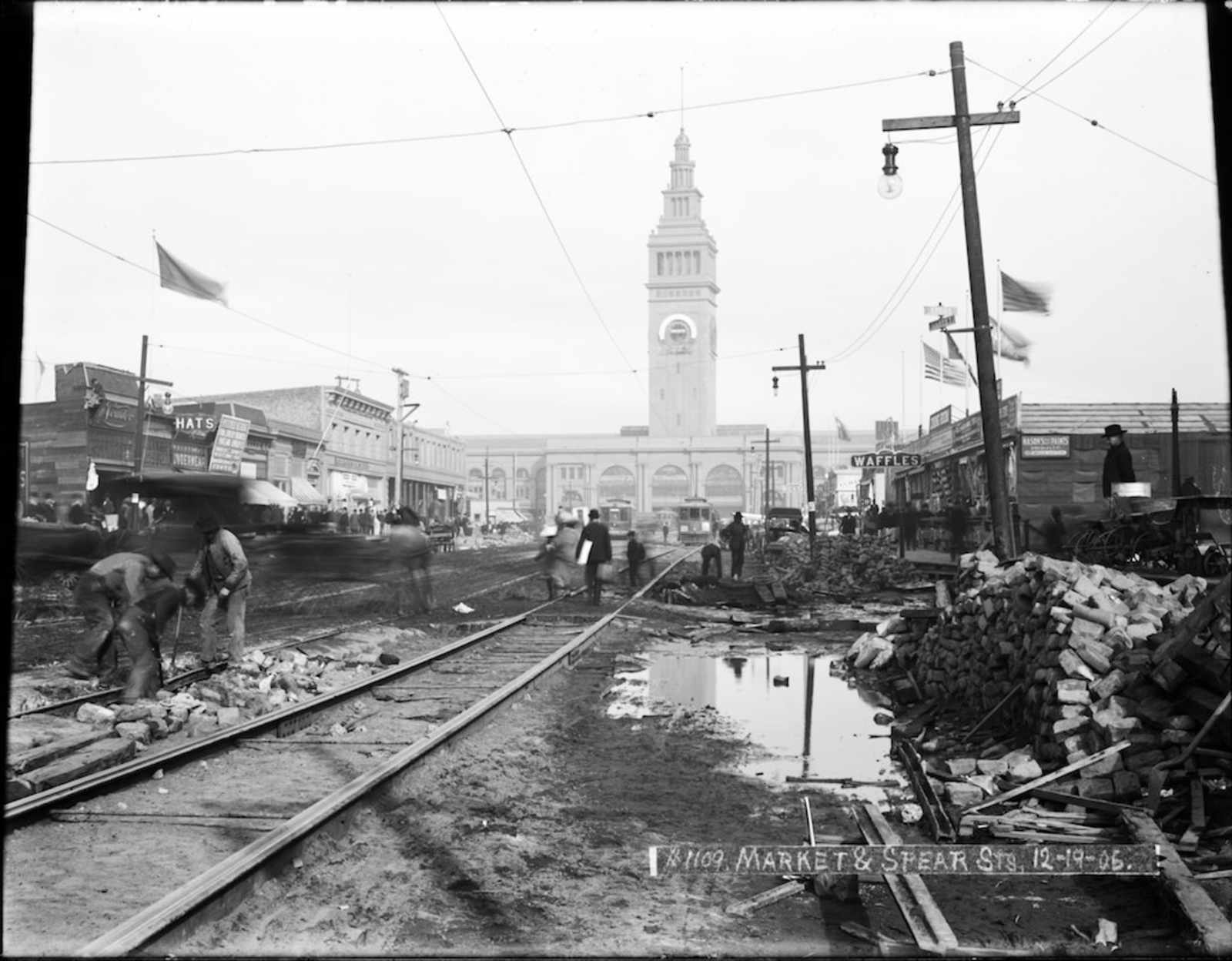 Finally, it's good to know you could still buy waffles near the Ferry Building following the quake.

Are you sure that is where Bender’s is? Because I think you’re off by a block. That house on the corner actually occupies the current location of WHIZ BURGER. See:
http://tinyurl.com/6yakgr2

You know, I think you’re right… I believe they mislabeled the photo (if it was taken between 18th and 19th and is looking south, it would have to be capturing the intersection at 19th… they likely meant between 17th + 18… as the design of the steeple looks the same).

You know what, I take that back. SVN south from Whiz Burger is more of an incline… I’m not so convinced.

It’s not just the steeple that is the same (right down to the trim) but also the surviving house in between the church and Whiz Burger looks the same.

I don’t think that the photo is so much MIS-labeled as it is MISLEADINGLY labeled. It says “between 18th and 19th st”, and that is basically what it is showing in the CENTER of the photo (as Whiz Burger sits at the corner of 18th and S. Van Ness.)

that is to say, it is taken from a vantage-point maybe ¼ of the way up the block NORTH of 18th st.

Look for the columns on the house in front of the church. A little hard to see since our 1906 friend took the picture on the opposite side of the street as Mr. Google Car. Here’s a different angle of the building and the church (from 18th looking SW) to make it easier to see the columns.

Very cool. This is an example of a simple thing the MTA could do that would make everyone happy and cost them nothing, and instead they just let this incredible history resource sit in a box. You’ve got to wonder what else they have hidden that might be cool to check out.

If the earthquake and fire had happened today, the entire city would have been eminent-domained and sold to a developer with financial ties to city hall. They then would have proceeded to build giant concrete buildings that took up entire blocks.

Side note: Sutter and Steiner is not Lower Haight, more like Western Addition/Lower Pac Heights.

Agreed. That’s not the Lower Haight at all.

correct me if i’m wrong, but anyone notice now the first photo is labeled howard st. between 18th and 19th streets. just where is that by the way? were streets renamed after the quake/fire?

southern part of Howard St was renamed “South Van Ness”, yeah. Not cuz of the quake though, but apparently more because people thought that Howard St. had a negative connotation that they didn’t want to be associated with.

I don’t think it really had anything to do with negative connotations for Howard Street. The city government had been trying for years to connect the south end of Van Ness to *something* instead of having it dead-end into Market. A lot of the plans were going to connect it to Capp instead, but it ended up connecting to Howard mostly just because it was closer and therefore less expensive.

That’s possible. I don’t have any factual references, it was just the story that I had always heard, that essentially merchants and residents of what is now S. Van Ness petitioned the city to change the name because they didn’t want to be associated with the negative connotations of Howard St. in SOMA (which, at that point, was the heart of skid row).

Check out the “Bicycles for rent” sign in the Haight Street picture.

That’s literally true. I’ve been there. It’s intense. Here is that office:

Why are they being so stingy about releasing these photos? They’re amazing and I want more! More! More!

Same with the SFPL. I also want them to be scanned in at MUCH higher resolution!

It’s not so much stingy as worried about copyright and rather disorganized. (More of the latter, actually.) Remember, this is Muni we’re talking about here…

The photos of Sutter and Steiner are looking in the opposite direction!

What’s amazing, is how the buildings on the right side of the 1906 photo look pretty much the same today. It is the left side that has changed as shown in the recent photo.

Here’s a photo of that “small room” where Muni/SFMTA keeps all its photo treasure. We could get lost in there for a very long time.

Is there anyway to purchase prints of these photos? The one taken of the city burning from Alamo Square is hanging in a cafe around the corner from my apt. I have asked where they got the photo but no one seems to know. Can anyway offer some advice. This would look pretty sweet in my apartment.

I doubt it. The sfpl has a way to buy prints online, but I doubt MTA has their shot together

A great find, thanks for posting!

wow, that picture of the Western Addition is very sad. No earthquake damage – just destroyed by urban renewal. sigh.

Now SFMTA uses South Van Ness as there personal drag strip. Their policies have turned the street into an unsafe street. The traffic is way too fast and the buses are reckless.