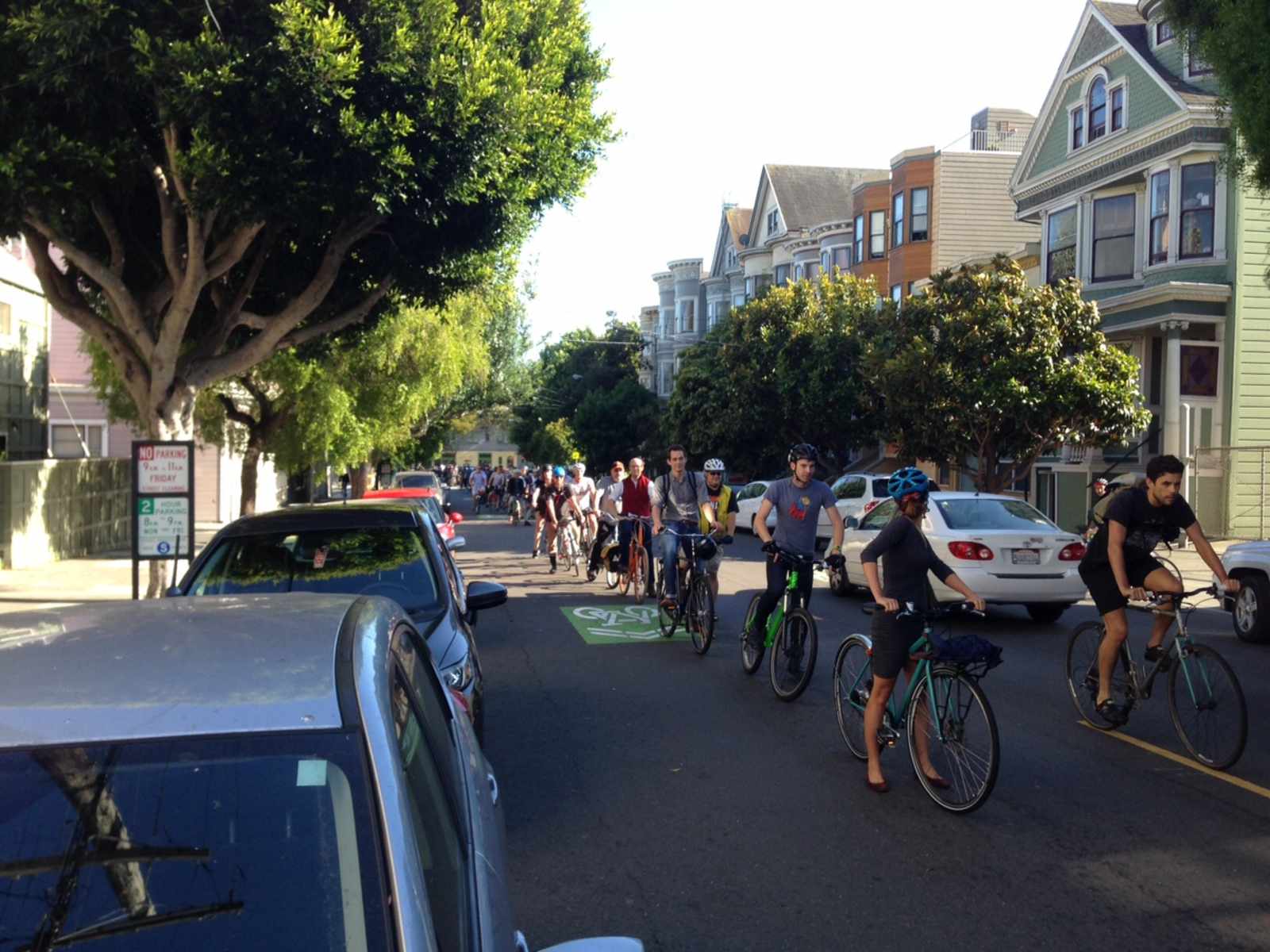 Last night’s Wiggle Stop-In brought well over a hundred cyclists out in protest to the highly-trafficked bike route known as The Wiggle. The event, planned by a community organization called The Wigg Party, was an attempt to demonstrate the effect on traffic of every cyclist coming to a full and complete stop at each stop sign along The Wiggle.

The protest was in response to a recently announced plan by SFPD Park Station Captain John Sanford to target cyclists and pedestrians for ticketing in popular areas like the Panhandle and The Wiggle. Captain Sanford has been accused of intentionally misconstruing guidelines originally designed to protect pedestrians and bikers in order to crackdown on cyclists who fail to follow the letter of the law when stopping at intersections. 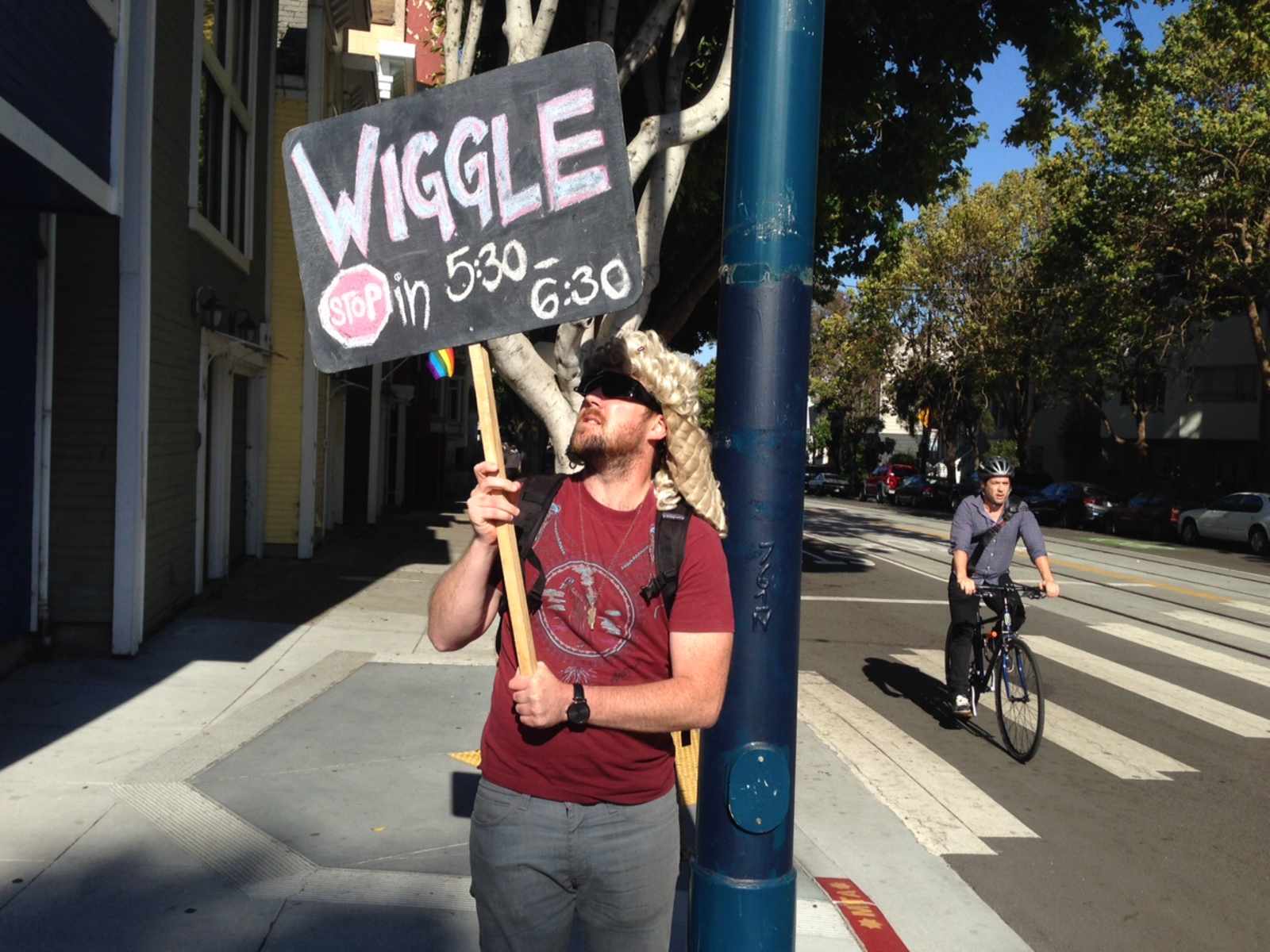 Morgan Fitzgibbons, the man behind both The Wigg Party and last night’s Critical Manners, explained to Uptown Almanac the goal of the Wiggle Stop-In.

“We are demonstrating the absurdity of the stop sign law as applied to bicyclists. Our goal is to get the Idaho Stop adopted as law in San Francisco.”

The Idaho Stop refers to the Idaho law which allows cyclists to treat stop signs as yield signs, and red lights as stop signs.

And in what will come as a surprise to no one, some motorists became upset when confronted with cyclists stopping fully at every stop sign. Several drivers, like the taxi pictured below, whipped around the queued bikers and gunned it the wrong way to escape the scourge of law-abiding cyclists. 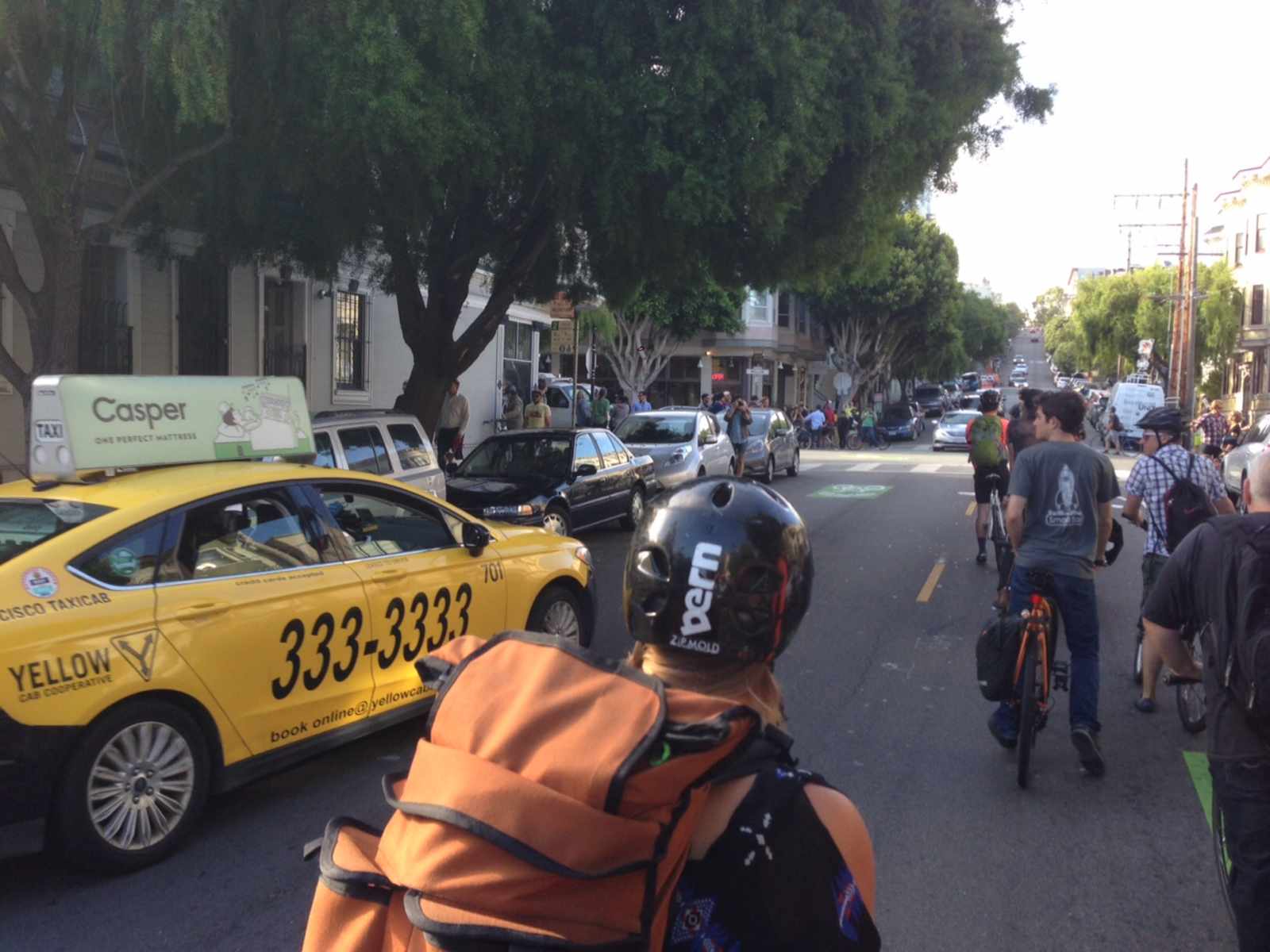 That the taxi almost hit an oncoming car didn’t appear to faze the driver, who then proceeded erratically through the intersection.

With the stated goal of gathering fifty to one hundred cyclists well surpassed, last night’s turnout exceeded organizers’ expectations. What remains to be seen is what effect, if any, the protest will have on Captain Sanford. With District 5 Supervisor London Breed coming out in favor of the Idaho Stop, Sanford has some political cover should he decide to back away from his anti-cyclist/anti-pedestrian stance. Then again, maybe he’ll just write the Supervisor a ticket the next time he sees her rolling a stop.

Yeah I see London Breed on a bike ALL THE TIME, and yeah sure, she’s a biker!

Keep telling yourself that….then be sure to vote for her soon! she’s a real “progressive” on your issue!!!

Stupid suburban white kids with to much time on their hands. Go back to your flyover states please.

Tall words coming from a guy with a photo of the suburbs as his avatar photo.

Yep, the suburbs of Mariposa and Florida, you dumb ass.

My old corner. I lived there for the demise of the Animation Gulch and the horrible few months they tried to rebrand those few blocks “Potrero Flats”

they need to obey the laws so pedestrians are safe.

Yeah. I’m sure they’ll get on that right after cars, busses, delivery trucks, pedestrians and cops all start obeying the laws as well.

Nice to see things like this can still be mobilized in SF.  We probably couldn’t do something like this anymore http://www.bbc.com/news/world-us-canada-33724405 but I’m glad we have our moments.

This artificially created traffic jam is not representative of common cyclist populations at one intersection at a given time. The Idaho Stop Laws work only because there are not as many pedestrians and vehicles on the roads in that region. San Francisco is an overpopulated urban environment and like it or not, most bicycle related injuries and deaths are caused by the cyclist practicing the Idaho stop at an intersection. Just like seat belt laws there are adjustment periods but this is for the safety of both the cyclist and the motorists as well as pedestrians. They are not victims of anything other than their own stubbornness, bad physics arguments and the lack of insight on how population density affects traffic safety.

Do you buy your truths at the same store as the global warming deniers>  They fit you well.

This was a demonstration of ENTITLEMENT disguised as a protest. The entire event was rigged to make a false point. 100 cyclists lined up at the same time in a single file line (queued up for over a block) to make a full stop at Steiner and Waller Streets. These ENTITLED cyclists who are demanding safer streets and shared roadway space want it both ways. They claim to be the equal of motorists, entitled to their equal share of the road. Yet they refuse to obey the traffic laws.

The Police Department has a civic responsibility to uphold the laws that are currently on the books and crackdown on red-light and stop-sign running cyclists. Cyclists should be issued tickets for moving violations, including disobeying traffic signals and failing to yield to pedestrians.

Cyclists have to make up their minds. Are they co-owners of the road, obliged to follow its rules? Or are they free spirits, obeying no rules and claiming no privileges? If cyclists want their share of the road, they can’t go on pretending that they are above its laws.

We are all  ENTITLED  to protest police actions  substituting   petro-politics for data based science.

Its appalling that Supervisor London Breed supports this type of recklessness from an “activist” group. Perhaps Supervisor Breed should acquaint herself with the values of the organization before endorsing their reckless disregard for the law.

There is an interview with the organizer at http://brokeassstuart.com/blog/2010/12/02/broke-ass-of-the-week-morgan-f…

Some people say that Drinking and smoking weed clouds a persons judgment!