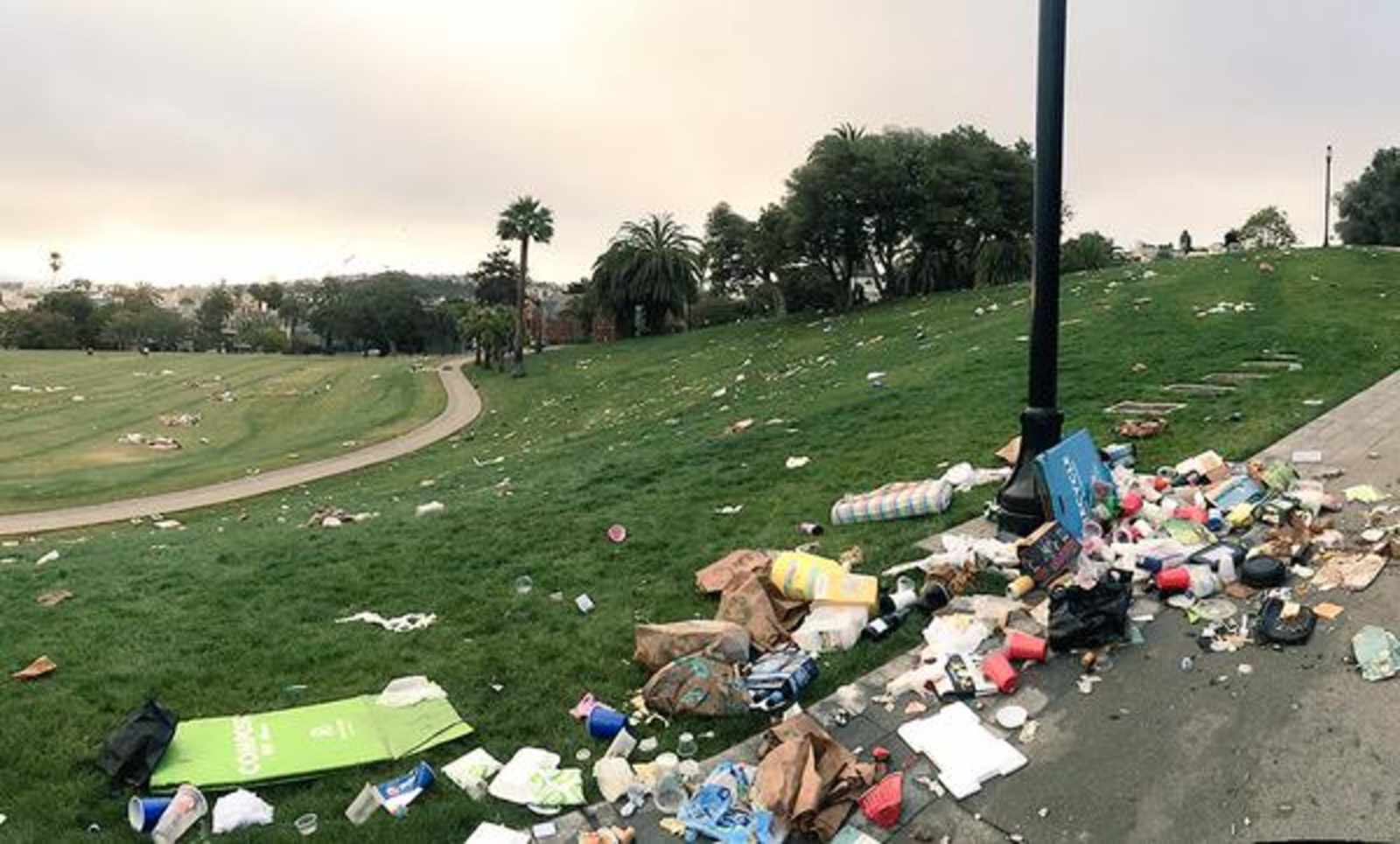 In what should come as a surprise to no one, neighbors are not happy with how Pride revelers left Dolores Park this past weekend. Dolores Park Works, a non-profit purportedly “celebrating, preserving and enhancing Dolores Park for all her diverse patrons,” went so far as to suggest closing the park.

@diwakergupta if the event cleanup crew and the March leave. We should close the park. IMHO

And while it’s totally fine to complain about people trashing the park, suggesting that the park should be shut down is beyond absurd.

Great job #dolorespark users, this is the mess you leave when you come enjoy the park on wkds. #sfparks #sanfrancisco pic.twitter.com/UaSayPQ4hj

Dolores park just got redone, yet no one respected it enough to pick up their trash after Pride. disrespectful.

In a blog post this morning, after taking twenty-four hours for some (perhaps sober) reflection, Dolores Park Works decided to spread the blame around:

Last year the Dyke March found a sponsor to fund a clean-up on Saturday. The park looked great. But there was no plan or organized effort for the following Sunday, Pride and The park was trashed.

This year I heard the Dyke March funding fell short and a clean up team was put in place literally days before the event. A much small and inadequate team. It is all well and good when these things happen behind closed doors and work well, but when there is a major fail we need to ask questions.

Pride, to keep this discussion focused, is supposed to be a City wide civic celebration. Yet less and less of the City, civic leaders and the LGBT Community step up to support and fund a plan to adequately host this celebration. This is not a Rec and Park problem, this is not the Dyke March’s fault. The City and it’s leaders need to step up.

In the hazy aftermath of this past weekend, at least one thing is abundantly clear: litter in the park is not a Pride-specific problem. As the newly renovated northern half of Dolores Park continues to draw huge crowds weekend after weekend, it would do us all well to keep this fact in mind.

It’s understood that a lot of thinking and planning went into not having trash receptacles in the park?

Having them just on the perimeter and putting the responsibility on park goers to pick up their trash when leaving, is just not realistic.

The evidence clearly shows this. Time to make some modifications to this plan before it gets a lot worse.

What do you think?

Let’s have drones that drop down from the sky holding bags, people can place cans and other garbage in the bags.  Also you can have an app which includes a button to call the drone

I don’t think its that big of a deal that after a huge event like a historic pride party, that trash is left behind.  Not that its a good thing, but yeah, its going to happen.

I am reaching out to Uptown readers for opinion if the new drainage systems is working.   Big buck were spent on drainage and I’m already seeing signs that it didn’t fix the problem.   What do you see on that??

DID SOMEBODY SAY BIG BUCK HUNTER?

almost.  since forever I’ve had trouble writing , and not leaving out a letter here and there.   Thanks for noticing.

I’m sure Robert Brust of Dolores Park Works meant to close it until it is clean, not forever, both as a practical matter so people can enjoy the park and perhaps as natural consequences for such appalling disrespect for the park.

Personally, I blame SF Rec and Park fully for the mess. Parks are their responsibility full-stop.

So you’re suggesting that Brust wants the park closed temporarily as a punitive measure? Please tell me how temporarily closing the park to all, with the intention of punishing the small minority of park users who litter, in any way comports with Dolores Park Works’ mission statement (emphasis added):

Dolores Park Works is a nonprofit park advocacy and service organization celebrating, preserving and enhancing Dolores Park for all her diverse patrons since 2009.

When a city of 800k swells to over 2 million for a historic pride weekend, what is the point in punishing the locals?  A major metropolitan center has a responsibility for hosting historic events for the greater area.

It’s good to know that self entitled, party animals that fuck shit up come from all walks of life.

SF is constantly stuck at the equivalent of being college age: on your own (finally), throwing parties, meeting people, having fun but never quite getting around to doing laundry or cleaning the toilet. It’s not just the parks.  Streets and sidewalks are a mess too. The residents and visitors should grow-up just a little and take some responsibility for public spaces.  SF Rec and Park + DPW can only do so much.  Ever see a techie sweep the sidewalk by their apt. building or pick up some trash?  Didn’t think so.

I think several things needed to be done.  As previous readers mentioned, there are events in SF every week.

1. educate by having signs to put garbage in the garbage can.  Most decent Americans does that. 2. make sure garbage cans in the park ARE NOT FULL! Many times the garbage cans are completely full.  How can anyone throw garbage? They can be filled up every hour.

Convert the park to landfill. Problem solved. Watch the techies and rats jockey for space to sunbathe. Spoiler: I’ll be pulling for the rats.

Shut down pride too much noise for tech married moms! Expand the child’s play area in the park to cover the entire park! Uptight rich white people need peace and quiet! Why do you think they moved here from the burbs?????

Close it during Pride …

“Pride” in this case refers to pride in not being tied down by things like civility and personal accountability.

You go, circuit boys! You show them how proud you are!