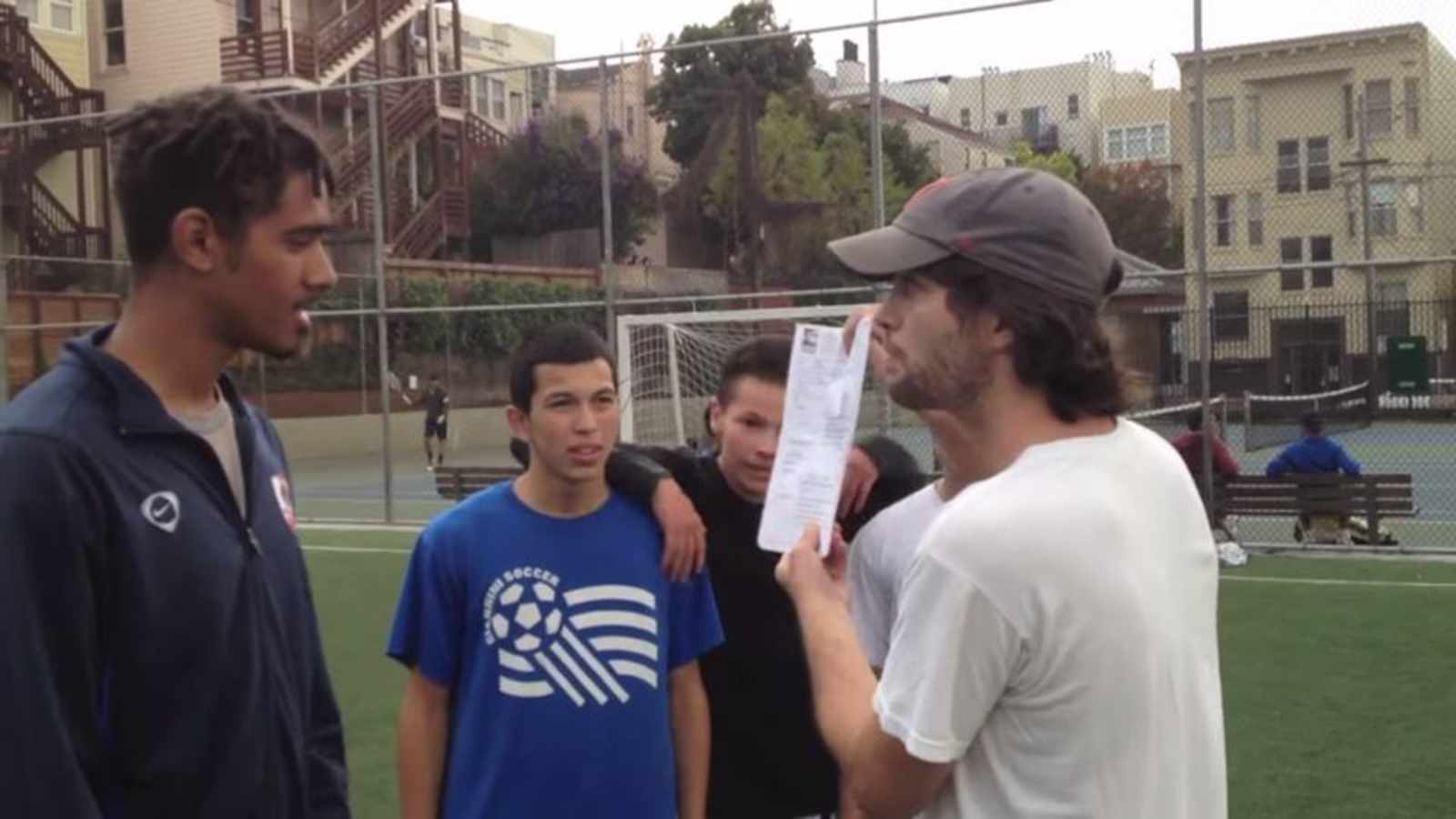 Following on the heels of last Thursday’s video depicting Dropbox and Airbnb employees attempting to kick a group of children off the Mission Playground soccer field, a protest has been planned by the San Francisco Latino Democratic Club challenging the city sanctioned system by which the tech employees reserved the field.

Scheduled to take place this Thursday at 9:00 AM on the steps of City Hall, the protest organizers state the following goals:

The youth of our city should not have to pay to use our public parks. Their health cannot afford it. Their safety cannot bare it. The relationships and community built from free play is what will help bring our City together. Join us and speak for the youth of San Francisco! Let’s keep our parks accessible to the elderly, disabled, poor and working-class.

The protest organizers seem focused not on the extreme sense of entitlement demonstrated by the Dropbox/Airbnb employees (some of which have apologized for their actions), but rather on the paid reservation system put in place by the Recreation & Parks Department, which fostered the conflict shown in the video. This is a good thing, as protesting the tech community is clearly a losing battle. And there is actually a chance that the city will take a look at their parks policies, which allow for the use of public space to be restricted to only those that can afford to pay for it.

Hey, a protest that actually tackles the cause of a problem, rather than its effects. How refreshing!

For years now, Rec and Park General Manager Phil Ginsburg has been working overtime to privatize and limit access to as many SF public parks as posssible, and this is just one of the latest festering pustules on the Ginsburg / Scott Wiener / Ed Lee / Mark Buell corruption machine.

We already pay a fortune in taxes and bonds for unrestricted access to our public parks here in San Francisco.

The people in this neighborhood already had a great system worked out for prioritizing who is allowed to play on this field, which was based on sharing and allowing everyone to play.

The problem here stems from greedpigs like Phil Ginsburg who cuts budgets for Recreation Center employees and gardeners while (with the help of Scott Wiener, of course) allocating millions of taxpayer dollars to six figure middle management, public relations hacks and an ever increasing recreation and park security patrol force. Meanwhile, Ginsburg wants to restrict park hours and charge you to use them.

As an additional bonus, Ginsburg and Wiener recently made it a crime for you to visit any of the public parks you pay for after the ungodly hour of midnight.

If you care about parks and don’t want to see brodouches and corporate parties kicking out children, feel free to contact Mayor Ed Lee and Supervisor Scott Wiener to give them some feedback on Phil Ginsburg and our parks:

Their health cannot afford it. Their safety cannot bare it.

What is the root cause of their poor health and safety?? TECH COMPANIES? Wait I don’t get it.

dont be daft. Ie they dont have access to a group activity that is healthy and fun they will turn to drugs and gang activity or something illegal. Im sorry you are white and do not understand  this

You are also encouraged to come to the soccer park on Tuesday evening to paint protest signs.

The Tuesday evening about 7 time is picked , so that people can witness for themselves what happens if the field is rented this Tuesday night.

I see how this would make the field more accessible to the poor and working-class, but how will this keep the soccer field more accessible to the elderly and/or disabled? In most pickup games people who fit that description on average may see drastically less playing time, and rarely get passed the ball. Seems like for their use case, it’s actually better to have some way to exclusively reserve the field so that you could have a seniors-only game, or a wheelchair game.

5) Here’s our plan to address the $30 million dollar budget shortfall that SFRPD faces each year.

I think unfortunately ‘pay to play’ is here to stay unless someone figures out how to get RPD a larger cut of tax money.  A protest may get it removed at one field just to make people be quiet, but it’s not going to change things overall.  The situation goes beyond the RPD commission.

This provides a pretty good overview of the funding situation:

That report is from 2011. The budget then was $129 million and the  budget for 2013-2014 was $160 million. Which means that the more than the $30 million  budget shortfall has been more than covered, not to mention the hundreds of millions of dollars from multiple park bonds passed in the last 10 years that continue to fund park improvements.

Phill Ginsburg is spending millions of taxpayer dollars every year on six figure middle management beareaucrats, public relations hacks and an ever increasing recreation and park security patrol force while crying poor. Rec and Park funding increases year after year,b ut we are told to accept reduced services and limited access to the public spaces we all pay for with our taxes.

We have more than enough money to provide for our public parks, it’s just being mismanaged.

The supposed need to accept privatization along with reduced access and being charged fees to use our own public spaces are all part of Phil Ginsburg’s big lie.

Almost every city in the world has free soccer fields.   San Francisco did too for decades.   But now that Valencia Street is in a boom, the City is too damn poor to keep the light on the field.  For sure.

There are plenty of OTHER parks these bros can pay to play, leave this one free and open.

If you would like to have more soccer fields in SF, vote yes on I!

“Their safety cannot bare it”? Even if that was spelled right, it wouldn’t make sense.

“About a year ago, San Francisco Rec & Park General Manager Phil Ginsburg and I met. He said that he wanted to bring the park system into the 21st century with an easy to use mobile app that anybody could use. We started to talk about features that he wanted from a mobile app, he said it had to include ticketing, reservations, permits,”

And let’s tear down the recently installed gate at the Strybing Arboretum too, keeping out “the public”.

“In a world where we’re getting less funding,” Park and Rec GM Ginsburg said, “the more revenue we earn, the more open and the more accessible our parks and facilities can be.”

To those with disposable income.