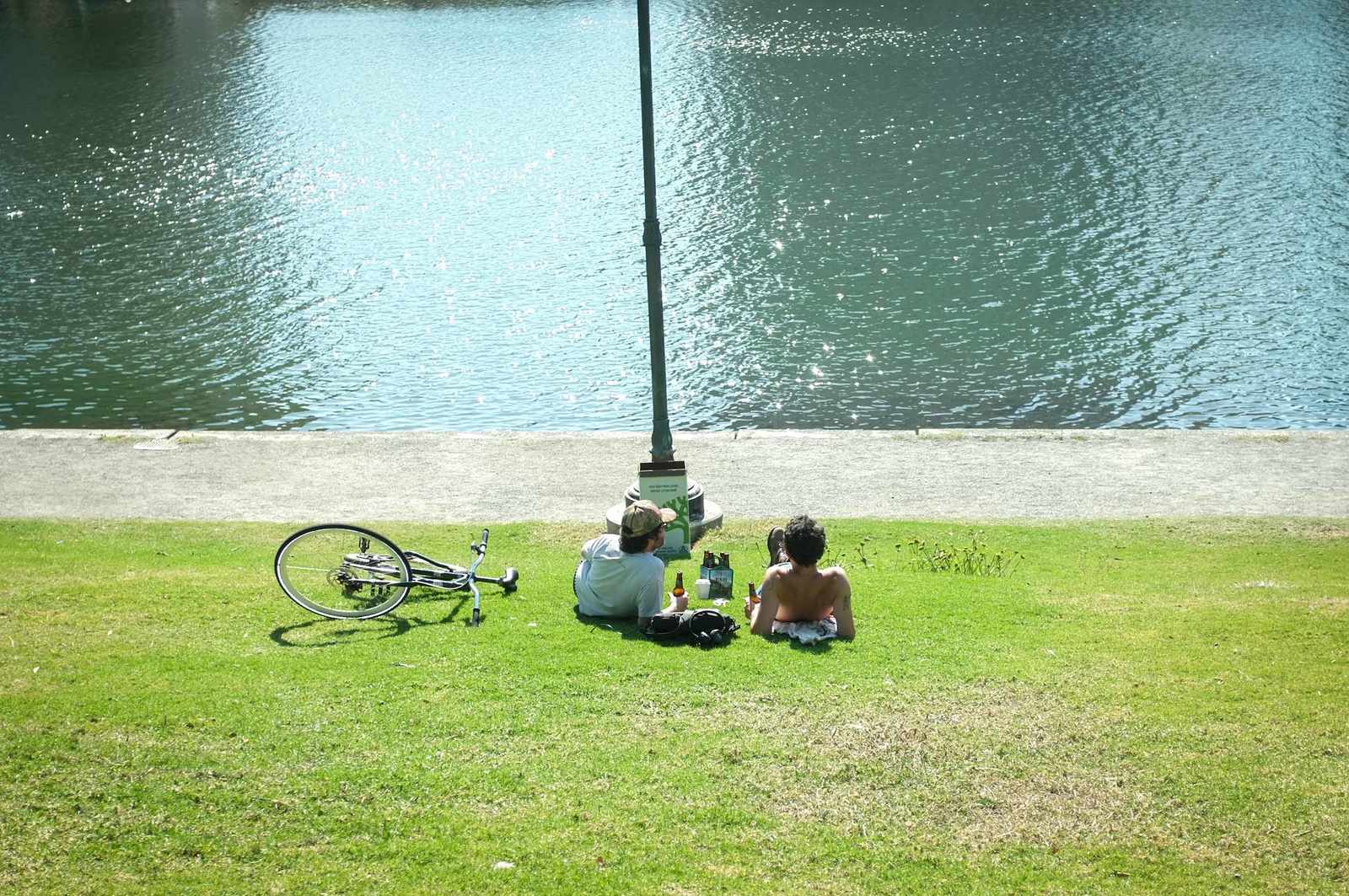 Well, let’s admit it: Dolores Park is fucked. As if the bulldozing wasn’t enough, buzz-kill narcs are actually busting people for drinking. Before you waste your breath arguing for your non-existent right to booze in public, take a little jaunt with me, just over the Bay, to a place I like to call Dolores Beach.

On the briney shores of Lake Merritt, there’s a strip of grass right under the Fairyland sign that 20-somethings have colonized in the name of aimlessly chilling about. Trust me: this should serve as a more-than-adequate substitute for Dolores Park. 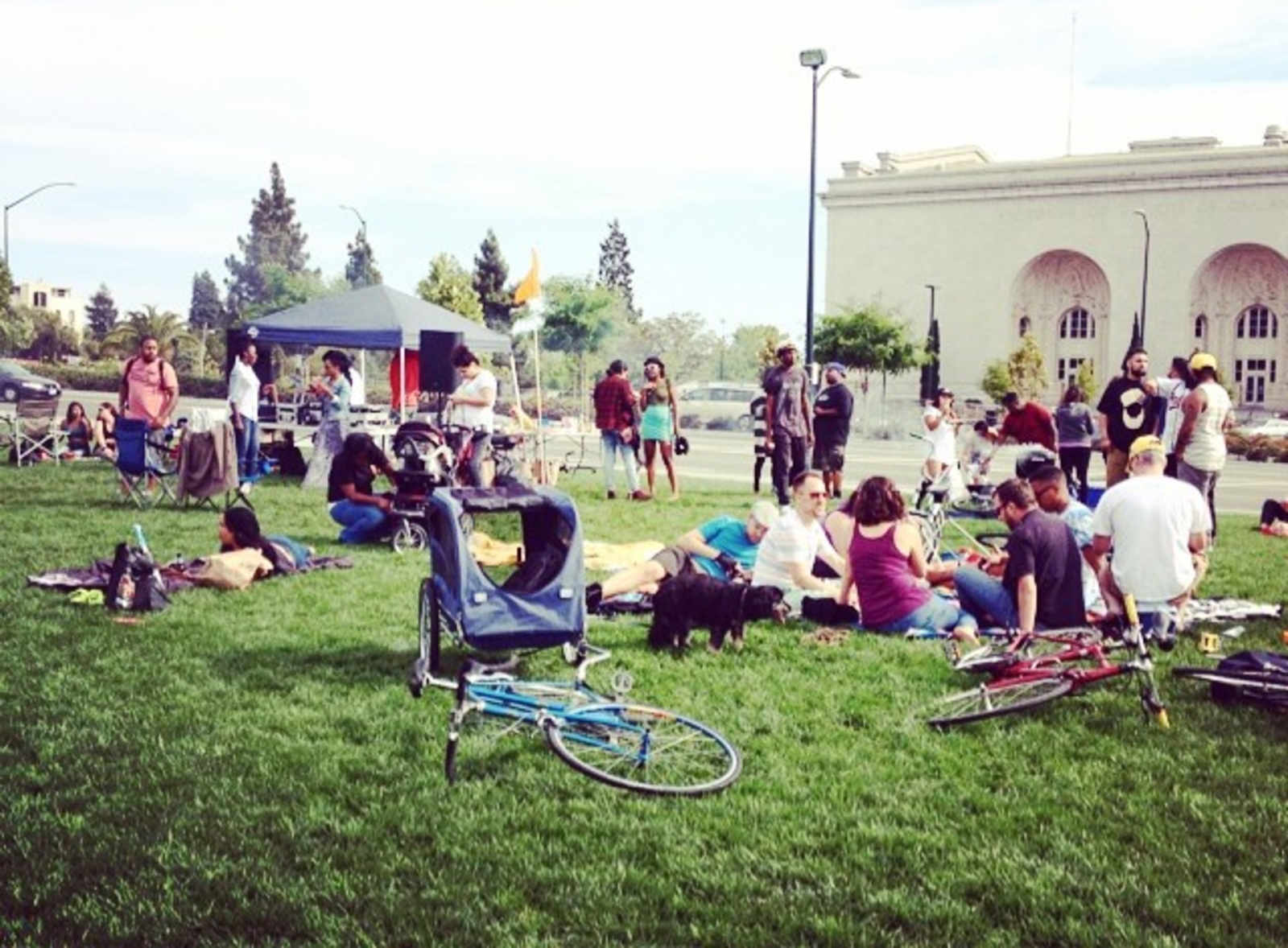 In fact, that last point is very nearly a lost cause. Oakland’s rents are rising fast, with tons of competition in hip neighborhoods—sound familiar? And just this week, early-rising Oakland residents were treated to a true, lasting image of the SF Tech Culture Imperialist Blitzkrieg: this dude and his goddamn pontoon bike (if we want to get technical, isn’t that really more of a catamaran bike?). Somehow I don’t think he would have gotten away with this 10 years ago. 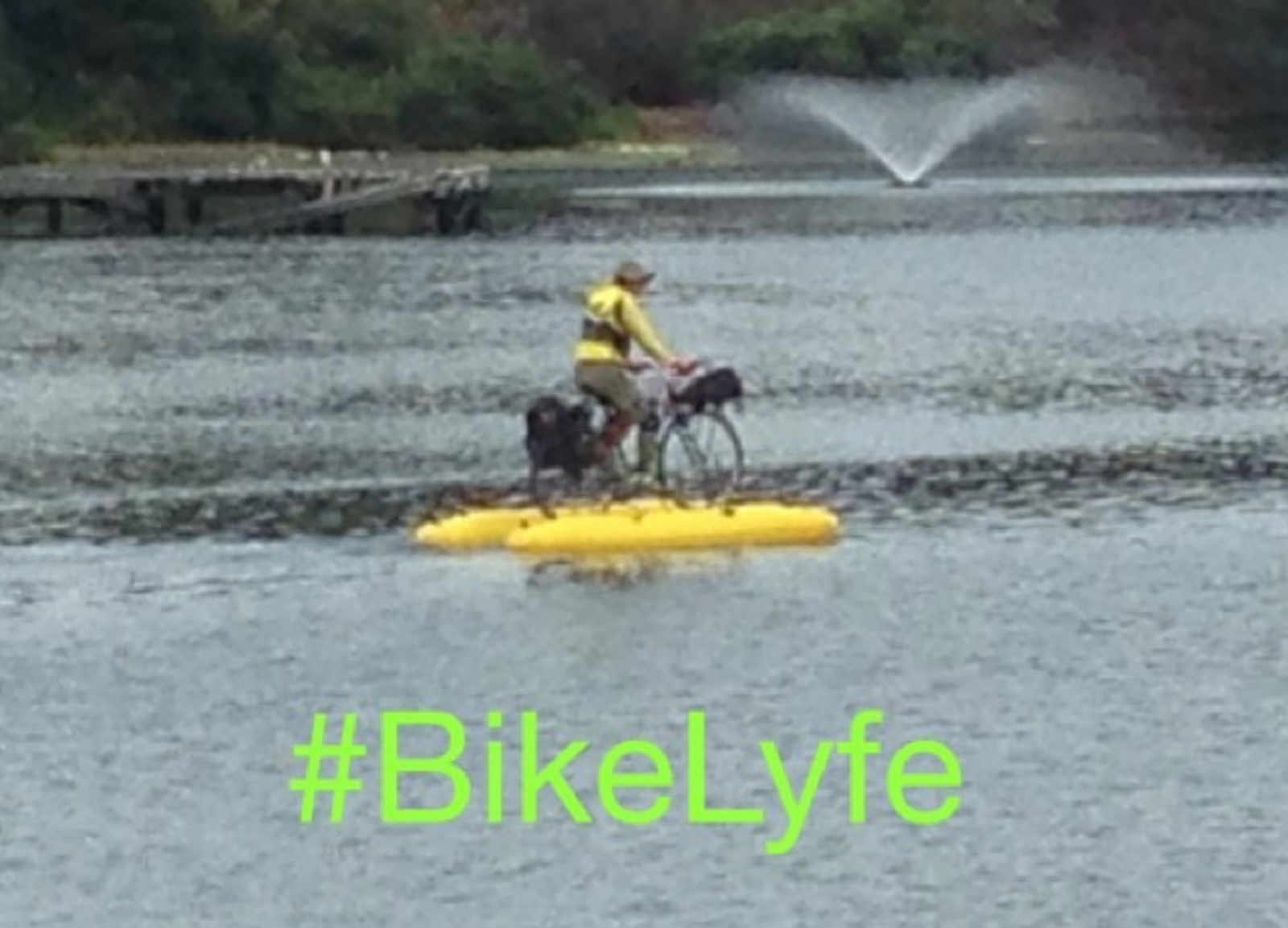 So with temperatures slated to be in the 80s this weekend, forgo your usual Dolores Park afternoon and familiarize yourself with Lake Merritt. After all, there’s a good chance we’ll all be living in Oakland in a few years. #bikelyfe

Dude, get over yourself.

Your reply doesn’t even make sense.

1. always wanted to say this to someone named jimmy: fuck you jimmy

2. ‘beer-filled muffin-top’ is descriptively immoral. nothing against m-tops but  filling them with a liquid rather than lipid is wrong, even in words.

3. glad to see the oakland riviera get a dash of press that (on balance) slightly edges out (?) the photogenic mudslide that is dolores park

read recently in the examiner that Dolores park may have to shut down public bathrooms because of drought-related cuts. Think I’d much rather visit bathroom-less Merritt than bathroom-less Dolores.

Another pro- that gorgeous garden!

Dolores Park and the party vibe was nominated to  be counted among the seven wonders of the current  world societal phenonoms. .  But, it is good to go out and explore other places like Lake Merrit, but please keep coming back to Dolores and representing your views there.

Thanks for blowing up the spot…dick.

Haven’t hipsters ruined SF already?  Please don’t ruin Oakland.  Stay in SF.  Oakland is scary and dangerous and eats hipsters for lunch.  Dolores Park is heavenly.  Be patient, my friends.  Dolores Park will be back - better than ever.  Patience is a virture.  Stay away from Oakland and Lake Merritt.  Oakland bad…San Francisco good.  Repeat.

Not wanting to be the new Mission is the new being the Mission.

Seriously?  Every time I’ve been out to Lake Merritt it seems like the grass is about ankle-deep in goose poop.  Has that changed?

I like to look at this post as the author’s way of cleaning the human duck-poop from the city and dumping it in Oakland on sunny weekends.

Bros in neon wayfarers; Trust me, Lake Merritt is where it’s at.  I hear there are secret The Oh Sees reunions there every weekend, along with dance parties, ping pong, and cheap micro-brews (fuck yeah) at Whole Foods (discounted if you say you’re bringing it to the lake).  What more do you need?

I also hear there are endless beer-pong and cornhole tournaments. They’re secret though. You might have to look under water for them. Don’t worry if you don’t see them at first. Just keep your head under the water looking for as long as it takes.

It takes too long to get to Lake Merritt.  This is more of a “where to go if you want to leave town on the weekend” then “where to go while Dolores Park is being renovated.”

Drinking in public is illegal everywhere, you idiots. Please keep your criminal behavior on your side of the bridge. Go do that shit in GG Park.

So all of those beers I bought and drank at Candlestick Park, [owned by the RPD,] were illegal because I was drinking in public in a park.    According to that,  we were both breaking the law –  the City, for selling the beer,  and me for drinking.

So, no you are wrong,  Drinking in the park isnt blanket illegal.  Its only illegal in some, in fact most of the parks.   What is illegal in Dolores is you can’t drink within so many feet of the children’s playground,  the street boundary, and you can not be drunk.

@Tom, that’s you weak ass opinion. We live in the USA, not is some Taliban controlled Theocracy. *Drinking is illegal everywhere in public*, where did you learn that, Saudi Arabia.? We tried prohibition, and it didn’t work out. Your fundamentalist religious moralities, are your, not Americas. Even Jesus created a miracle when he brewed up lots of wine quickly, and everybody drank it out in public.

yeah don’t turd on me, I mean tread

There are restrooms there, there’s free parking at the Kaiser Pavillion and even closer to Lake Merritt BART. There’s also a Lucky Supermarket even closer than Whole Foods. Next time do a little more research before you preach your pros and cons list.

Thanks for the read. Just so no one gets thrown off by your own lack of research, Whole Foods is a five-minute walk from from the grassy knoll under the Fairyland sign, whereas Lucky is a 25 minute walk southeast. Good tip on the parking lot situation for those averse to public transit.

Well, you suck for telling people about Lake Merritt.  And when you wrote about gentrification…did you ever think that publishing this would perpetuate it…yes you a-hole are perpetuating the fucked up economy of SF spreading to Oakland.  And targeting this hipster culture, who has also taken over parts of Oakland.  Thanks a bunch.

OH AND PICK UP YOUR TRASH BY THE LAKE>  last summer population by the lake exploded and this summer too.  No one picks up their damn trash.  It really suck when the lake is basically your backyard.

ugh.  enjoy the lake but respect it.  It is nature, not your personal trash bin.

Good call on the trash pick up. Generally I think folks are pretty good at keeping Lake Merrit nice, and I’m fairly certain a lot of the trash in the lake is due to it being the end of a 7-creek watershed. It would be nice to see that positive trend continue. Thanks for the read, it was all in good fun.

Get a room you two! This has Taming of the Shrewwritten all over it.

The mucking up, the trash dumping, and broification of Dolores Park = Bad

The mucking up, the trash dumping, and broification of Lake Merritt = Weekend Fun Away

Maybe this is an entire blog post of troll. But aren’t the commenters supposed to be the trolls? Maybe you’re disrupting blogs. Who knows. Fuck you either way.

I don’t get it… where in this post does the author tell people to dump trash along Lake Merritt?

The audience of this blog is notorious for dumping trash in the places where they are told to go.

funny- last article i read on this site that referenced Dolores Park was one where Kevin and Co were crying about the lack of garbage pails. As if the childish dbags that go there to get belligerently drunk are too lazy to carry out the empty versions of what they hauled in. The Mission = The Marina for people who dont get laid