Shotwell's, Bender's and Lucky 13 All Need Remodeling, According to Bar Rescue 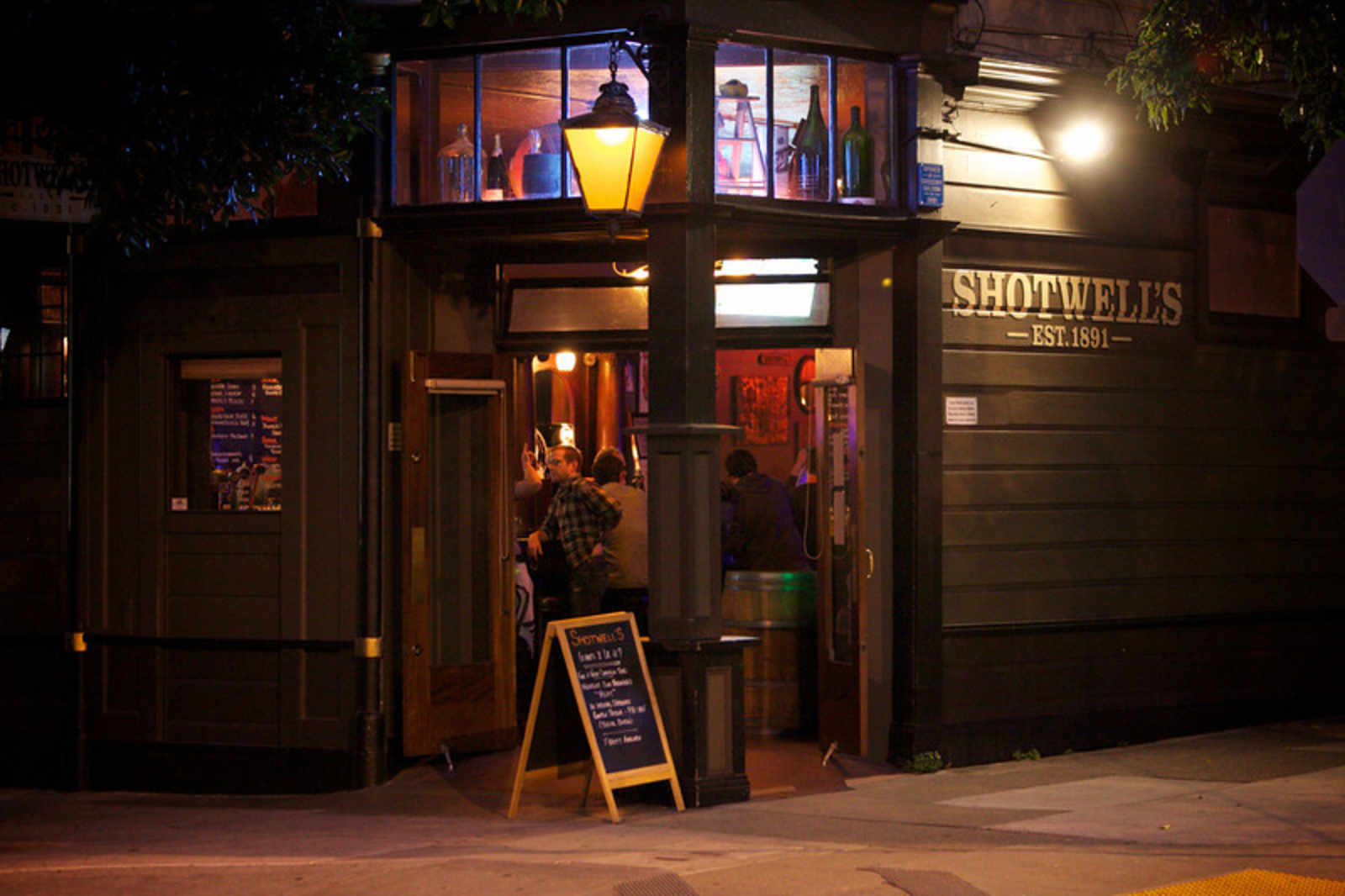 A few weeks back, noted Mission beer outpost Shotwell’s tweeted out that the folks behind Bar Rescue had been repeatedly calling the bar and breathing talking into their answering machine.  It seemed like a weird pick for a make-over show—Shotwell’s is a fine bar, regularly is packed with customers, and has the distinction of being one of the few in the Mission with usable bathroom.

However, since Shotwell’s tweet, we’ve since heard that the Bar Rescue crew has been on a tear, cluelessly hitting up multiple SF dives for an on-air renovation, including local stalwarts Doc’s Clock, Bender’s, Lucky 13, Emperor Norton’s Boozeland, Molotov’s, and Whiskey Thieves. [Update: And The Peaks, Uptown, 500 Club, and Mission Hill Saloon, too.] (We even heard Zeitgeist was on their list, but couldn’t get a confirmation.)

Tom from Shotwell’s fills us in on their experience:

I checked the bar’s old fashion answering machine the other week. Bar Rescue had left three messages, stating that Jon Taffer will be in town and he’s looking to make over a bar in San Francisco. I deleted the messages and started my usual pre-opening cleaning routine, scratching my head thinking they picked the wrong town. Then the bar phone rang, “Yes this is a producer from Bar Rescue on Spike. We noticed your Yelp reviews aren’t very good and was wondering if you’d like Jon Taffer to come in and redo your bar.” [Editor’s note: Shotwell’s current Yelp rating is 4.5 out of 5.]

I was immediately offended… thinking this bar doesn’t need a make over, or does it?  Just the thought that we were singled out for a Bar Rescue made me second guess myself.

But I quickly got my confidence back and politely rejected his offer. Then he asked, “can you recommend a bar in San Francisco that needs a rescue?” That made me laugh at the possibility of an amazing practical joke. God I wish I knew the guys over at Southern Pacific.  Wouldn’t that be funny? “Yeah Shotwell’s said you need a make over.” (Of course they don’t.)  I didn’t give the producer a name [of a bar], but I’m very curious who said yes to Spike.

Hopefully whoever said yes fares better than the Rocky Point Cantina, a bar that was forced closed after officials discovered all of Bar Rescue’s work was done without proper permits.

I love that Tom almost punk’d Southern Pacific, that’s more ironic – but less funny – than him dropping the name “Bix” as a place that’s sadly in need of a long-overdue makeover.

Tell them to call Bruno’s. That is the only place that I can think of that could use their help…

Good call. I like Bruno’s OK, but that place could be so much better than what it is.

Add Uptown, 500 and Mission Hill Saloon to that list. They should call my buddy Frank and offer to make over his bar, The 21 Club.

None of those bars appear to need any help garnering patrons.

The “Bar Rescue” crew appears to be targeting bars where they simply don’t feel comfortable. They should stick to mixologist/cocktologist spendy bars and simply stay away from places common folk go to enjoy a beer, a game of pool, and a more blue collar crowd.

I watch Bar Rescue regularly, and I can tell what they are looking for is reality TV situations.

I’m sure most bars have a few flubs and I bet the producers worsen the situation as much as they can.  But if there are some pretty people who can overact, the bar is in.

Lone Palm! That place is so 80s which some parts are charming but could def use a spruce up

Please don’t turn these bars into dens of conformity. Yeah, yeah, more windows and reclamated wood, higher prices, cocktails with dumb ingredients like quince and thyme. It gets boring.

Reclamated wood? Is that where they have folks regurgitate Clamato onto it before putting it up?

How about the Continental Club in Oakland?

From what I understand they have been calling just about all the bars in SF, and some in Oakland too.  I believe they are just fishing to do some shows in the bay area, and are reaching out to everyone. And for the record, they did call Southern Pacific.

Ugh. I don’t even want to think about what horrors they would perform on a little piece of perfection like Doc’s Clock or Bender’s.

I heard they called Diva’s as well.

I heard too, from one of the owners of Victory Hall & Parlor, that Zeitgeist had been approached, yesterday while I was having a drink and a burger at Lucky 13.

This person also said that their bar hadn’t been approached. Good for Victory Hall!

God known both of those shitholes could use some fixin’.

Oops, that was directed at the above comment, re: Double Dutch and Beauty Bar.

They called R Bar and Stock in Trade too.  I think they are cold calling everyone.

i wish they could put the nite cap back to what it was.  if these fucks weren’t sure to mixologize the place, i’d almost suggest ha-ra or geary club, just for the personality clashes (“let’s do this” “what? fuck that!”)

the pedantics! its too much!