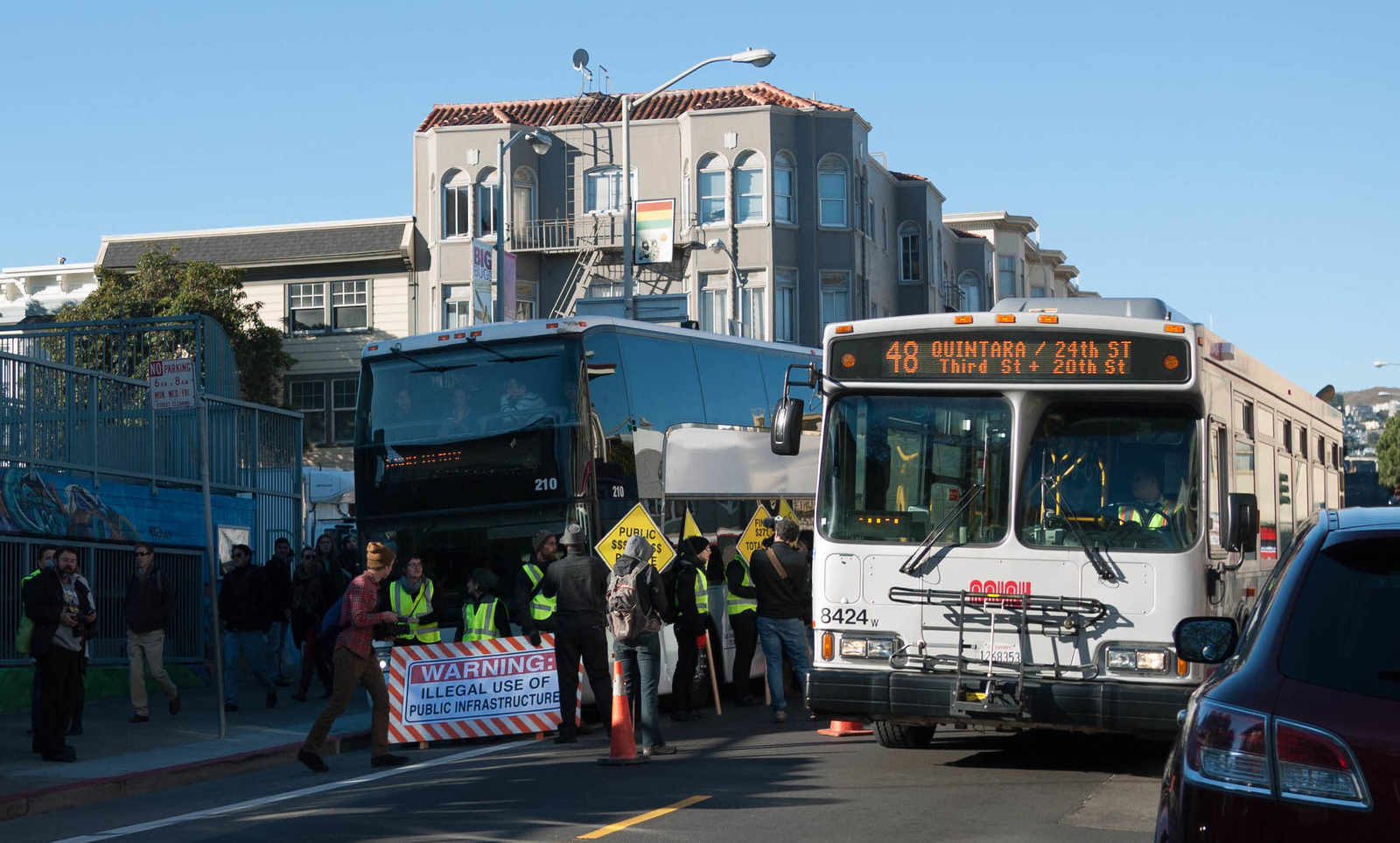 Alleging the continued violation of the California Vehicle Code and environmental review procedure, a lawsuit filed in San Francisco Superior Court is asking for an injunction to block the deal between the city and corporate shuttle operators that allows the exclusive, private carriers the use of public bus stops at the low, low price of one dollar a stop.  According to a press release:

The Coalition for Fair, Legal and Environmental Transit, SEIU Local 1021, tenant activist Sara Shortt and labor leader Alysabeth Alexander filed suit today in San Francisco Superior Court seeking that the City’s “Commuter Shuttle Pilot Program” be set aside. The suit alleges that the project is in violation of the California Vehicle Code which prohibits any but common carriers (public buses, school buses) to pull into red zones, designated as bus stops. The suit also alleges that City abused its discretion and violated the California Environmental Quality Act by exempting the Shuttle Project from envinronmental review. […]

Alysabeth Alexander is Vice President of Politics for SEIU Local 1021. “Time and time again, we have seen a double standard from Mayor Ed Lee. He has one set of rules for the tech industry and another set of rules for the rest of us. In the last 3 years, the City issued over 13,000 citations to vehicles in red zones, but only 45 were issued to the tech buses.”

In 2006, a similar tactic was successfully employed by motoring enthusiasts to block the city-wide bicycle plan a year after it was similarly passed by the Board of Supervisors without an Environmental Impact Report. The EIR was eventually completed in 2008, certified in 2009, and the injunction was lifted in 2010.  In other words, this issue of Google Buses isn’t going away anytime soon, no matter how much folks may want it.

Of course, the suit probably won’t slow down the shuttles, which have safely ignored existing laws for years with the city’s backroom approval.

The full text of the lawsuit, below:

Ugh.    Using a CEQA suit to get people off of private mass transit and force them into single occupancy cars is fucking obscene.  Reminds me of that guy who held up the striping of new bicycle lanes in SF for years with a CEQA suit.

If mass transit were the intent then they could give out free Caltrain tickets and  BART cards.

I thought the CA Vehicle Code argument was interesting, but when I looked it up, the CAVC doesn’t seem to explicitly define “common carrier.” The CA Public Utilities Code defines it as “every person and corporation providing transportation for compensation to or for the public or any portion thereof,” so I’d guess that the tech busses qualify (as employees would probably be considered a “portion” of the public for these purposes). This isn’t my area of legal practice, though, so I’d love to hear from someone who has familiarity with the CAVC.

Its laughable that the activists think tech shuttles are the reason people live in the city.  People live here because it is awesome and the towns in the south bay (Sunnyvale, Mtn View, etc) suck for young people.  Getting rid of tech shuttles won’t make highly paid young people leave the city, it will just make them use their cars.

I’ve lived here at least as long as some of the activists doing the shuttle blockades, and I take such a shuttle for my most recent job. I assure you that neither I, nor anyone else I know, would be moving to the South Bay if it disappeared. Aside from loathing the South Bay and having a network of friends here, my partner also works in downtown SF, and thus there would be no net gain for us in moving whatsoever. If I don’t take the shuttle, I drive.

“The town where I work is lame. I should therefore make San Francisco lame because that’s where I want to be to sleep for zip code #status. Hey, bro, you heard about that new sustainbable popsicle truck at 19th and Dolo? Sick, bro. Sick. Savory popsicles, bro. The chicks are okay; pics on Facebook are better. Haha. Fuck I’m funny when I’m chilling. Nah, bruv, I’m waiting for her to talk to me. Man, SF sucks when I’m not here. Thank fuck I’m saving it.”

You’ll get tired of the drive eventually, and then if you pop out a couple of baby googlets, off to Menlo you go.

People leaving the city when they have kids is not a new tech driven phenomenon.  It has nothing to do with tech shuttles and commutes and everything to do with shitty public schools.  Bankers, lawyers, doctors, anyone with money who doesn’t want to pay for private school have been bailing out to Palo Alto, Orinda, Marin, etc for decades.

Nope, not me. This is where I’m staying. Deal.

…until the job market shifts elsewhere.

your instincts are right. a common carrier is contrasted with a contract carrier, which is a carrier that transports goods for only a certain number of clients and that can refuse to transport goods for anyone else. At least thats what wikipedia says.

So if a tech shuttle offered to let non-employees take it to their company HQ for $20 - and what a popular and necessary service that would be! - would they magically become a common carrier?

Yeah, but they’d be subject to a shitload more regulations.  And the city/state/Feds could also claim that the employees are receiving a taxable benefit of $20 per shuttle ride…

I’m sure this will work just as well as the bike lane lawsuit, which is not at all. Those litigants got their names in the news and that’s what’s important. I don’t see how adding a couple thousand Audis to the streets of the Mission will improve anything.