However you feel about Airbnb and it’s role in the fast-growing, short-term boarding racket, the fact that they managed to piss off typical foes like San Francisco Apartment Association executive director Janan New and longtime affordable housing activist Calvin Welch so much that the two would be willing to share the microphone at a rally on the steps of City Hall deserves some recognition.

“The practice is detrimental to our rent controlled housing stock,” said New, which is frankly not something you ever expect to hear from the head of the local landlord lobby.  But here we are!

Welch and New have joined forces opposing efforts from Board of Supervisors’ President David Chiu, who recently introduced legislation to regulate short-term rentals, but not nearly enough for their liking. And with four supervisors or 9,700 signatures, any ragtag team of misfits in San Francisco can get a measure or initiative on the ballot for November.

As described to the Chronicle, their proposal would seek to limit rentals to commercial zones, require a fully public registry, and hosts would be required to have landlord or homeowner association approval while Airbnb and other middlemen would have to collect taxes, confirm insurance coverage and host registrations with the city. Private citizens would also be encouraged to snitch on violators in exchange for a 30 percent cut of any fines or uncollected tax bills, though that’s just a suggestion.

Naturally, if Chiu passes his legislation (with or without amendments) and an initiative succeeds at the ballot, or any detractor challenges whatever law gets made in court, it could all get even messier.  And then that mess would land on the desk of City Attorney Dennis Herrera.

Welch had the strongest words, calling Chiu’s bill a “backdoor rezoning of every residential neighborhood in San Francisco,” an “open, cynical appeal to greed” and “unamendable.”  He was introduced by former Board President Aaron Peskin, who demanded that that Airbnb “pay what they owe going backward.” Mike Casey from Unite Here Local 2, which represents hotel workers, lamented the loss of shifts and amateurization of the business while Rick Basinger of the AIDS Housing Alliance raised safety concerns voiced by elderly and disabled tenants and lamented the disproportionate share of displacement that affects the LGBT community.

New went on to remind everyone that “there’s a system in place,” cited legal bed and breakfast businesses throughout the city as evidence that this system worked and argued that enforcement of existing laws should be the legislative priority.  She also declared that “more units have been taken off the market for short-term rentals than in the history of the Ellis Act,” which would be incredibly significant if true.

(Efforts to get a copy of a draft initiative from Welch, which Peskin admitted even he hasn’t seen, were inconclusive).

In an allusion to the intimate relationship between Mayor Ed Lee and Airbnb investor Ron Conway, Peskin ominously added that there are “political forces in San Francisco, in Room 200, who don’t want that law enforced.”  It was all very dramatic! Meanwhile, because Chiu’s bill has to go to the Planning Commission for review first, it won’t even make it to the Board’s Land Use and Economic Development Committee for public comment and recommendation for two months or more, about the same timeframe as the July 7th deadline for getting something on the ballot. 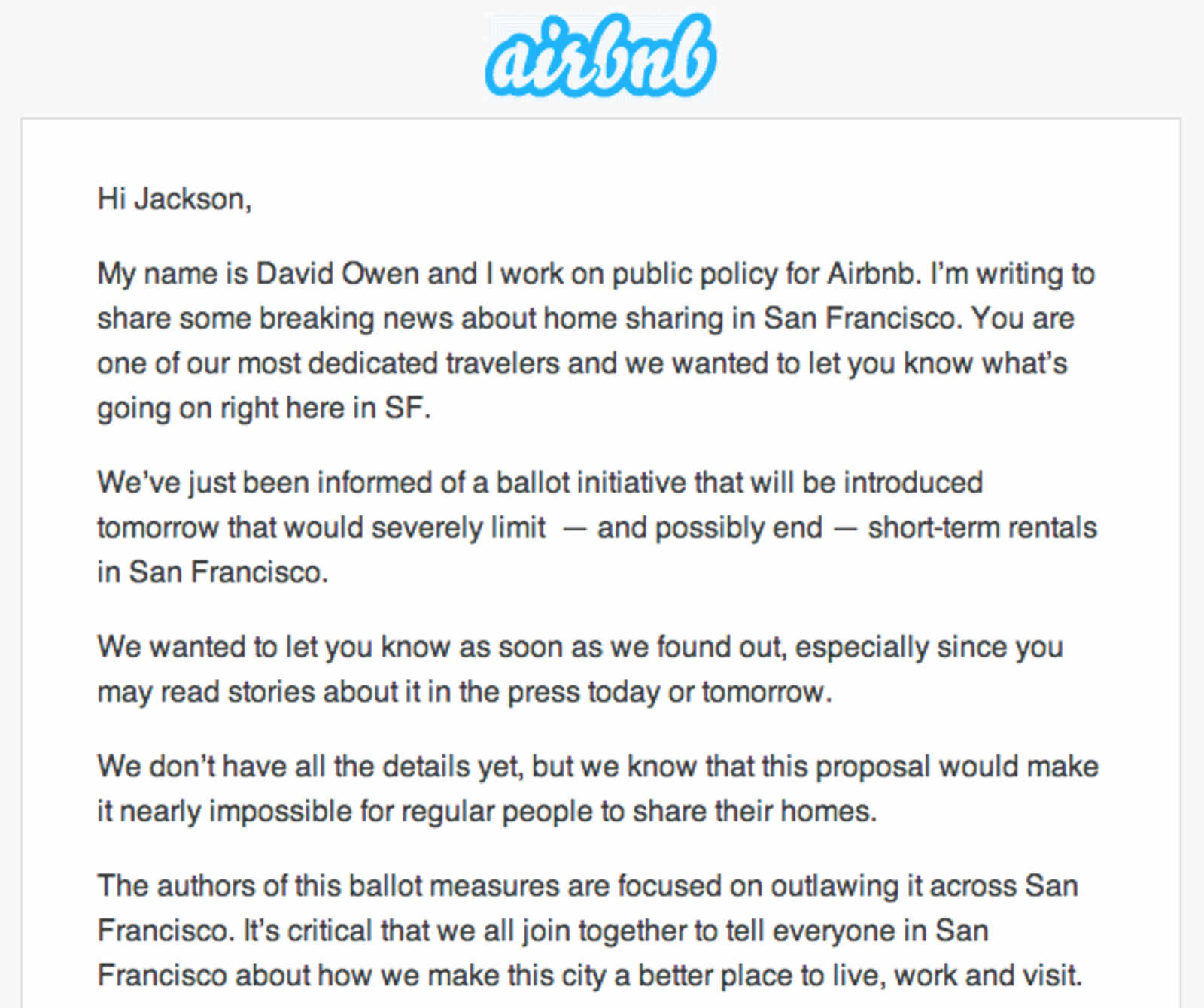 To what degree the coalition is serious and to what degree this is theater simply meant to stake out a negotiating position remains to be seen, however the group has reportedly raised $20,000 towards the signature campaign. Airbnb, naturally, isn’t happy.  They spammed the company’s “most dedicated travellers” (like your correspondent, who’s used the service once) to promote a counter-rally that afternoon. Chiu’s opponent in the campaign for California’s District 17 Assembly seat, fellow Supervisor David Campos, didn’t appear at either but has played up the 61 registered lobbying contacts between the company and Chiu’s office.  However, in a statement to the San Francisco Bay Guardian made before the rally, Chiu spokesperson Judson True wrote “We know that Airbnb has issues with the legislation. They didn’t write the legislation, period.”

If photographic evidence from the afternoon counter-rally is any indication, the audience skewed significantly younger.  Which suggests that divisions are along intersecting lines of age and class (not to mention the feelings of individuals about the merits of Chiu and Campos).  A poll has reported that 69 percent of San Franciscans surveyed support liberalizing the short-term rental market in the city, with clear majorities among voters across the party spectrum.  As does The Economist, which is not exactly known for its populist sentiment. Or appeal.

However, it’s still not clear the degree to which popular support is driven by desperation during a perfect storm of acute housing affordibility crisis and long-term wage stagnation.  In any case, Chiu’s bill suddenly looks positively moderate. And between Lee and Conway on the one side and Welch and New on the other, the Overton Window might stay open long enough for it to sneak through.

You’re kidding yourself if you think the interests of established property owners and established tenants aren’t aligned all the time. Like when blocking new development, for example (one wants to keep their existing property next door valuable, the other hates techies and new buildings - perfect!)

Chiu’s bill is the reasonable approach, of course, minimizing the opportunity for abuse while legitimizing a service that a lot of people generally like to have around. I predict it will fail.