It's An Asshole's World 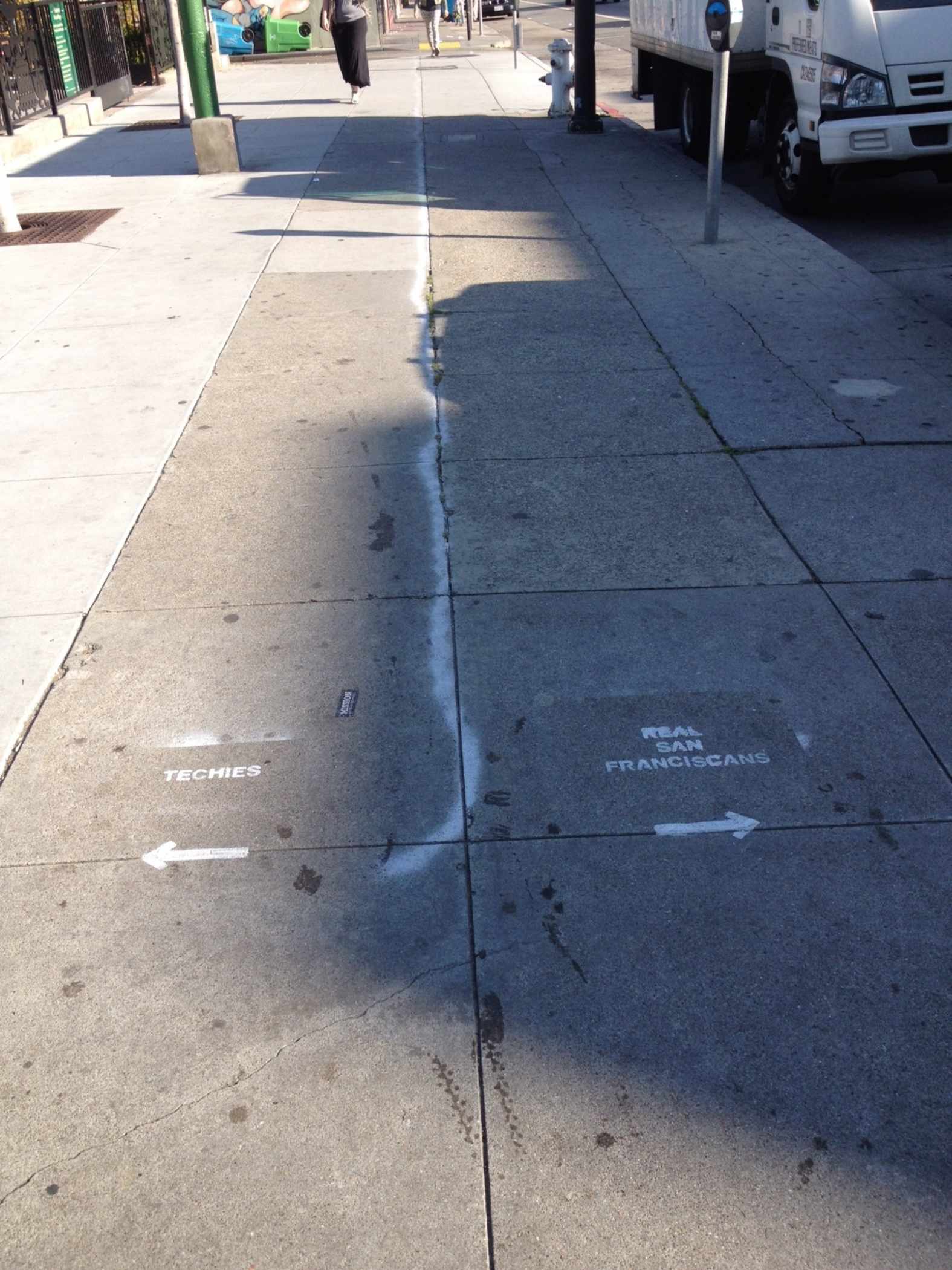 San Francisco’s premier boulevard of bullshit became stunningly more annoying this weekend as an individual attempted to segregate Valencia Street’s sidewalk with a “techie” side (a playground and Borderlands Books) and a “Real San Franciscans” side (the street where the caravan of Silicon Shuttles roll past).

Of course, the idea isn’t inherently terrible.  Much like how the Golden Gate Bridge segregates their sidewalk between cyclists and child predators for the benefit of idiot tourists, Valencia really could use a baby stroller lane to keep all those double-wide monsters in line.  Opportunity: missed.  Now I’ll keep losing those valuable seconds stuck behind twittering child chauffeurs on my way to Four Barrel’s thousand hour line.

Anyway, this “techie”/”real” distinction falls apart further when considering this scene from the other day:

The Mission: where you double park your Ferrari so you can grab a $7 juice from a Michelin star restaurant pic.twitter.com/ja4K6JGvRa

Range is safely in the “techie” side, but the Ferrari is double parked in the “Real San Franciscans” bike lane.  Does this mean the person is a hybrid?  Does he fall into a confusing void that we all pretend doesn’t exist?  Is he just a special lil’ asshole?  And why isn’t he driving a Telsa, anyway?

I’m analyzing this too much.  I’ll be walking on whatever side doesn’t have strollers.

Bravo to the street artist. But let’s be clear as to what makes a “real” San Franciscan. There are lots of San Franciscans who moved here in the 90’s or later that don’t work in tech and yet consder them selves real San Franciscans.  Let me be clear:  You are not ‘real’ and you are just as much an interloper as any google-bus riding techie.

So a “real” San Franciscan is defined solely by how long they’ve been here, in your opinion? No matter what?

That time frame conveniently being one year after you personally moved here, naturally.

Ha, written by a true San Francisco newbie. The peninsula is calling, my friend!

I’m sure someone has made a joke as to what color this guy was before ‘89  right?

I’ve never understood SF nativism. Over a third of city residents (me included) are foreign born. That’s part of what makes this town so wonderful!

I’m peeved at some in the start-up crowd as much as anyone though: There are good people in the tech world but conspicious consumption, lack of empathy & engagement are getting a little heavy.

So, what are they?

If somebody moved from to San Francsico in 2010, they’re no longer from their place of origin, but can’t be San Francsican either.

So does that make them homeless?  Stateless?

I wanted to move here in 1989, but was only 10 years old and my parents wouldn’t allow it.

The great majority of Americans lack the vocabulary to discuss any social issue in any other than economic terms. “Real” San Francisco was unique among American cities as a home to a strong minority of people possessed of a certain cool detachment toward financial wealth.

Yes there have always been wealthy San Franciscans. But the ones The City remembers and calls its own were and are those who understood that money was the adjunct to a successful life, not the centerpiece of it. A perfect illustration of this is Larry Ellison: Ellison may be very wealthy, but only a fool will ever mistake him for a “real” San Franciscan.

If the current tech boom merely put too much money in the hands of some self-important nouveau urbanites, old-time San Franciscans would simply roll their eyes and laugh. The problem is that mediocrities with money are too willing to overpay for a notionally urban lifestyle. In so doing, they’re displacing those who see San Francisco’s cultural inheritance as something far to valuable to be bought as if it were merely another of San Francisco’s burgeoning “artisan” mediocrities.

“A perfect illustration of this is Larry Ellison: Ellison may be very wealthy, but only a fool will ever mistake him for a “real” San Franciscan.”

Is that because he is wealthy or because he lives primarily in Woodside?

I would argue that the Getty’s, the De Young’s, and the Bechtel’s are all “real San Franciscans” despite their incredibly wealth and how it is pretty central to their lives.  However, I differentiate them from the Ellison types because of how they invested their money in the city’s culture.

Which is worse finding someone parking their F-car in the bike line on your commute or finding person pooping in your pathway out of your apartment!?

To add insult to injury is that an open parking space right behind the Chrysler?

OOH YEAH BROTHER!!! WHAT IS REAL ANYTHING??? WE’RE ALL A PROJECTION, BROTHER - OF THE HOLOGRAPHIC UNIVERSE OOH YEAHHHHH

Made my day! Thank Hulk!

No doubt this was stenciled by someone who has lived here for less than 10 years.

I would of preferred puke instead of pain… *sigh*

WHOOOOOOOOSH, Kevin. I’m pretty sure the arrow towards the CURB indicates where San Franciscans are getting tossed.

I’ve lived in the city for 14 years. I’m raising my children here and sending them to our public schools. I work in technology.  So does my wife.  Am I a Techie?

Oh, thank goodness. Your approval matters greatly to me.

“You still have to walk on the left.”

Ferrarri double-parked in the bike-lane is seriously begging for a krypto through the windshield.

I’ve been coming to San Francisco for over two decades (every other weekend it seems) I finally moved here December 2013.  What does that make me?

Ah, I get it. So all the hispanic families who use the Mission Playground are techies. I suspected as much. Damned interlopers!

If you are Latino and moved here (legally or otherwise) you get a pass. But if you were born in this country (but not SF) and are whitey, GTFO.

the artist who created the this was using it as a commentary on the stupidity of those separating people into artificial groups such as “techies” and “real san franciscans” by making an visual analogy with the “jim crow” signs of the former segregated south.

i know the ferrari owner while he shouldn’t be parked in the bike path, he is droppng his kids at the soccer field at mission pk, not getting a juice.  his family has been in s.f.’s north beach since the 1870s. so if there was a such thing as a “real san franciscan” he is waaaay closer than most. 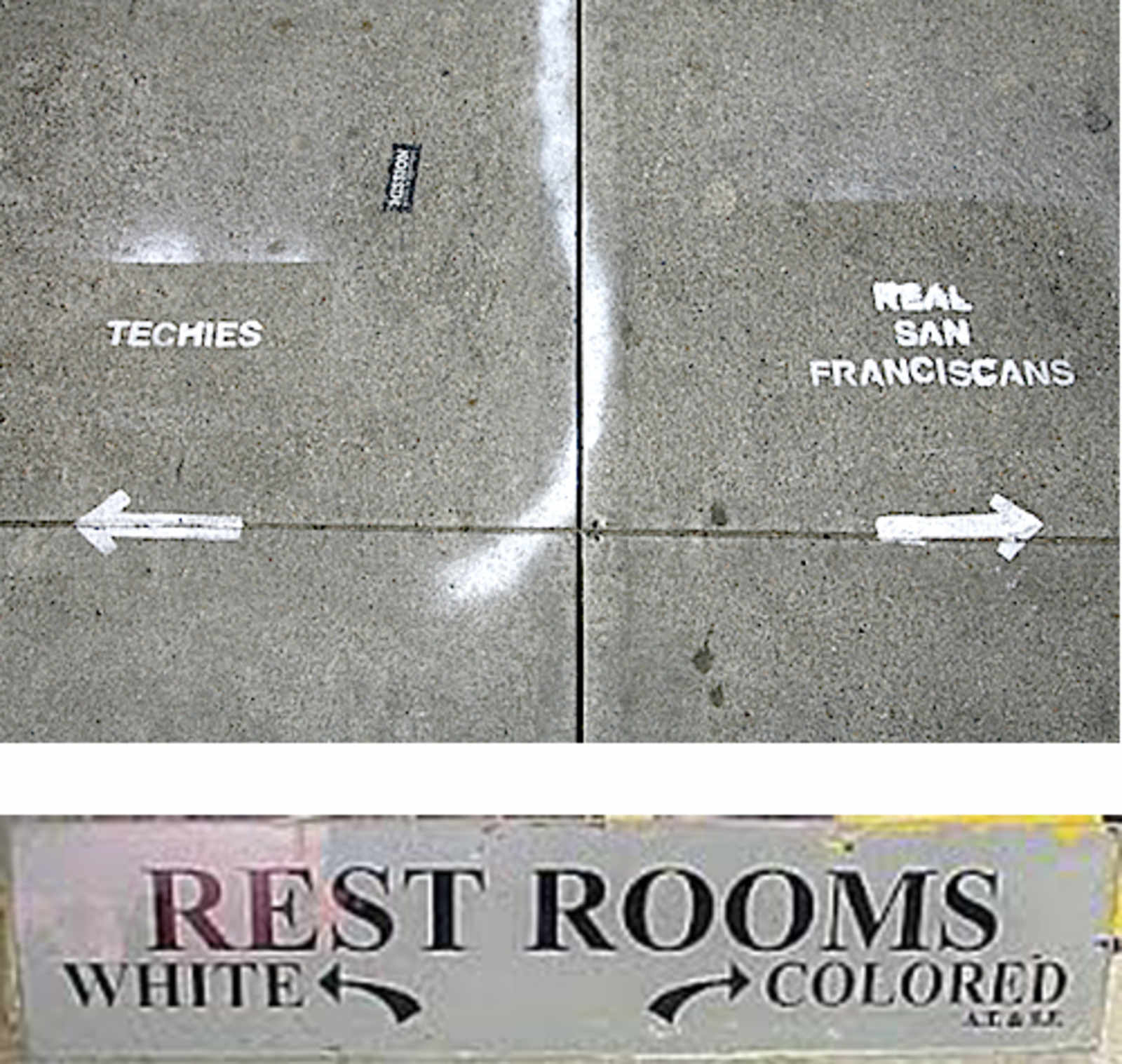 No, he was not dropping his kid, as you can clearly see in the photo.

This is a dumb article. that’s not what it’s saying. It’s not segregating you people from real San Franciscans, ugh god white people read between the lines. It’s saying that Valencia and beyond has been ultra gentrified and is home to techies and the arrow pointing “real San Franciscans” is indicating the area that has not been quite as gentriefied or kicked out hardworking native Latino families so you Silicon Valley robots could have somewhere to drive your dumb buses and house your overrated  lifestyles

Honestly Kevin, I think you just got trolled by a high school graffiti artist and you’re taking this line hard to the heart.

It doesn’t matter when you moved here to be a San Franciscan, i.m.o. it’s all about your approach to everybody else who lives here in SF. A big part of the culture was built during the Summer of Love, so naturally it still holds to just chill, be friendly and don’t be a dick to your neighbors.

That said, I think the Ferrari is exactly what the “Real San Franciscans” keep picketing about: asshole “tech” yuppies who think San Francisco is their place to shit on just because that one place makes killer $10 cold-pressed juice. And it’s organic!