Tip Jar at Valencia Eatery Asks Question for the Ages 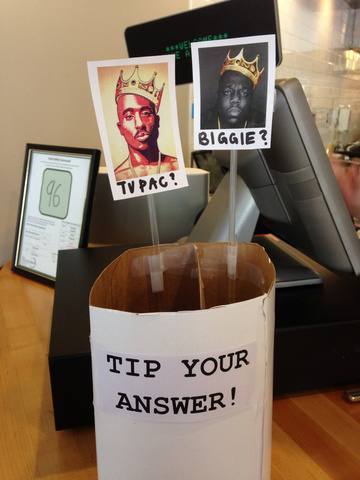 The Valencia location of Curry Up Now is requiring customers to answer one of history’s greatest questions when tipping: Biggie or Tupac?

When answering such a question, one must begin by determining what criteria is being evaluated.  As both men were hip-hop artists, it would at first appear to be a meritorious evaluation of their output.  But perhaps a greater rivalry is at play here, as suggested by the relative placement of the two tip bins; Tupac is to the left of Mr. Smalls, which is indicative of their representation of West Coast vs. East Coast  hip-hop, respectively.

As a customer I was not inclined to take a stand in this battle as I appreciate both artist’s work equally.  Working in my favor is the particular nature of the tip jar vs. the conceptual nature of duality; as duality in an of itself cannot be manifested in physical form, thus a binary answer cannot be enforced.

So I ripped my dollar in two and put half in each.

Only someone that doesnt really know rap puts Tupac in this conversation. First of all, he was fake hard. Marin City? Whats that, two blocks at the foot of Mt Tam of some bad ass shit? The Fame drama school he went to? Dont tell me he dance-fought with Leroy. Go on youtube and watch that video of Biggie rapping about bitches on a street corner when hes like 14 with the neighborhood around. Thats the sht. Not some fabricated bandana wearing, Tommy Lee tattoo-having dude ..

Ok, so all of this is based on music. No way is Tupac close. Sorry. Tupac has crossover appeal for emo douches. Biggie Smalls is the illest. Tupacs style is played out like Arnold and that whatchoo talkin about Willis….

You are missing out

More importantly- how is the food at this place?

Their “fusion” menu is a little too 90’s for me, but their thali plate isn’t bad. Besides, you can’t eat at Pakwan every day.

This blog could use a tip jar.