The San Francisco Citizen's Initiative for Technology & Innovation, or sf.citi, released their first viral video earlier today, which aims to explain what Twitter/Zynga/Salesforce/AT&T/Airbnb/Ed Lee/Ron Conway-backed organization will accomplish.  Let's give it a watch:

0:05 - “…but people get parking tickets and bikers look like assholes in my rear-view mirror.”

0:10 - Disenchanted high school vice principle reveals himself: “It'd be awesome if we used technology to cure aggro cyclists.  Let's give it a shot.”

0:40 - Dude named Biz makes a bold suggestion: “How about we glue a giant iPhone to the side of every Muni shelter that tells you where every cab, train, bus, boat, plane, homeless person on PCP, human slingshot, poorly locked bicycle, and dressage pony in the city is and maybe helps you get a ride that probably isn't there?”

1:08 - Victim with MacBook Pro is unable to afford $40 for a basic DSL service, has to check email from place where weird smelly people shoot heroin.  How can this be?

1:20 - Person speaking in tongues wants to know what the city can do about hipsters and foodies and gentrification and rising rents. 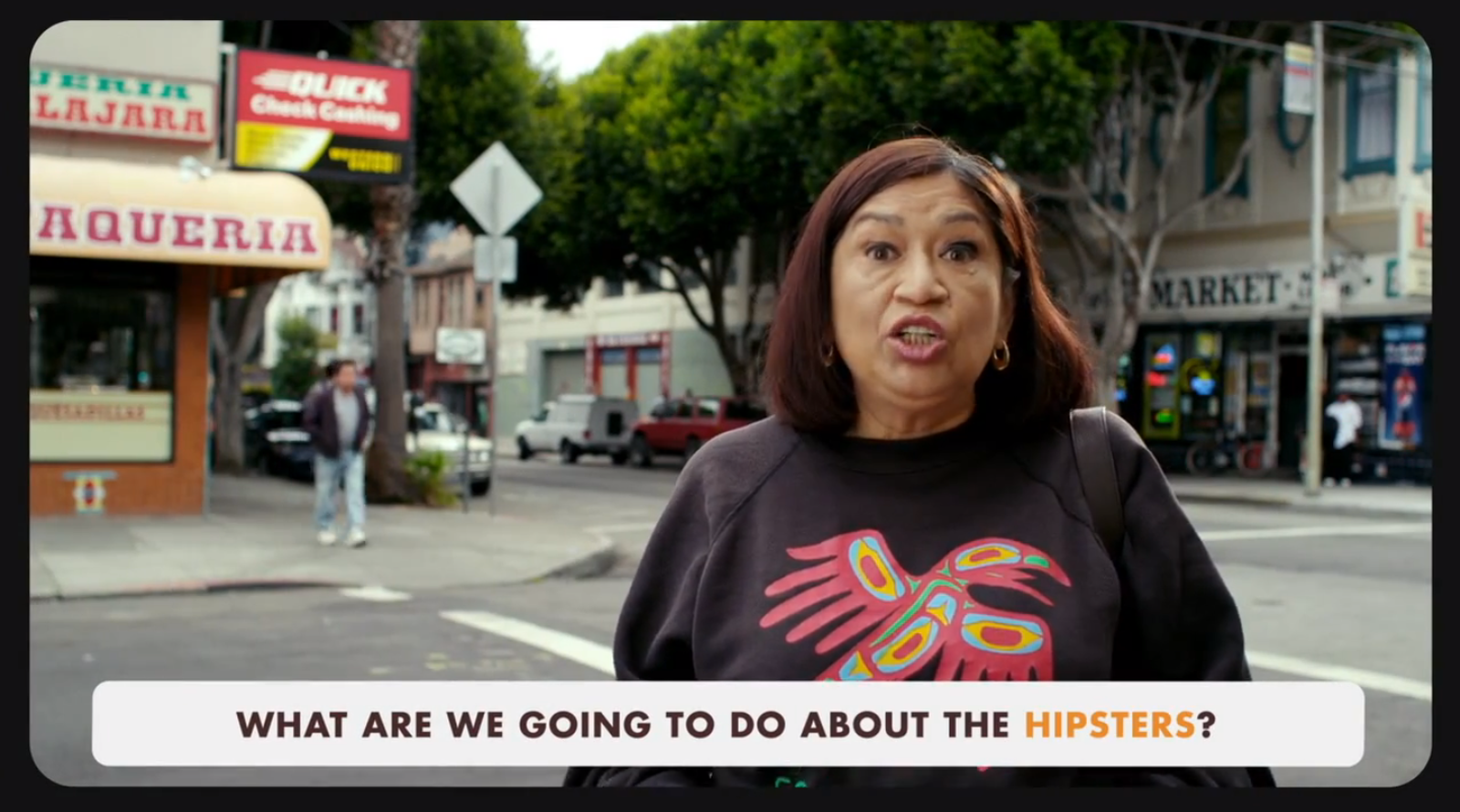 2:00 - The Yeti is back and now he wants to get in his teen sister's pants.  Unfortunately, she lives in the Sunset and—gosh darn it—there isn't a cab around, so they're off to find a dumpster to plow behind.

2:02 - Wait, this is an advertisement supporting Prop E?  The proposition that would change the city's tax policy?  It's an advertisement for Prop E even though the video's funder, Silicon Valley Mob Boss Ron Conway, said it wasn't a campaign ad?  How exactly does changing our tax code get us public wifi and the Yeti in his sister's pants in the privacy of his own mancave?

2:10 - Good thing they didn't promote that internal SFPD report filing app they created but the department can't use because they cannot afford the cell phone plans…

Now, this isn't all to say that Prop E is bad (it isn't, and it's supported by pretty much every politician, NGO, and newspaper in town), nor that free public wifi would be bad for SF (it would plug up all those cellphone dead zones, reduce utility bills for businesses and residents, provide ever-necessary connectivity to low-income students and families).  However, this ad does more than exaggerate Prop E's benefits or make small fibs—it is straight up deceitful in claiming voting in favor of Prop E will do anything to improve ordinary San Franciscan's problems.  Prop E won't give you wifi or fix Muni; all it will do is improve the San Francisco business tax code, largely for the benefit of tech start-ups.

Also, why pick on vegans, cyclists, and Latino's with genuine problems?

These are horrible ideas. The parking app is the worst. The whole point of parking meters is so people don’t park in one spot all fucking day. amiright?

I’m aggro, but the guy who pulled across both lanes in front of me (and then claimed I was invisible) on 9th Avenue is the victim? What a shitty video.

The muni thing is pretty cool though, have to admit

So that business owner in Potrero Hill wants to report graffiti so he can more quickly get a notice that he has to repaint it on his dime or face a huge fine from the city? Very useful.

Well played, KevMo. It’s a beautifully made video, too bad they don’t seem to have any new ideas. But yeah, Prop E is good–probably the first time this Pissed Off Voter has agreed with Ron Conway. Tech companies will benefit, but so will restaurants and retail and any other businesses that spend most of their money on salaries.

But there IS (a small) something we can do this election about hipsters. Prop C will create an affordable housing fund that will help at least a few non-tech millionaires afford to stay in the City.

Jeremy, was curious about the Pissed Off position on this. Yes, I understand it will help out small businesses and bring in more tax dollars from Wells Fargo and the like, but did you guys consider the Tech Boom that we’re experiencing? Surely Prop E will exacerbate this. Did the benefits outweigh the drawbacks for you guys or was the benefit to the Tech Boom a non-factor?

I was going to vote “yes” on Prop E, but now I kind of want to send a box of bedbug infected blankets to the Twitter office.

Is there an app the will turn my smartphone into a pocket pussy?

Ha.. All of these guys have invented lame ass shit but hit the bubble just right. Thats why this idea wank off sucks

This ad is nothing but a bunch of HYPE! It’s propaganda to support the Twitter Tax Break.

There’s been an app for parking payment in use for at least the past two years. (See those stickers on parking meters with info.)

There are at least half a dozen apps that have been in use for reporting dumping and graffiti.

The rise in the cost of living (as a direct effect of the technology boom) and the proliferation of gang violence is of far greater concern to this latina. I’ll take hipsters over techies anyday.

I was going to vote for E until I saw this video.

track everything snitch on everyone

I don’t watch the video because I would rather be left with your hilarious play-by-play. Thank you.

Do you have to be that dull to live in a place like 830 CDM?