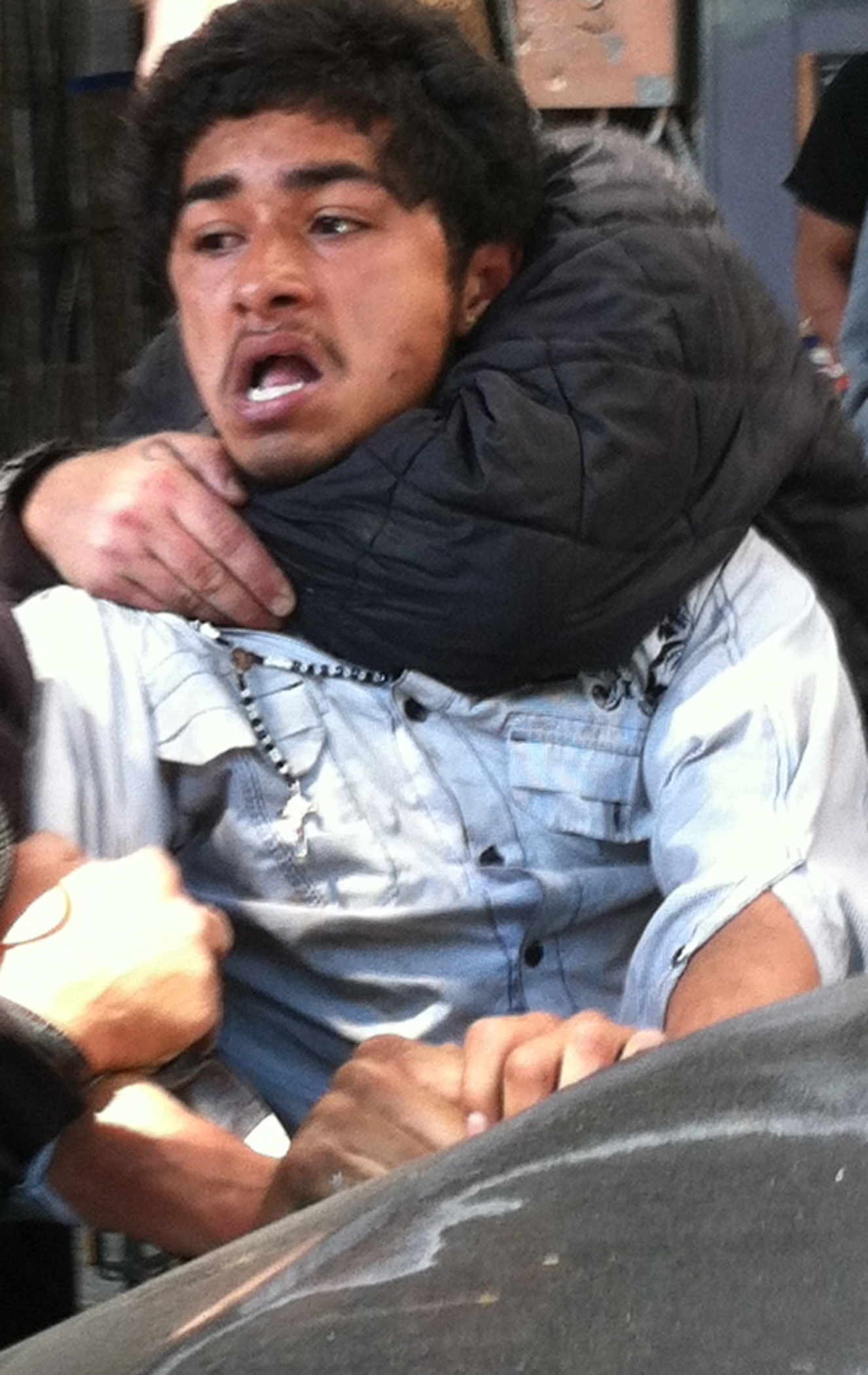 UA tipster Mike was on the scene at Haus on 24th earlier today when a laptop theft victim caught the thief and reclaimed what was rightfully hers:

Check out the attached photo to see what expression a low level Mission thug makes while he's being held down by regular neighborhood folks on the sidewalk after stealing a laptop from Haus Coffee.  This chump made it about 5 feet before being tripped by the victim then pinned up against the car in the photo while everyone else on the sidewalk called the cops.  He was arrested a few minutes later and the DA will likely be looking at charges.  This all happened about 2:10 pm today.

We should note that there has been an uptick in these thefts lately, with (according to the Valencia Merchant's Association) criminals looting employee's personal belongings (and cash and merch) at Harrington's, Public Bikes, the gallery at 973 Valencia, BelJar, Serendipity, and Dema over the past few weeks.  Not necessarily related, but be sure to keep your head up.

Scum bag is wearing a crucifix so it’s OK, he really needed the money. We should let the good catholic go. It’s the Christian thing to do.

I like how it is implied that this guy is not regular neighborhood folks.

Battle but not the war

Locks are cheap. They will slow someone down long enough to make a snatch and run impossible. And, if you have to go to the bathroom, or outside to smoke, TAKE YOUR LAPTOP! Don’t count on catching them.

Low hanging fruit isn’t always so easy to get at, eh?

if you can’t safely tie your mutt to a pole out front, what makes you think you can walk away from your exspensive electronics? people, stop baiting the underprivileged with your neglected possessions, please.

Another one got swooped from Haus last week while I was there, right from the window seat. That spot is preyed on by thieves for sure. The guy last week wasn’t so lucky :(

I wish they’d done a good old fashioned “beat the shit out of him’ moment, vigilante style. Until we start beating these thugs down HARD, and stop giving them hugs and free passes from the DA, they won’t learn. Bust his jaw, smash his fingers and then let’s see how that plays with this ugly POS next time he gets the urge to steal. Better yet, a baseball bat to the chest and the knees.

Thank you people of SF! I just moved from Manhattan (Alphabet City) a month ago. While I don’t think a thief (even in Alphabet city, for those of you who know Manhattan) would be so bold to run into a crowded coffee shop on a popular street in broad daylight to steal a laptop in plain view, I also don’t think so many people would have come to my aid so quickly.

I stepped outside to make a phone call, luckily putting me in a position to see the thief dart in and out of the store and allow me to (totally instinctively) scream and leap onto him long enough to stun him and make him stumble for just a second (I’m a 115 lb female) - at which point not one, two, but THREE men from the street immediately helped me by grabbing him and pinning him against a car. And multiple others called the police, as I was in too much shock to do much of anything but stand there and clutch my computer after it fell to the sidewalk.

Though I still have my laptop and it was a non-violent crime, I’m pretty jumpy and paranoid even 4 days later. Which sucks. And I’ve NEVER felt unsafe in a city before. So I hope that guy is taught a lesson and doesn’t try something like this on anyone else!

Thanks, Kyle! And you too, 4th grade kids.

Maybe I’ll see you at Sugarlump. Just look for the girl with the laptop chained to her leg.

this douche needs to get raped in jail

Oh please? An old fashion beat down? You sissy ass nerds have no idea what a beat down is. Not one of you would fight that guy one on one. 24th street posers. I am so sad, not by the fact that poor ass broke dudes are stealing the elite prissy ass princess’ laptops, but that this town is actually full of idiots that would suggest the guy should “get raped in jail”, or get “an old fashioned beat down”. Obviously you and your coffee house poser buddies think this is some disneyland ride that you are safe on. Guess what you morons… the Mission is filled with folks who are living 6 to an apartment and struggling to come up with the amount of money you pay for one coffee so they can feed there families for a day. Those same folks walk by you and your laptops and pocket books filled with cash and get a slow burn of anger rolling. Who do you think they will take it out on? That is right… you hipster posers. You will be walking home from your disgusting little hipster bar at 2am and they will come to you. First they will ask for your money, you (being as stupid as you are) will think it is all part of the Disneyland ride… Until BOOM… you fall to the pavement. You fuck faces are part of a gentrification. Yeah it is a good ol’ fashion beat down… beat down the down and out… then take their apartment. Bite my Crank.

Dude…there’s only 1 dude who says “crank” like that in SF! I know who your are!!! HAHAHAHAHAHA!