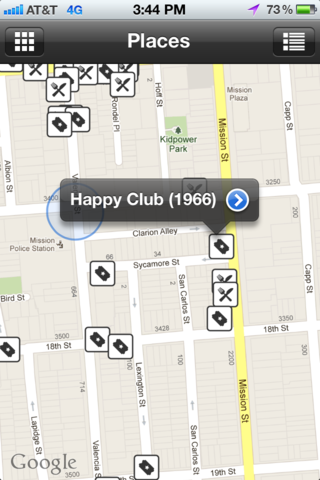 Bored of the same bars and restaurants that you've been checking into ever since Steve Jobs empowered you to more efficiently ignore your surroundings?  Want to be able to knowledgeably reminiscence about how much cooler the Mission was back when The Sycamore was still Happy Club and Jello Biafra hadn't gentrified the hood yet?  Well, now you can.

Meet PastMapper, a new, very much beta location-based check-in app that allows you to share where you'd be eating and drinking if this was 1966.

While the concept might sound silly, it's actually a fun app to play with, if only to learn how much more silly bar names were before RFK was shot.  For example, 24th was lined with bars such as Bucket O'Suds, Green Lantern Tavern, Pop's Clubhouse, Chip's and Big Ed's, Valencia was home to a joint called “Cozy Tavern,” 22nd and Mission had a bar “Mission Carousel”, and the corner of 21st and South Van Ness was “Bubble Club.”  Plus, there was apparently a restaurant on top of the US Bank Building (“Towers Restaurant”), The Napper Tandy used to sell donuts and The Jelly Donut used to serve booze, and seemingly every corner of the neighborhood had a bar on it.

As previously mentioned, the app is a little rough around the edges—you cannot browse the history outside your GPS range (for example, I'd have to walk to Bender's to find out what Bender's used to be), and data is currently limited to 1966.  However, Brad Thompson, the app's developer, tells us he's “got data being made ready right now for 1976, 1953, and 1914.” All that data will be made available when it's ready, and he'll be expanding the database to the East Bay soon.

This provides a lesson in the limits of the internet. Dear god, how badly I want to see pictures of the interior of Towers Restaurant. Alas, there are none to be found (at least, based on my search parameters). I’ve been in that room when Typekit was there recently, but I suspect there was a glamour to Towers (let alone layout) that was quite different.