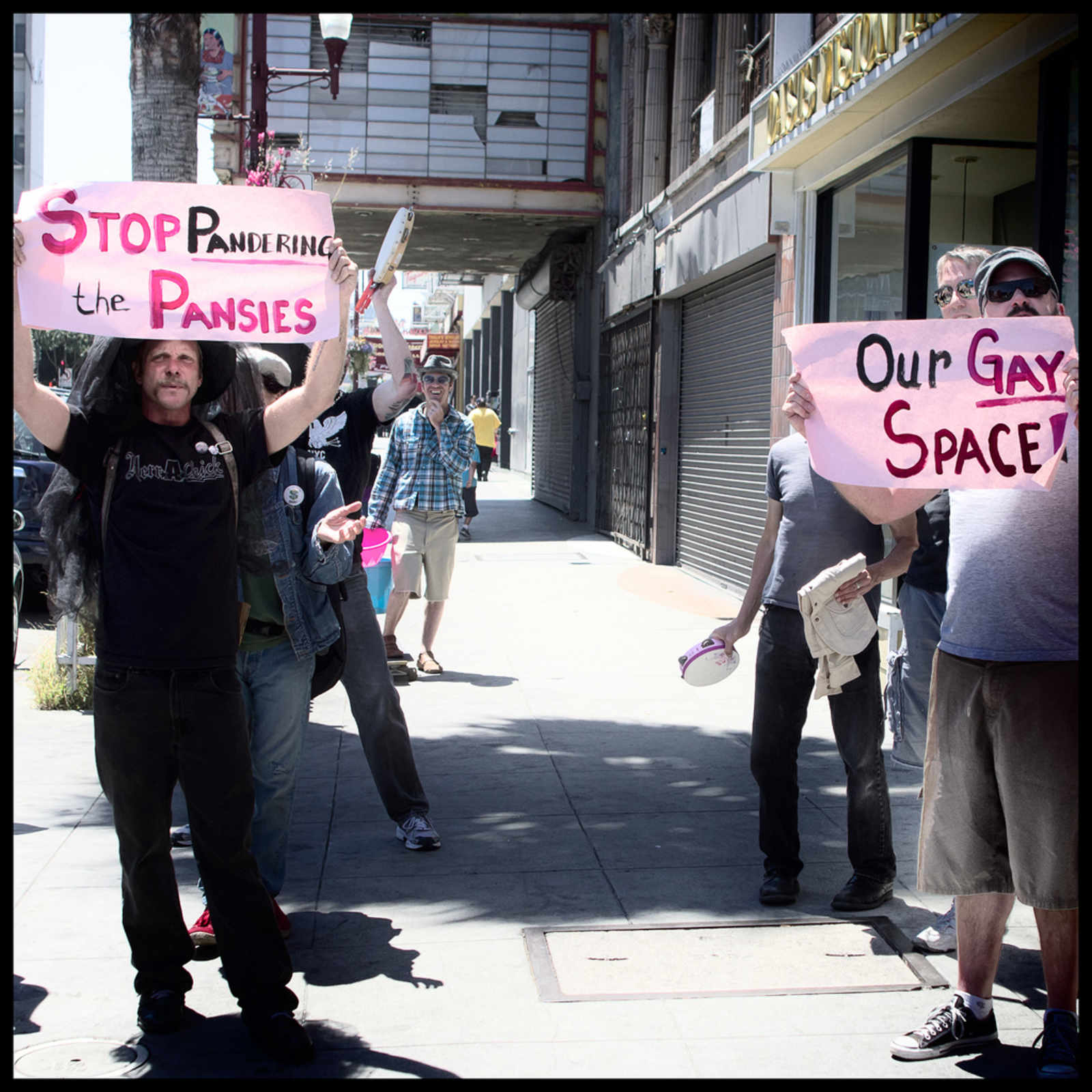 As you might have heard, the eviction of The Eagle Tavern has been quite the controversy to both the LGBT community and lovers of good bars in general.  To some, the closure was yet another tragedy in the assault on gay culture in the ever-gentrifying SoMa neighborhood; to others, another casualty in the erosion of San Francisco's character.

But plans by area queer businesspersons to pay the $15,000/month rent and re-open the Eagle offered up an encouraging glimmer of hope—until an owner of Foreign Cinema came in to open a “high-end restaurant” in the space.  Feeling burned by the landlord and Foreign Cinema for playing the role of quasi-homewrecker, activist-types picketed the restaurant on Sunday chanting “our space, queer space” and something about how good their bloody marys are.

Here's what the protest organizers had to say about the situation:

A valiant team of queer business owners have been trying hard to reopen the Eagle over the last year. After many months of hard work, they got the landlord to agree to a contract, signed it and sent it to him to sign. They didn't hear back from him for weeks.

These five straight dudes want to open up a high-end restaurant where our beloved Eagle used to be. One of them is a part owner of “Foreign Cinema” the $20+ per plate restaurant that lies at the heart of gentrified mission. These straight guys insist that they can support our gay community just as well as any gay owner. That's bullshit.

Now, the landlord who has refused to let a gay business owner come back to the Eagle is trying to slam through a liquor license transfer to the space. They're hired well connected consultants to get it through lightning fast - the City Operations Committee that first supported it spent a whopping 7 minutes for the entire meeting.

The “homophobia” bit sounds like the stretch, but it sounds like they have a point on the landlord being a bit of a greedy shithead wise entrepreneur.  Regardless, does it really make sense to drag Foreign Cinema into the mix?  Can you really blame 'em for taking advantage of an opportunity to serve yummy $6.75 pop-tarts to more people?

SF should obviously pass a Gay Control Ordinance that requires that gay-operated spaces in the City remain in gay hands. Get on it, Supes!

I’ve been fond of many bars in the city that have closed or - gasp - changed. It never occurred to me I could protest to get them to stay the same. Let My People Drink (in the same spot we used to drink)!

Straight privilege speaks! Say MORE! I never get to hear it!

I love the fact that shit like this happens in SF, even if at the same time it makes me wanna facepalm.

The “homophobia” bit sounds like the stretch? and he’s “wise entrepreneur”? you have got to be kidding me. get your head out of your straight ass and try contemplating something other than fine-tuning your snarkiness.

you don’t have to be queer to understand what a loss this was to the gay community and how important it is for queer business owners to be freely able to compete without getting elbowed out of the game for being queer. it’s called solidarity and respect. you should try it sometime.

Hey guys, I’m gay and I’ve been to the Eagle. It’s a loss, but seriously, don’t we have enough bars in the city? Aren’t there other locations that could serve the Eagle crowd? And shouldn’t we really be looking at alternatives to bars? I mean alcoholism is kind of a problem (gasp… I said it)

I’m gay. I don’t get this ‘preserve our gay bars’ or ‘gay operated spaces should remain in gay hands’. Huh? San Francisco is in pretty gay hands. Have you guys ventured outside of the bubble lately?

Have you even tried Foreign Cinema’s bloody mary? It’s amazing… but probably doesn’t come in a plastic pitcher served by some dude who will also yell at you for speaking to his ‘slave’ without permission.

Disturbing that THIS is what inspired those guys to get off their bar stools to protest.

I am straight and loved going to The Eagle. Cheap drinks, good bands and bbq’s.

If anyone would have supported the bar Monday - Saturday it might still be open. As it was I was shocked the bar stayed open as long as it did, considering if you ever went in there on any other day but Sunday, unless there was an event or bands the place was quite empty.

I enjoyed going to the Eagle on Sundays and it makes me sad to think Foreign Cinema will take over the space to serve over-priced food to over-paid hipsters. Newer gay spaces can, and do, come and go, but the Eagle has a certain historical status that should be respected and preserved.

Stop being prejudiced against straights; we’re people just like you, only with half as much cock sucking.