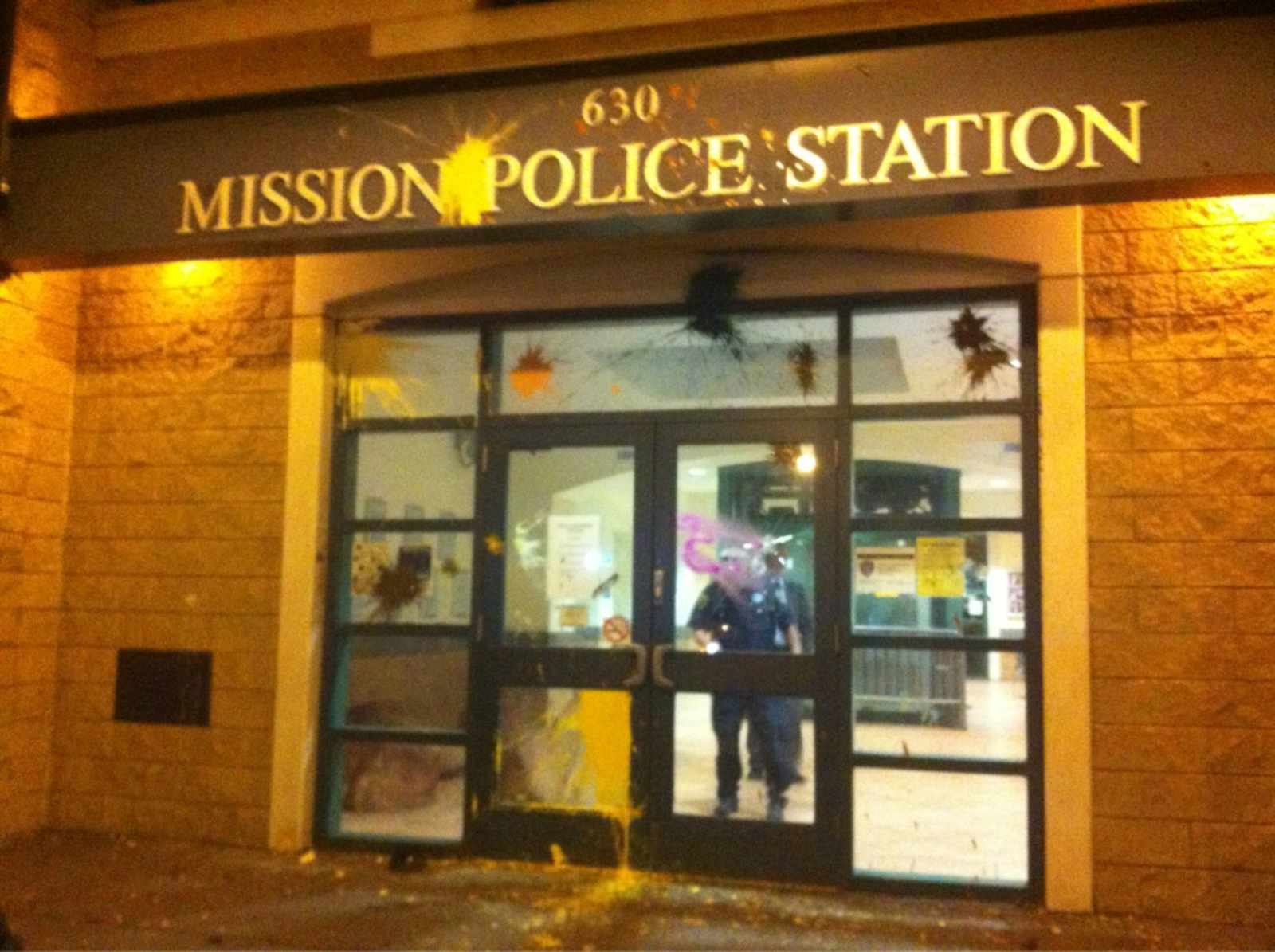 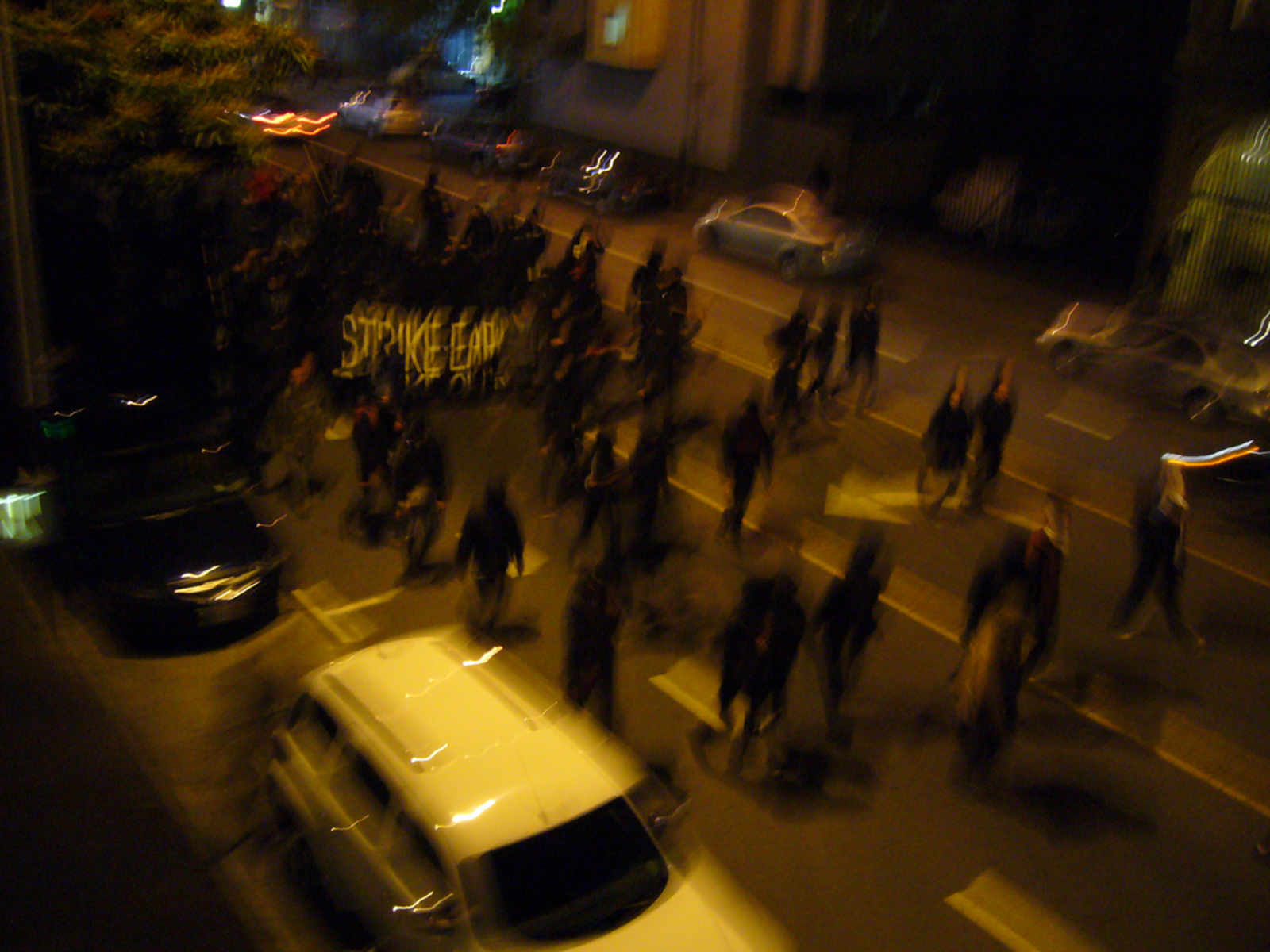 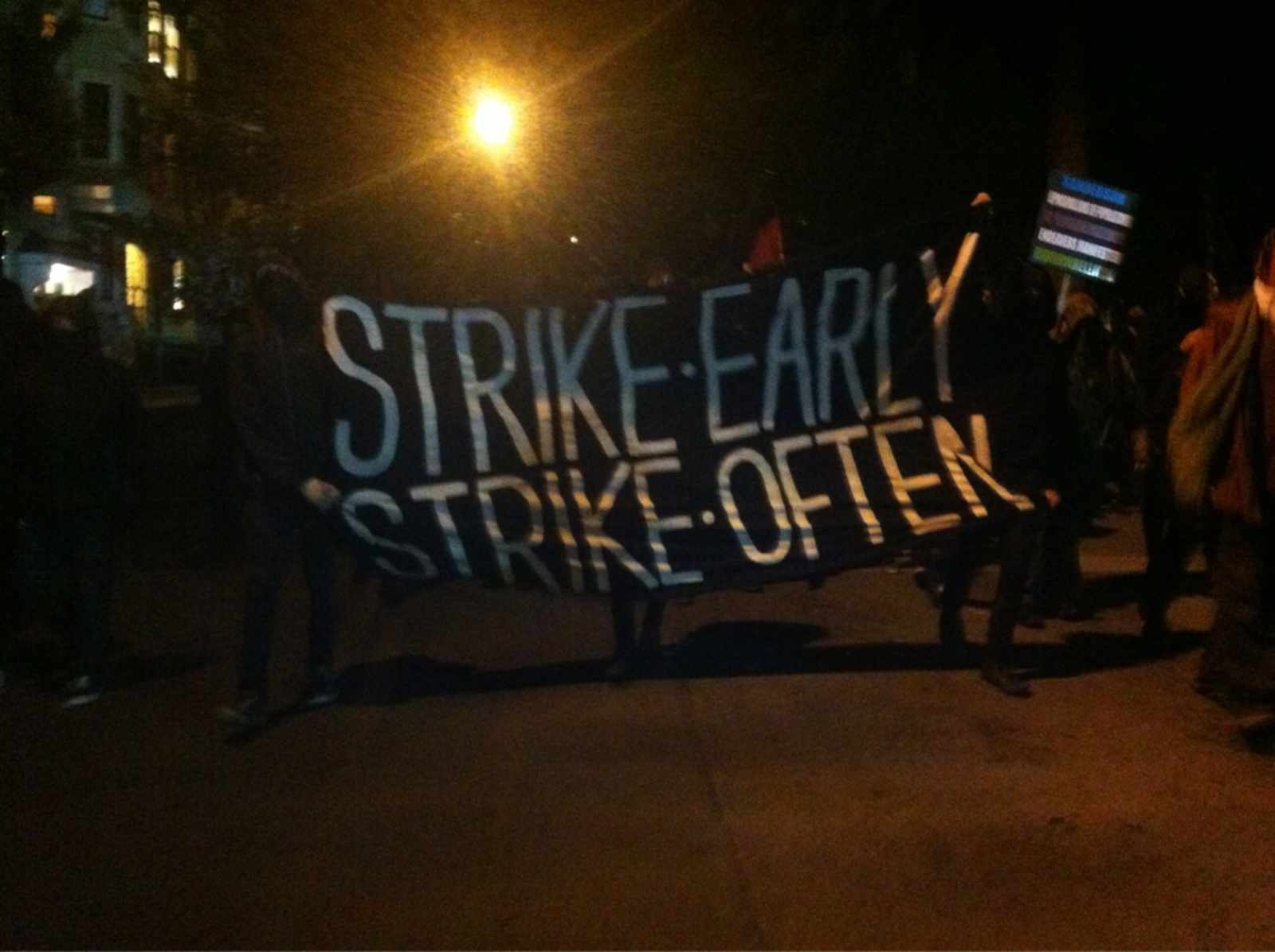 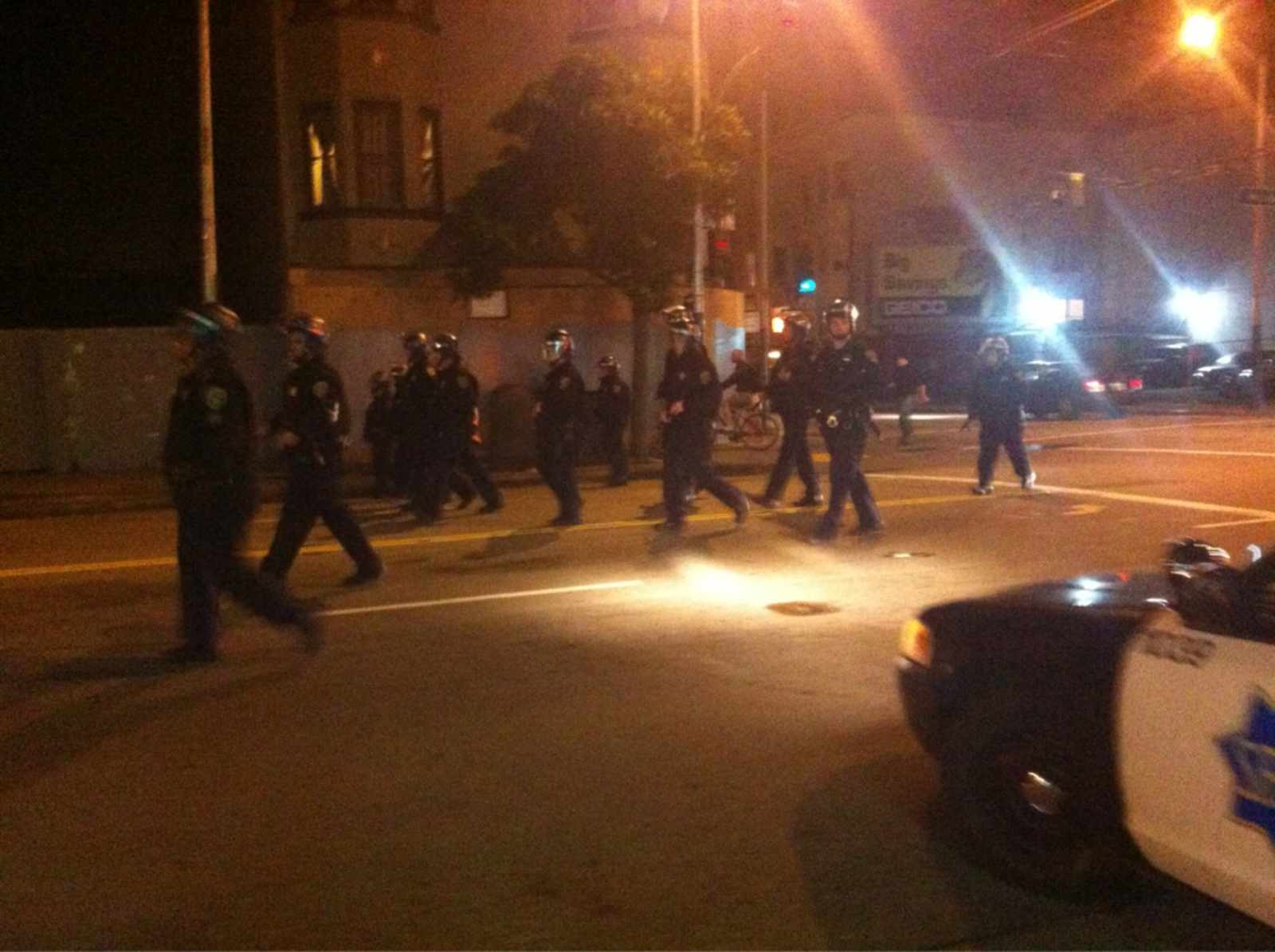 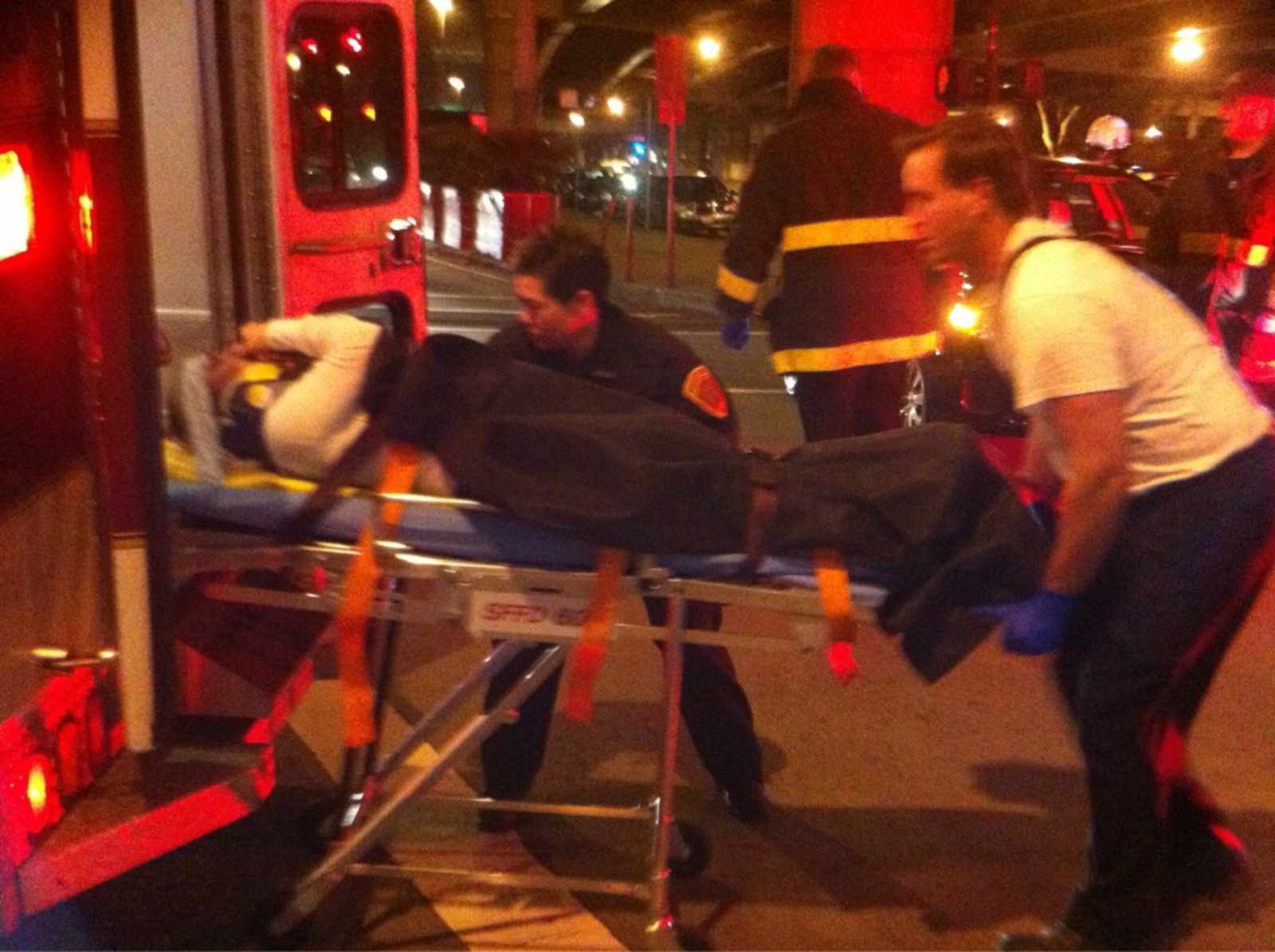 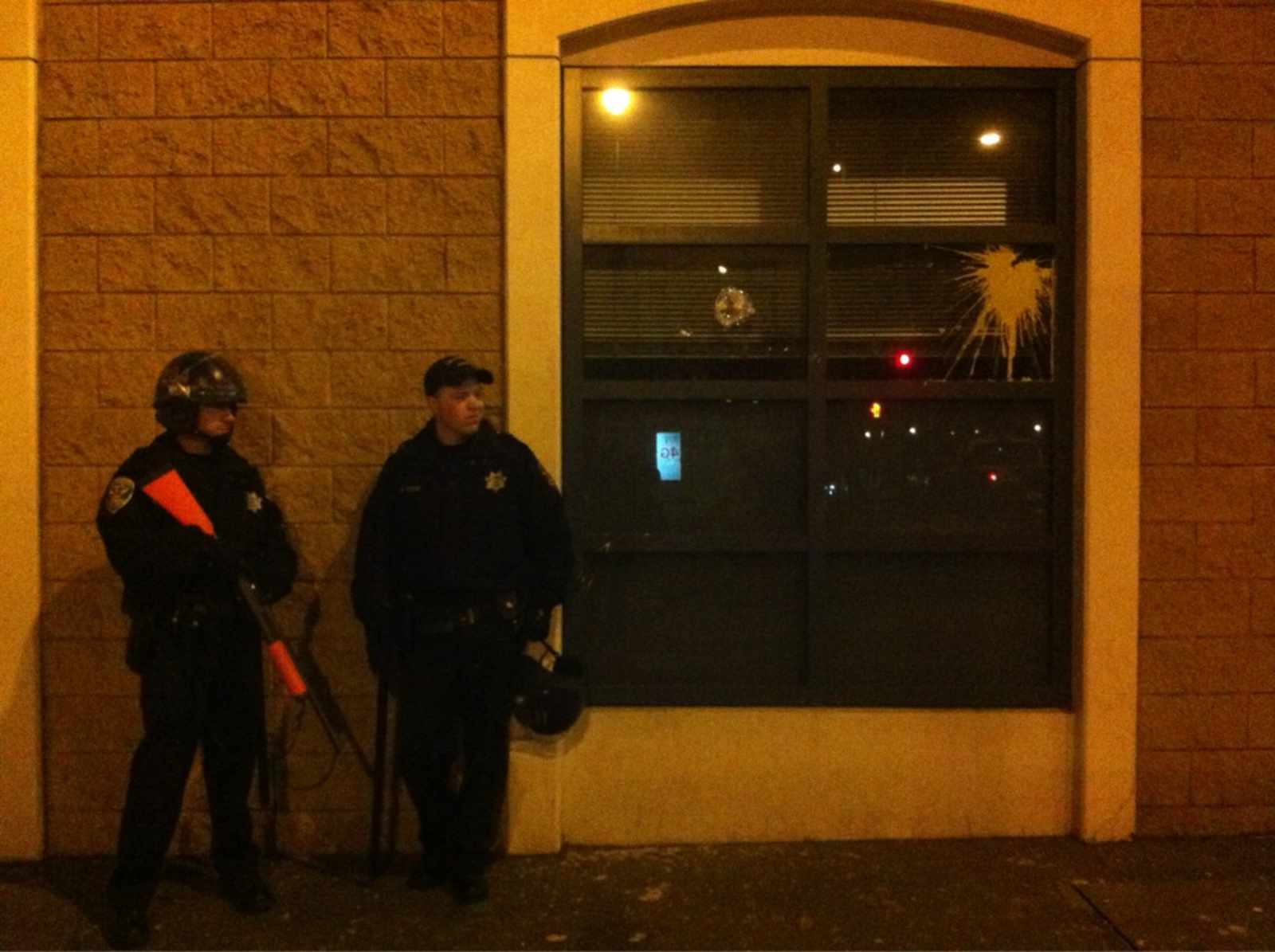 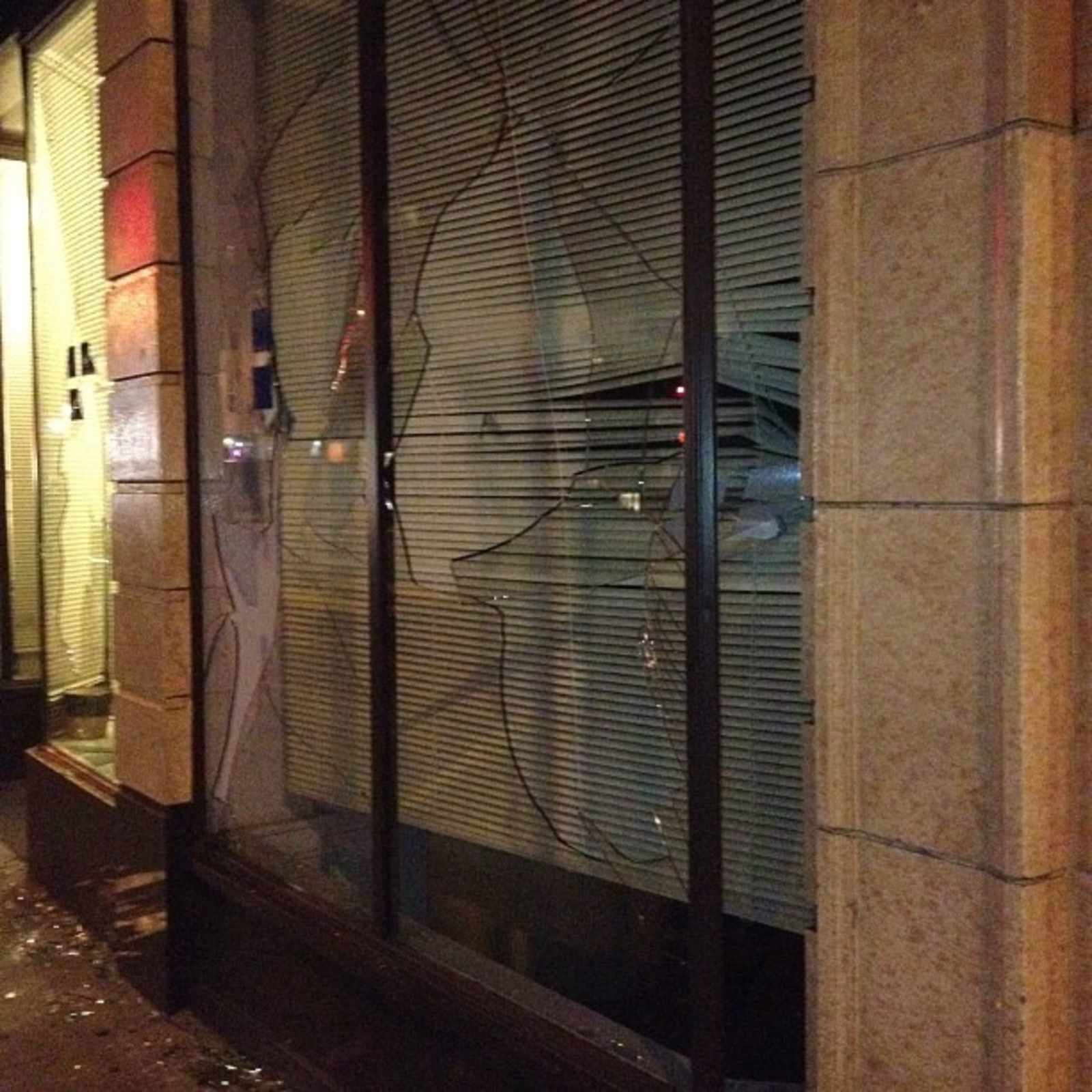 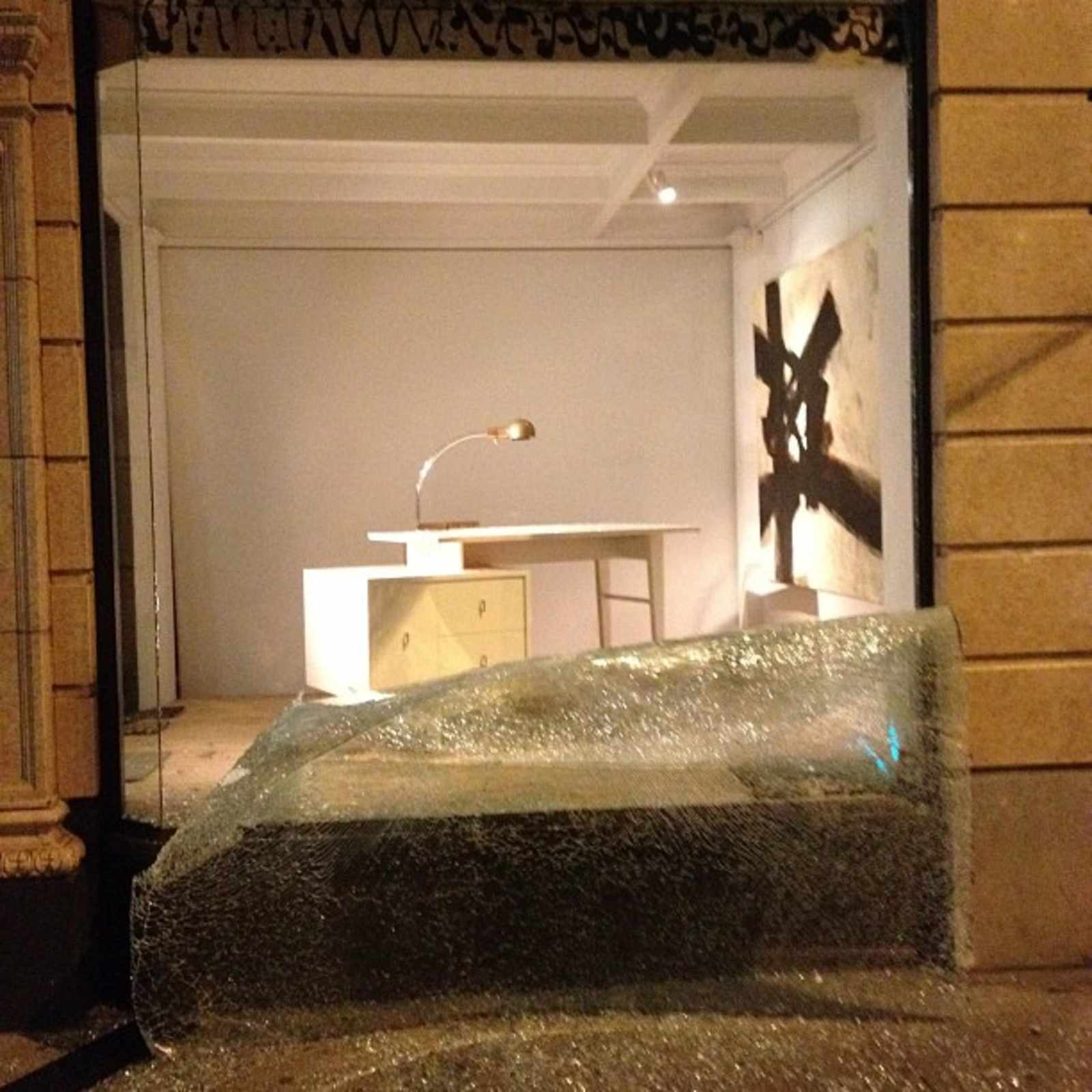 As I'm sure you've already heard (if you haven't, Mission Local has some solid reporting on it, as does Mission Mission), the Mission District unfortunately had its Foot Locker Moment last night as an innocent Occupy May Day rally in Dolores Park devolved into a riot along Valencia Street.  But as Scott Rossi (who seems to have been one of the few sane people in the mob) reports, the riot was not Occupy-related, but a “hijacking” done by mysterious clean-cut kids:

I believe we [the Occupy protests] were hijacked and it was an utter clusterfuck. It started out as sort of a “pep rally” type thing at Dolores Park, but maybe 20 minutes after we got there, it turned into a march. I tweeted “LOL looks it turned into a surprise anticapitalist march. #osf #oo #ows #dolorespark”. although i frown on the tactic of spraypainting and paintbombing, it was a bit funny to see the normally sneering people outside some of the boojie restaurants in 18th street get a little taste of their own class warfare. that said, what happened once the march reached Valencia was a) the fastest i’ve ever seen a march fall apart in my life and b) the largest concentration of simultaneous D: faces i have ever seen in my life. This is where I disengaged from the march, advised people I was pulling out and they were on their own, and told some people who were distracted or otherwise slow on the uptake that the march was entering ‘smashy smashy land.”

So, rather than describe what happened (since 340958345 other blogs and news agencies will do just that), I think it is more important to point out who did this. But as I’m about to explain to you, I don’t know that I can do that. You see, I don’t know who, the people I’ll dub as the ‘ringleaders’ of the march were exactly. Nobody did. Yeah some of the aggro people we always have to deal with were there, but these guys weren’t it. You remember those asshole jock bullies in high school? Well that was who was leading the march tonight. Clean cut, athletic, commanding, gravitas not borne of charisma but of testosterone and intimidation. They were decked out in outfits typically attributed to those in the ‘black bloc’ spectrum of tactics, yet their clothes were too new, and something was just off about them. They were very combative and nearly physically violent with the livestreamers on site, and got ignorant with me, a medic, when I intervened and reminded them that I was there to fix them from police violence, not protester on protester violence. […]

The other thing that bothered me is the level of destruction and the targets. This was all Bay of Rage Indybay organized, from what I gather, but it was all wrong. Black Bloc goes after state or corporate property not that of the working class and poor. I disapprove of that behavior, as it is not something I would personally engage in, however, this was off. This wasn’t directed against corporations or big banks, with the exception of one single ATM I saw smashed. This was specifically directed against mom and pop shops, local boutiques and businesses, and cars. Lots and lots of cars. I won’t weep for the hipster dives or the WASP nests for nouveau riche white trash, but the working class, poor and immigrant owned places I will. At first it was a few luxury cars, but as I followed the march down Valencia from a distance, it was all types of cars. There was a little girl crying and her mom was holding her and telling some onlookers that people smashed their car windows right in front of them as they were walking to it. She’s always going to remember the ‘mean people’ smashing. Everyone everywhere was really upset and blaming Occupy.

We’ve spent months radicalizing and empowering the Mission, working with and learning from groups who have already been here for decades, trying to use our momentum, enthusiasm and appeal to energize moribound organizations and skittish and apathetic people. We’ve been encouraging people to feel empowered to organize themselves, to get unions for day laborers, to march for and bring attention to our terrible immigration practices, hell the list goes on and on. It’s just convenient that these so called ‘protesters’ acted in such a way to undermine and burn all those bridges we’ve been so carefully building. The destruction was too calculated and precise in it’s seeming randomness to be Black Bloc or even those fucking suburban scumbags who get an anarchist patch at Hot Topic and think that gives them license to come to Oakland or SF and burn shit down. [Read On]

Scott has some theories on who might have been behind this (potentially classified as “crazy conspiracy theories,” but you never know in this crazy world).  But no matter who was responsible (and I'm going to be horribly articulate here), this just plain sucks. 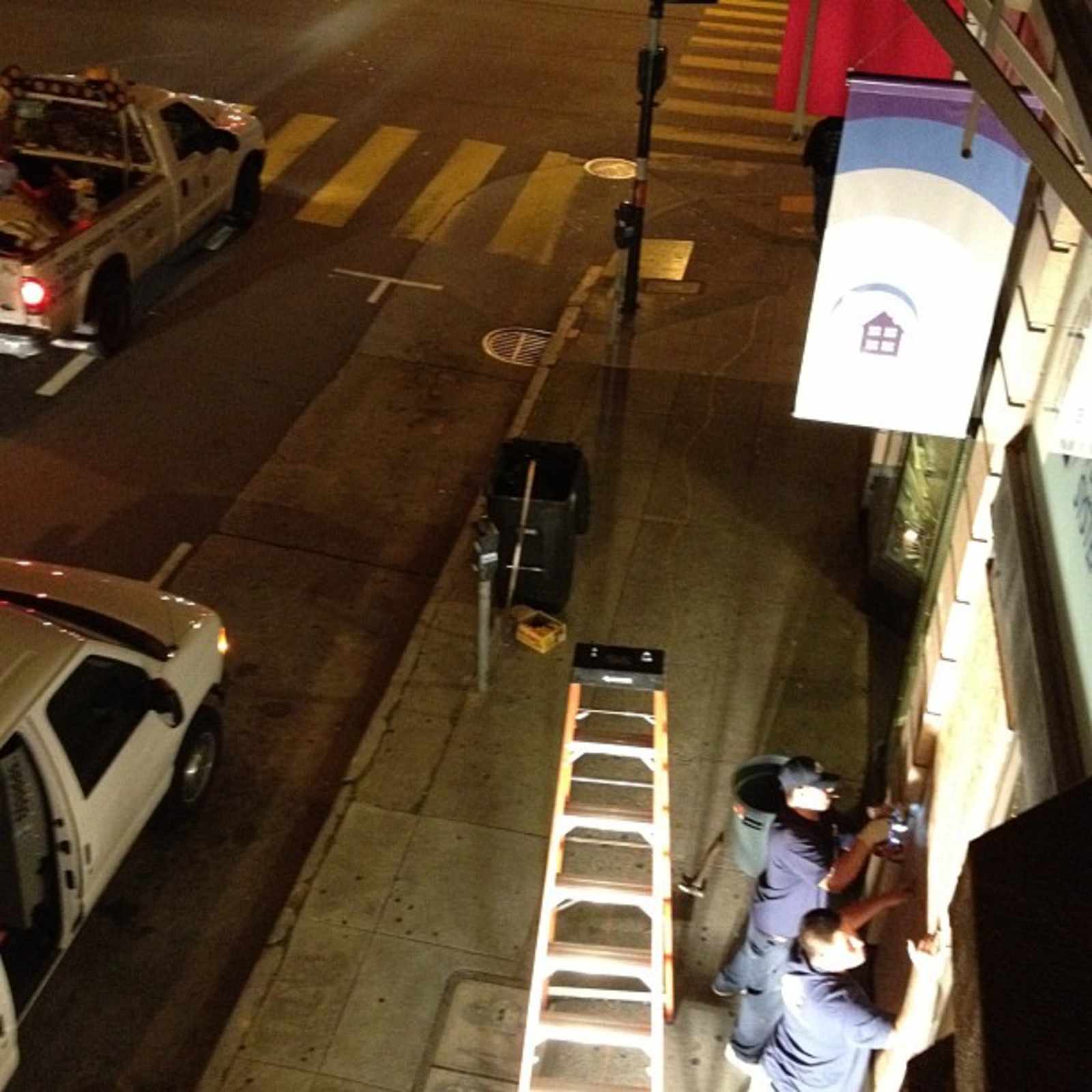 Nothing was “hijacked”. Occupy Oakland posted this event notice for a “ruckus street party” and removed after things turned south.

I wonder if anyone got pictures of the guys described by Scott Rossi. If they could be identified then there’s a chance of mitigating some of the bad PR.

Some of the worst paint vandalism I saw was at the senior housing building between the police station and the new Amber India spot. Because if there’s one thing radical activists hate, it’s … public housing for seniors?

It’s a low-down fucking shame that the Occupy movement and message is being hijacked by the blackbloc fucking retards that attach themselves to every protest in the bay area.

So long as Occupy insists on being a disorganized “group” they will be hijacked by assholes. I think Occupy is done for now - they had a chacne to connect with people that don’t look like them or act like them and instead chose to stick to their own instead. A pity.

Y’know… Maybe it was a small group of “hijackers” or whatever that co-opted a peaceful gathering, but if you’re an adult and you’re blaming “jocks” for fucking up your peaceful rally you sound pretty ridiculous. There has to be a way to explain it without sounding like a scene from a Revenge Of The Nerds straight to dvd sequel.

And that’s coming from someone who got pretty hammered on by jocks in high school.

“I won’t weep for the hipster dives or the WASP nests for nouveau riche white trash, but the working class, poor and immigrant owned places I will.”

This post is about something shitty that happened. But can I call attention to the above statement? What a slippery slope, dude. Do you check their reported incomes before you decide whether or not you support destruction of their property? Is this the same policy you employ as a “medic?” I hope you never took the Hippocratic Oath. Or maybe you’re okay with only serving poor immigrants in that area as well. Because if you work hard and happen to be successful doing it, you probably don’t deserve respect or health.

Do these occupy people know that no one gives a shit about their “message”, if they even have one at this point. Most of the country just looks at them as a bunch of lazy a-holes who don’t want to work, and would rather play anarchist. This night sums it up perfectly. Why don’t they try doing something productive to enact change instead of just being destructive and destroying small businesses in a working class neighborhood.

The guys who did this are out for a cheap thrill, nothing more.

“Strike Early; Strike Often” is written on your sister’s panties.

fuck this i am so beyond livid. my car was broken into and shit was stolen out of it. really NOT fucking cool.

Here’s the webcache of the Occupy Oakland site promoting the “ruckus”: http://webcache.googleusercontent.com/search?q=cache:tjtkvnFwUhYJ:occupy…

Occupy is not a movement.

You invite a bunch of people to come to a “Ruckus Street Party,” and then people get ruckus, and you are all like…we got hijacked - they aren’t part of our unorganized movement.

I just wanted to say, in retrospect, heh, that I’m sure screaming at a giant mob to stop trashing my home and my friend’s store is totally pointless… but in the moment, when I was shocked and confused and panicking, I guess that’s what I do. Kinda like the time I got mugged at my front door—some guy came up, snatched my laptop and hopped into a getaway car—and I yelled after him, “HEY, THAT’S MY WORK!” as if he would stop and say, “Ohh really? My bad, here you go.” Anyway, life goes on. I’m just glad nobody was seriously hurt. I love this neighborhood. :)