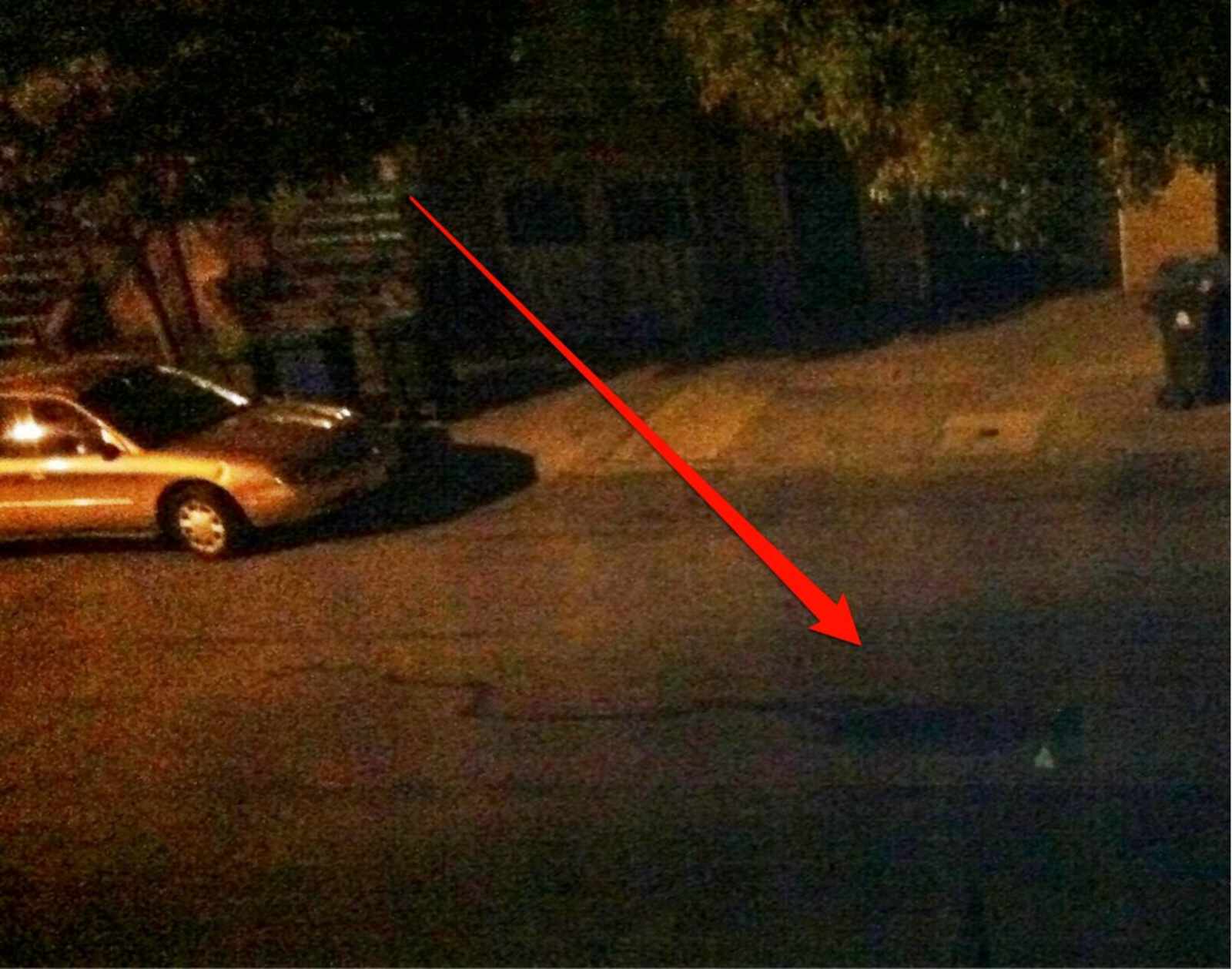 An anonymous tipster just sent this in:

I don't know what just happened on Oakwood (frankly, it looks pretty bad), but some bystanders allegedly claimed it was a stabbing that “had to do with drinking at Dolores Park all day.”  Just FYI.

No idea if it was related to the fight I witnessed earlier.  I'll update if I hear more.

Update: Ryan just emailed this in:

Just came home to find 19th between Guerrero and Dolores completely shut down, as well as most of that segment of 18th. Ambulances, fire trucks and cop cars lined the street in front of Bi-Rite, with some kid on a stretcher with an oxygen mask. I talked to some girl who, choking back sobs, managed to tell me that someone got stabbed. I tried to console her but she was pretty traumatized. I walked up to some cops and was berated by one of them, but the other said they were dealing with a stabbing, and to go inside.  I live right across the street and it looks like it occurred on Oakwood, connecting 18th and 19th, right next to the Bi-Rite market. Heavy.

Update III with some additional thoughts:

There was undeniably some evil energy in the park today; quite unlike anything I've ever felt in the park before.  It was so bad that for the first time ever, I actually got up and left The Park because of the atmosphere.  And as Daniel tweeted, I clearly was not alone.  People at the vista corner of the park even were joking, “when the messengers from One Post bail and come up here, you know shit's fucked.”

I'm not saying this because I'm scared or freaked out or packing up my bags to move to Walnut Creek.  No, stabbings happen all the time in the Mission—it's terrible and inexcusable, but we all moved here knowing that. I say this because of what our tipster said in the first email. [It] had to do with drinking at Dolores Park all day.

We're assuredly going to hear in the coming weeks from the likes of C.W. Nevius, gray-haired neighbors, and “concerned parents and neighbors” about how it's time to cut back on the liberty we all enjoy and cherish.  “Shit has being going too far for too long.”  “A stabbing? What next? A SHOOTING?”

There'll be community meetings in which people berate Sup. Scott Wiener and the entire Parks & Rec staff.  There'll be demands for SFPD to crack down on public drinking.  I've sat in Dolores Park meetings exactly like this countless times—this aftermath is a given.

But what these people always miss—and this is important—is this horrible fight would have gone down no matter where these kids were drinking.  It could have been in an alley, or Precita Park, or under a bridge off of Cesar Chavez.  The truffles and the open containers on Hipster Hill were not the problem; no, an estimated 12 million people responsibly enjoy these liberties every day.  And I've logged more hours with my ass planted on Dolores Park's grass than anyone I know and I've never once before been made to feel the park wasn't safe.  The problem was these kids, specifically and individually.

So, please, let's not lose our collective shit over a couple of swine and ruin a beautiful thing.

Update IV: Here's the video I took of people fighting in the park earlier (in this video, they're chasing a dude out of the park).  If I had to make a guess, these are the people involved, as they were fighting shortly before the stabbing (I took the video 9 minutes before it went down), breaking bottles, brandishing knifes in the park, and generally acting like shitheads:

Officers responded to a call of multiple stabbing victims at approximately 6:30 p.m. As of 10:45 p.m., officers were leaving the scene. […]

Officer Albie Esparza said that five people were involved in a verbal altercation that escalated into a physical fight that injured two people. […]

Esparza said that the suspects, who are described as being in their 20s, fled the scene. The only description provided by police was that one suspect was short and the other stocky. [link]

wait, kevin, what energy? were kids just fighting and shit? your video doesn’t really show what the title would suggest.

“Evil energy”? What does that mean? Can you be more specific about what you saw/felt? I’ve just never experienced this in the park (maybe I’m just oblivious) and am curious.

This is still hearsay from other bystanders, but current story is that two dudes jumped someone known to them and then ditched a bag full of beer under a car whilst fleeing. Actual stabbing occurred at 19th and the guy inexplicably walked along Oakwood to 18th, where I saw him sitting and being questioned by cops who were trying to keep him conscious. Cops were all great, BTW.

Also, possibly related (?), an older woman had a heart attack on either 19th or Oakwood just after the stabbing and there were extra ambulances for her.

I’m not about to let this affect my enjoyment of the park or neighborhood. I agree with the “additional thoughts” that this could have happened anywhere.

And I’m vaguely amused by the crime scene tape by Bi-Rite. Fair amount of blood too. Oakwood is still blocked off, as of this posting.

These morons have been sitting in the middle of the hill for days. Haight Street gutter Punks!

Thanks for the info, just got turned on to this site.

I live across from the park and walked outside my house to hit bi-rite for dinner and came across this whole scene. The cops on the scene were complete dicks. They saw me walk out of my house, (which I pay insane property taxes on, which in turns pays their salary in some indirect way I’m assuming – oldest one in the book but seems particularly poignant here), and then acted all indignant when I had the audacity to ask in a polite tone why my street was closed down with police tape everywhere. I know, this is a bit off topic but the quote about being berated by the cop got to me.

I moved to this neighborhood 10 years ago and I feel like the cops have become more and more aggressive with each passing day, and have used every excuse to exercise more and more power in the name of safety. One of them actually punched my car as I was driving last week. Seriously, that actually happened. I have been physically intimidated by them twice now since I moved here (counting car-punch 2012). I am a gainfully employed, law-abiding citizen who minds my own business, pays my taxes, and works hard to be able to live here. Yet every day the people I fear most are the cops in my own neighborhood. Not getting stabbed at the park, not getting shot on 20th, the cops.

True, if someone was breaking into my house, the first thing I would do was call the cops. But that doesn’t change any of what I just said. Just because someone relies on you for help doesn’t mean you have the right to treat them like dogs.

Anyways, what happened tonight is sad but typical. In just the past year that girl got stabbed 11 times at the dog drinking fountain, the guy got stabbed/robbed up at the top, and the other guy got shot 4 times at 20th. Urban parks will be urban parks. All the gentrification in the world won’t help that I’m afraid.

Insert Ben Franklin liberty quote here; but seriously, keep the park free. These idiots will kill each other no matter where you put them.

When I was at the park during lunch, there was a crowd(probably the same or related crowd) of gutter punks fighting, while some girl in the group who kept telling everyone “it’s o.k. they are friends and they just need to do this”. They would fight and then hug it out. It was fucking strange. Of course someone in the group ended up getting punched in the mouth and then things got even more weird. We left not long after a guy who may or may not have been from another come over a kick the dudes on the ground fighting.

Thanks for the details

I shoulda done something when I was there during the day. I’ll take an ass beating trying to “police” the park if some of you all want to help. Just let me know. cheers

Sounds like a case of “someone should have called the cops sooner.”

As much as it sucks to be the guy who calls the cops to the park, as we’ve seen here the consequences of NOT being “that guy” can be worse.

I can’t help but be a little peeved reading this. The park has been a gang war zone for years. Dealers used to get cops to escort them out of the neighborhood because they were scared of getting shot. All this skinny jean expensive ice cream and beer shit started less than 5 years ago. Yeah, there’s probably going to be some fights. Don’t act surprised. You’re new.

We’re assuredly going to hear in the coming weeks from the likes of C.W. Nevius, gray-haired neighbors, and “concerned parents and neighbors” about how it’s time to cut back on the liberty we all enjoy and cherish. “Shit has being going too far for too long.”

I dislike Nevius, but I am graying hair neighbor and concerned parent.

The fun at Dolores Park is good for all of us, including those of us too old to fit. Answer is Community Policing. Things like cops on ten speed bikes, rather than any zero tolerance policy. Keep the fun, but get rid of the agro idiots.

Have you see the plans for the gentrification/sterilization of Dolores Park yet?… http://www.huffingtonpost.com/2012/03/01/dolores-park-redesign_n_1314269…

Yes, I am a parent of a person living where the stabbings occurred. This person was raised in “liberal” areas, by “liberal ” parents, attended private “liberal” schools, and was educated in non-violence.

After this person sent me a link to the stabbing info. I immediately “reverted” to my (previously unknown) “inner Republican”. My kid needed to move, immediately ( Yes, Walnut Creek sounds appropriate, a gated community), increase police presence in the area, everyone needs to constantly call the police.

I see that other bloggers are already expecting such parental responses, so I obliged.

I popped by a week ago for lunch during the insanely nice weather. Plenty of people selling all sorts of things even before the park really filled up, and one shoeless crazy looking fella was telling another vendor to stay off his turf, literally drawing some sort of line in the dirt. Things were fairly civilized, but the guy came back and they were just starting to have another “conversation” as we left.

Totally different situation, but I felt some bad energy there related to the commerce going on. Sure, nothing like 15 years ago (or so I’m told), but I had to wonder long it would be until some enterprising SF State dealer got his head bashed in by a more lifelong criminal element.

Little school children pampered to death who claim to know how everything turns out, desperate to keep fucking/smoking/drinking before mom and dad get home. Pathetic waste of a generation.

Don’t worry. Things will improve when the playground opens up and you have the likes of me and my kids in the park again. I have no problem calling the cops on knife-wielders. And I also have no problem with drinking beer and smoking pot in the park.

Any followup to this?