Dealing With Dogs in Dolores Park 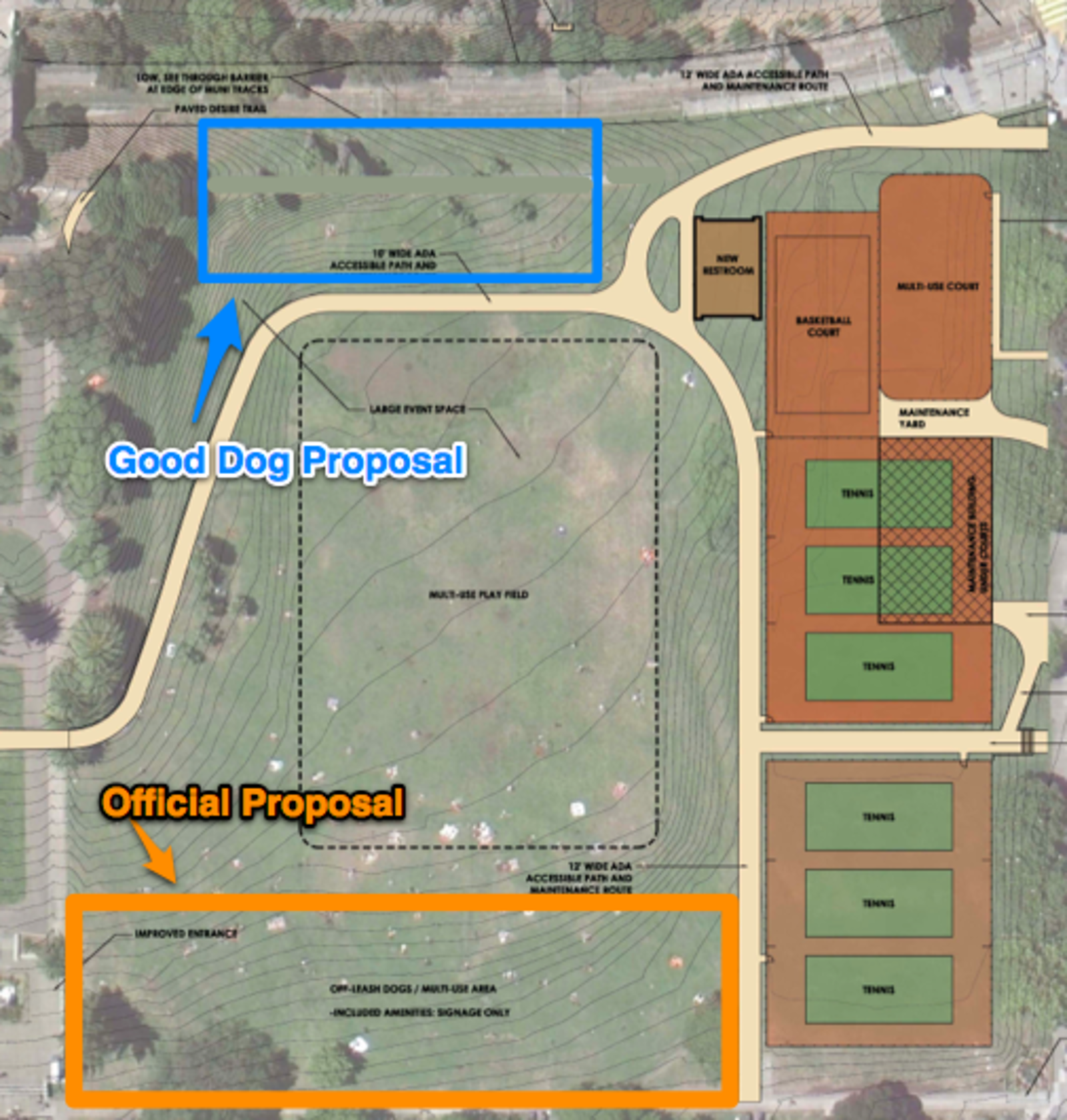 As you may or may not know, the little slice of Dolores Park irritatingly known as “Hipster Hill” is currently home to an off-leash dog area, granting people the legal right to let their mongrels frolic in the grass and maul lesser dogs.  Not that any of that really matters right now: the entire park is a de facto off-leash dog play area.  Besides, no one really wants play fetch among hundreds of lolling picnickers anyway.

Well, the on-going park renovations will bring us an updated layout of designated usage areas with increased signage explaining the rules and boundaries, and the revised off-leash dog play area is smack in the middle of Tecate and bowls ground zero.

Well, a new dog play area means new amenities, and some of the proposed features of the forthcoming Cool Kid Dog Park include benches, paths, dog fountains, and, almost certainly, signage along the boundaries of the dog area designating it as such.

Alex Chaffee, who describes the plan as “horrifying,” breaks it down:

The biggest problem with that area is that it's already claimed by the hipsters! If [Dolores Park Renovation Steering Committee] comes out with plans that have paths or benches or boulders or dog fountains or even signs smack in the middle of the most trafficked, most used part of the park, then the conversation will immediately turn into a loud, public fight pitting dog owners against hipsters (with onlookers cheering and jeering at all parties). […]

It makes no sense to put foci for two incompatible activities in the same spot. That's an inevitable recipe for conflict between two otherwise harmonious uses of the park. But sadly, the current north field dog area plan does just that.

And unlike most people who like to bitch without proposing solutions, Alex has an idea for how to remedy the situation:

The current Dolores Park plan has an off-leash area in the North-East corner of the park, directly covering Hipster Hill. This is arguably the worst possible place to have a dog area. Instead, we should put a dog area along the North-West edge, which would be safer, easier to maintain, and less likely to lead to conflicts. […]

I propose we remove a section of the current sidewalk path (going from the Muni stop up the hill to the steps just north of the bridge). This will compensate for the addition of a 10' wide path right nearby by regaining green lawn.

The removal of the straight path will improve traffic through the park by encouraging strollers to meander along the ADA path.

Alex has a lot more to say about the issue and explains more thoroughly what an alternative DP dog park could look like.  He encourages people to attend Thursday's renovation meeting in support of the project, which, being honest, we already know you won't (they're boring anyway, but the complimentary cookies are tasty as all hell).  However, if you want to show your digital support or opposition, there's a comment form at the bottom of both this post and his proposal.

Has there ever been discussion of building a dog run or two in the park? Seems like every park in NYC has one of these things. Or is this too akin to doggie repression?

Alex’s revised idea sucks they should move the hipsters over there not the dogs. It’s a hill that is too close the rail tracks that no one cares about so it’s perfect for hipsters. I love letting my “mongrel frolic in the grass” and could care less about hipsters.

Hipster hill is too close to the street! The hill by the train is already where I always take my dog. That way if the ball goes too far it’s down into the park, not out into traffic.

The should make the entire park OFF LIMITS to dogs

What if my dog is also a hipster? I’m confused.

God forbid they just leave it the way it is now, hipsters and off-leash dogs enjoying the park together in harmony, nobody needs “designated areas.”

I don’t care what they do, so long as they put in a monorail.

What if I keep my hipster on a leash?

Make the hipsters sit in the dog shit. See how they like it.