Grub's Neighbors Fed Up, Demanding City Take Them to Task 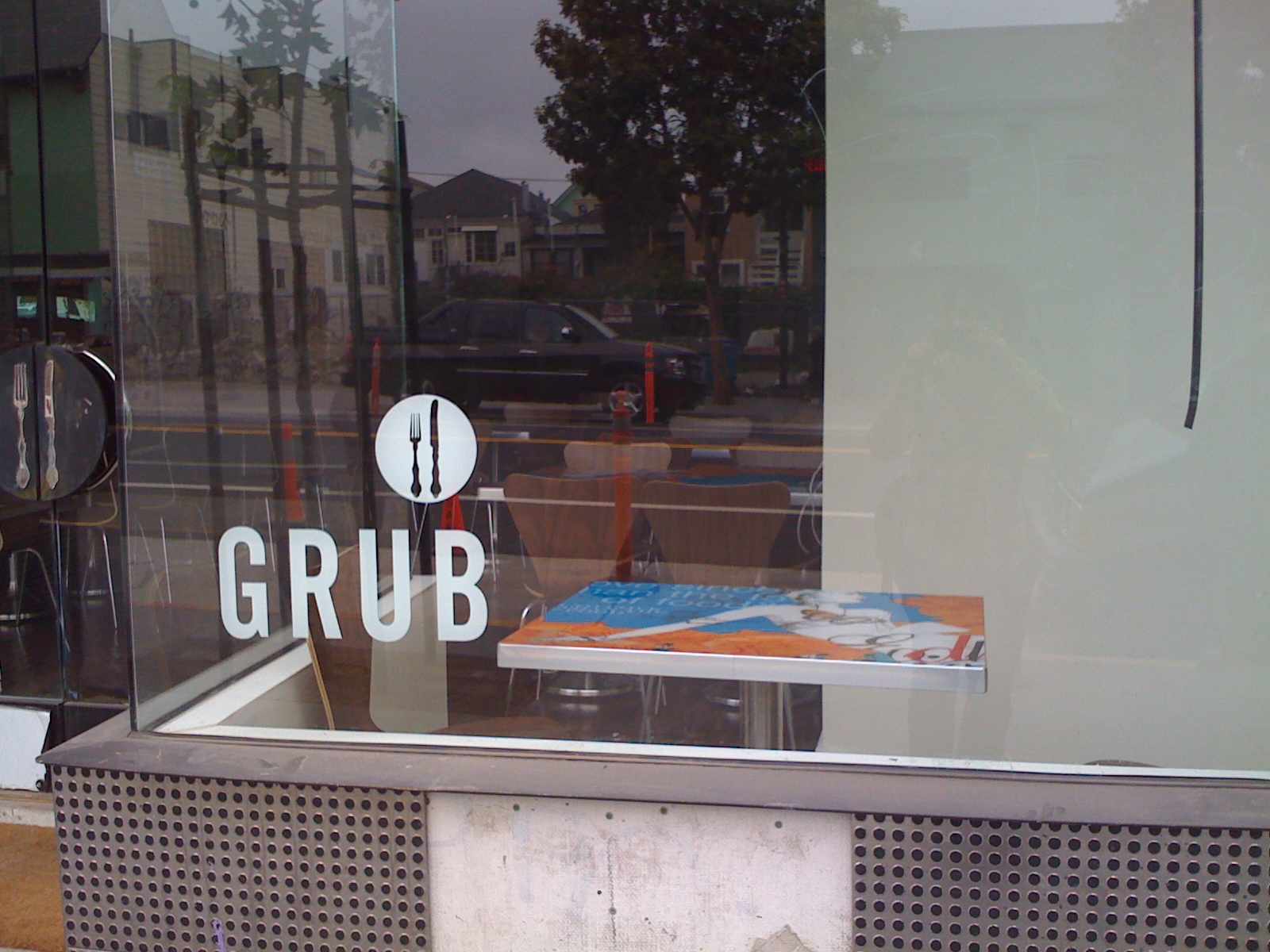 A petition being passed around by residents of Lapidge Street and neighboring Valencia businesses is going after Grub, the fledgling restaurant on Valencia on 18th known for its delicious mac n' cheese and hideous interior.  The petition to the Department of Public Health alleges a whole bunch of things, including the restaurant producing “earth quake like [sic] vibrations” that are destroying homes, rent control-protected residents “being driven out of their homes,” and a whole bunch of other nasty stuff that makes the situation sound fairly miserable.  The petition begins:

Grub Restaurant opened for business at 758 Valencia Street in October 2010. The restaurant is open for dinner 7 days a week until 1 AM plus brunch weekends. From day one of its presence, we neighbors have endured a constant assault on the senses. We immediately alerted the Department of Public Health to this situation. Since October, the neighbors have been in constant contact with DPH. Although we have taken great time and expense to document our concerns, the Department has failed to reduce the excessive noise levels.

Grub has met the neighbors’ complaints with intimidation and harassment. One or more of the owners has shouted obscenities at neighbors on more than one occasion. They have also explicitly threatened neighbors with retaliation. Grub’s conduct is documented in multiple police reports, including Case # 110292383. With no assistance from DPH, we secured proof that Grub installed its machinery without permits, as shown by the Department of Building Inspection’s findings. DBI has further determined that this unpermitted work does not meet code.

While the appeal immediately comes across as typical NIMBY bullshit, it's authored by one of the neighborhood champions of last summer's NIMBY-plagued Mission Bicycle Festival, giving the neighbor some credibility.  Another neighbor, who had nothing to do with the writing of the petition, backs up one of the claims, noting “I have to say, the Grub owners appear to be douchbags.  Not that I would ever judge anyone by how they look, but they pace in front of the restaurant with their dress shirts untucked (Marina style) screaming on their bluetooths.”

The petition goes on to discuss, in great detail, the failings of the restaurant and the city: Housing Code violations, Noise Ordinance violations, negative reports from the Housing Inspector, acoustical and vibration experts being brought in, unpermitted construction, and failures by the Department of Public Health to hold their promises.  Perhaps the best line of the whole thing:

Now, neighbors whose homes are protected by rent control are being driven out of their homes. Grub’s machinery is literally eroding our homes and health. We are suffering from chronic sleep loss, weight loss, and living under extreme stress. Our homes are battle zones complete with the constant drone of machinery.

Presumably, this doesn't bode well Monk's Kettle's “fancier” beer bar and other late-night offerings set to open on this block later this year.  The neighbors are clearly organized, know how to get city to go after businesses, and don't seem to appreciate the noise that comes from late-night restaurants in their backyards.  Should make for some interesting summer drama.

Feel free to read the entire petition, if you're into that sorta thing.

Moving into an apartment on Valencia Street in the middle of the Mission… who could *possibly* have foreseen that that might be noisy? While I’ll give the letter-writers the benefit of the doubt given that their requests for mitigation seem pretty reasonable and specific,
these complaints, in general, do kind of rub me the wrong way. I’m very noise-sensitive too, and I’d be sleepless and stressed out if I lived above a restaurant like this, which is why I choose to live in a very quiet, semi-suburban area of Glen Park…

Yeah the neighbor I talked to is hot, I offered to come by and experience the earth quaking vibrations but no, it didn’t happen.

I like the menu for the most part but the tude in this place is unreal..

Went in at 7pm on a Tuesday and despite 8 empty tables I was told by a bitchy hostess “We are booked for the night, sorry”. Booked ALL NIGHT? Wow!

yeah they’re so-so at best, i’d be pissed if i lived on an alley (not even valencia, for yall haters) that is supposed to be quiet and some douche-y, mediocre, busted ass, broke ass, yuppie ass, punk ass mf-ers moved in behind me.

and the restaurant isnt even that good cept for the mac. did i mention that

I saw them renovating this place. It took forever . Everything was the cheap way, so it isn’t to surprising that they bought the cheap loud fan,

That’s what happens when you take so long to open that the neighbors get used to a quiet, empty storefront.

Remind me, what was this place before??

The city’s rules around exhaust fans and other noise pollution are exactly this weak: 40+ decibels is no problem, and to reduce noice pollution the city suggests you install double pane windows.

Its just stupid. People can’t enjoy their yards and decks because the city has lame noise pollution laws.

The progression is always the same bro. The neighborhood goes like this over the years:

Sorry, if a vibrating fan is giving you colitis, it might be time to move to the country

If people would just be cool there’d prolly be no beef.

“Hey bro, your restaurant is seriously pissing off the hood.”
“Damn, I’m sorry, let’s see if we can’t work a schedule to minimize the disturbance.”
“Hey, thanks. Now we will patronize your establish and everyone will win.”
“Hellza groovy cousin let’s spark this blunt.”

But then this is SF.
“Hey bro, your restaurant is seriously pissing off the hood.”
“Fuck your face, I spent tens of thousands on my this bland restaurant so one two three four I declare an asshole war!!”
“Too late blackberry bitch, I’ve got Ross Murikami on speed dial and I just carpetbombed you on Yelp.”
“I just ordered a jackhammer and I’m pouring my fryer grease into your potted plants as we speak.”

Most everything from Valencia west is known as The White Blight.

It may not sound like a big deal, but this type of constant sound is a serous public health problem. The owners need to look into one of the many engineering, or even DIY since they don’t have permits anyway, solutions. Like a silencing pad, or a baffle, or some sound-deadening wood, or servicing the fans. But, no, let’s put all the attention on the neighbors…

Wait, so this place has no connection with Spork?

The complaint may seem trivial, but I am suffering from this from my own neighbor. Yes, SF is a city and therefore noisy, but constant vibrations are on a totally different level than screaming drunks and car traffic. I have been arguing with my upstairs neighbor for a year with his lame excuses as to why he needs a ‘fan’ if that is what it even is. It sends vibrations through the house and is worse when my head is on my pillow. I suffer from lack of sleep which causes me to have teeth grinding, aggravated TMJ, migraines, and general crankiness at work and in my personal relationships. I feel like I am in a prison 24 hrs a day, I can’t even come home from work and relax during daytime hours. I totally agree that if people move in after a business is already established that’s their problem (ex. people moving moving into SOMA then complaining about the nightclubs) but if this problem starts after persons have been living there it’s total crap.

Listen to the hearing before the Sunshine Ordinance Task Force: http://www.sfbos.org/index.aspx?page=9811
It is the 6/28/11 hearing. The one that says the audio file is incomplete due to technical difficulty.
The relevant portion begins at approximately 01:47:00 and goes to the end.

power to the people