Not Washing Your Jeans is Both Sanitary and Nauseating 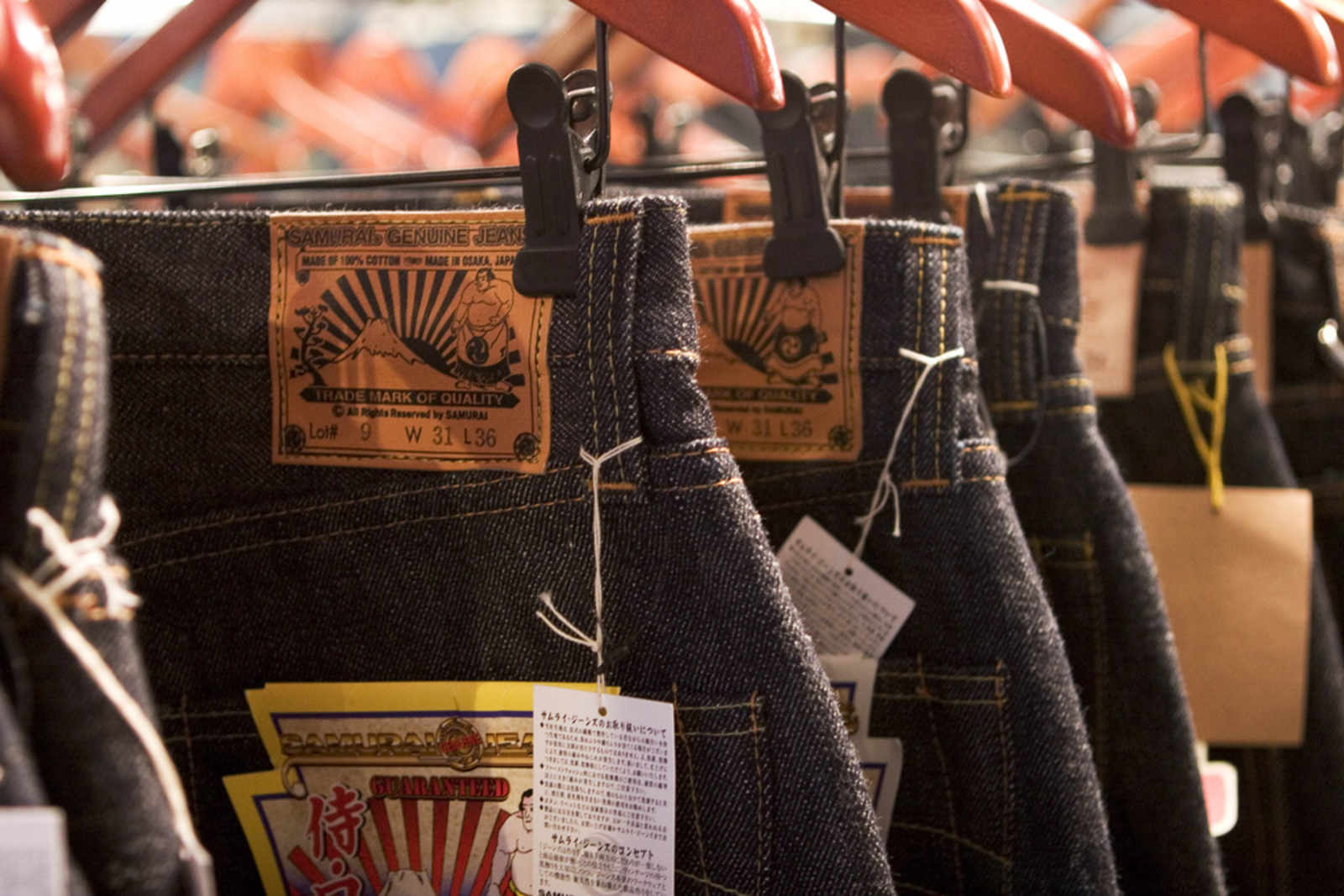 Over the years, I've had a number of friends buy $300 pairs of jeans over at Self Edge and proceed not wash them for 6 months.  Now, I never quite got the logic behind paying a half-months rent for jeans rather than just getting a cheap pair of Levi's, but everyone has their own fashion priorities.  But not washing your pants for six month? Yeah…

Well, some student put his college education to good use and discovered not washing your jeans for 15 months is 'completely safe':

A University of Alberta student didn't wash a pair of skinny jeans for 15 months and science says the fashion trend is safe, but maybe a tad smelly.

Josh Le wore the same pair of jeans to break in the raw denim, so it would wrap the contours of his body, leaving distinct wear lines.

He had his textile professor test the jeans for bacteria before washing them for the first time.

The results showed high counts of five different kinds of bacteria, but nothing in the range of being considered a health hazard.

The article went on to say that whenever the jeans became “a bit funky,” he'd toss the jeans in the freezer and they'd “magically” come out odorless. So there you have it people, skip wasting all your money at the laundromat and start leaving your jeans next to the Costco bag of boneless chicken breasts that have been sitting in your freezer since July.

I never wash my jeans. Otherwise, they fade like crazy and shrink a bunch (even in cold water). Maybe once or twice a year i’ll have them dry-cleaned, but that’s about it.

Unless you’re wearing jeans made of wool, shrinking is not really a problem. There will be some shrinkage right out of the wash/dryer, but they’ll stretch right back out in short order. Gotta love that cotton.

you have no idea what you are talking about. unsanforized denim shrinks several sizes during the first wash/soak. they never stretch back to original size.

Uh.. Unless you’re buying “Shrink-to-fit,” or some weird off-brand, your jeans are already Sanforized.

“Over the years, I’ve had a number of friends buy $300 pairs of jeans over at Self Edge and proceed not wash them for 6 months.”

the vast majority of jeans at self edge are unsanforized.

Ahh, sorry, I had no idea that Self Edge sold mostly sub-par jeans. Duly noted.

i think you go around hating on everything. you must have like a lifetime supply of haterade in your fridge. probably collecting unemployment as well.

He is a douche: http://www.google.com/#sclient=psy&hl=en&q=Herr+Doktor+Professor+Deth+Ve…

I’m fortunate enough to work in a satisfying, creative job that feels good. My goal is not to work merely for money’s sake. That being said, you have a store in the middle of the mission where you walk in with $700 and come out with one pair of jeans and one 100% cotton flannel shirt, and it’s not ok to disagree with that or even to make fun of it? And we’re supposed to believe that this is a store who’s clientele is mostly “dishwashers, barbacks, messengers”, and other blue collar guys? Just be honest with what it is: A High End Boutique.Name ten dishwashers who have bought anything there. Ok, five.

Awww, you say the sweetest things.

I also hate puppies and often can be seen about town kicking children.

baha. i went to the levis store in LA a few years ago and was trying on a pair of $600 jeans..(for fun only..im mexican..everyone knows i cant afford that shit, i’d just steal em) and the prissy bitch behind the counter gave me a crash course on jeans 101…apparently you cant wash them EVER..or dry clean them..or do anything besides wear them and pray to god you dont spill your four loko…

or if you do..you betta be drinking that nasty blue one so it matches.

I wash my jeans every third time I wear them. I only have one pair of jeans, but only about 4 pairs of pants, so … . I’m too bored to do the math.

I used to just buy whatever (at Goodwill) but got burned by too many “dry clean only” items. Now I make sure that the washing instructions are as lenient as possible before I spend even $7 on a pair of pants.

This is all bullshit marketing being fed to consumers and was started by Nudie Jeans from Sweden.
All 100% cotton jeans, as they should be, can be washed as often as you like and actually washing them lengthens their lifespan.
Not washing your jeans will make them fall apart faster because the cotton fibers within the weft yarns become brittle over time.

Also, to the guy above that said he doesn’t wash his jeans because he doesn’t want them to fade… washing doesn’t crock indigo, wearing does.

You are absolutely correct. As clothes (including jeans: Denim Is Not Magical) get dirty, the fibres wear more heavily.

I don’t know much about Nudies, but Levi’s has likely sold unsanforized denim for decades before Nudies even existed. All jeans used to be sold this way, so saying that it’s BS marketing is just stupid.

Of course you can wash them (did anyone ever say you couldn’t?) But washing them comes at the risk of them shrinking til they’re too small and it mostly certainly does fade them. You may be right about the yarns ( I wouldn’t know), but all you have to do to know that they fade is soak them for a few minutes and notice all the dye that’s come off. This is why Levi’s recommends being careful with new 501 STF’s, because you can ruin furniture if you wear them while wet.

It seems like every documentary and travel program that you see shows people all over the world washing clothes; at the edge of malarial lakes, crocodile-infested rivers, or stagnant brown pools of crap. Then you train the cameras on San Francisco, and the first thing that hordes of hipsters do when they abandon their trailer parks is to boycott washing and try to make it fashionable.

Well of COURSE those people washing clothes in rivers are poverty-stricken; they’ve succumbed to the cleanliness industrial complex. I bet they spend over 80% of their GDP on Tide.

People have worn unwashed Levi’s for decades. It’s only a new idea to children, because they don’t know better.

Heat from drying in the dryer and the lint being pulled away by the scraping edges of the lint filter = damage to your clothes. All of them. Don’t get me started on waste of energy where there’s dry air and sunshine out there.

Washing damage depends on several things. In general, use cold water and less/gentler detergent.
YES, washing even in cold with NO detergent does, over time, fade the color and works the fibers to breaking more. But not nearly as much as the dryer does.
Seriously though, unless you actually get dirty (which I hope you do) or spill something on them (which I hope you don’t unless it’s funny or salsa) you don’t need to wash your pants every time you wear them. Try every 4 at most. Unless you’re not wearing underwear, then yeah, please, wash your damn pants. Or at least wear them in the shower.

The freezer thing works, actually, for BO. I use it for dry-clean only clothes all the time. But it doesn’t work if your Levi’s smell like Chee-Toes because you can be bothered with a napkin. (Hint: Use your socks. No one see them.)

Myself: I wash my jeans when they have actual dirt on them. That is all. Sometimes that’s one day of wearing. Sometimes it’s 6 months. Depends on which jeans, actually. My super-black Hugo Boss jeans that make my ass look so good? Washed 4 times in 3 years. I don’t wear them a lot and I do not want them to fade AT ALL. They have been frozen several times. They have been hand washed twice. They have never seen the inside of a dryer. And they look as new as the day I bought them.

I like boys don’t care about clothes( or do a good job pretending) and wear their clothes out like cowboys and farmers used to. Anyways that’s how you would get that coveted whiskering that some people are paying 300.00 dollars for. Also bragging about how much you payed for your jeans, clothes or what ever is really tacky. Style comes from your personality,and how you wear your clothes-not how they wear you. Do some work out side and get some elbow grease all over yourself, now that’s sexy!x

I don’t EVER wash my jeans, and they look great! Jeans look better the dirtier they are.

Well, no. Not unless you wear your jacket directly against your skin without a shirt underneath it. At which point, I would suggest, it stops being a “jacket” and becomes a “shirt”.

I agree that the dirtier jeans bcome the better the look. I never wash mine

Been wearing domestically-produced, **cheap**, raw-denim work jeans for some time now. Yes, I look like a militia-man, but it works for my particular idiom. I find that between the freezer and having a few pairs with which to rotate, I can keep the odor down. My next experiment will be to buy 3 identical pairs, and treat each one different….the “never-wash” pair, the “hand-wash inside-out in cold water as-needed and drip dry” pair, and the “wash/dry frequently like Dad does” pair, to see what the different results are….

PS- I think it’s worth noting that jeans really ought to be cheap. Paying over $100 for some cotton that’s been dyed/stitched by slaves and machines on the opposite side of the globe makes very little sense.