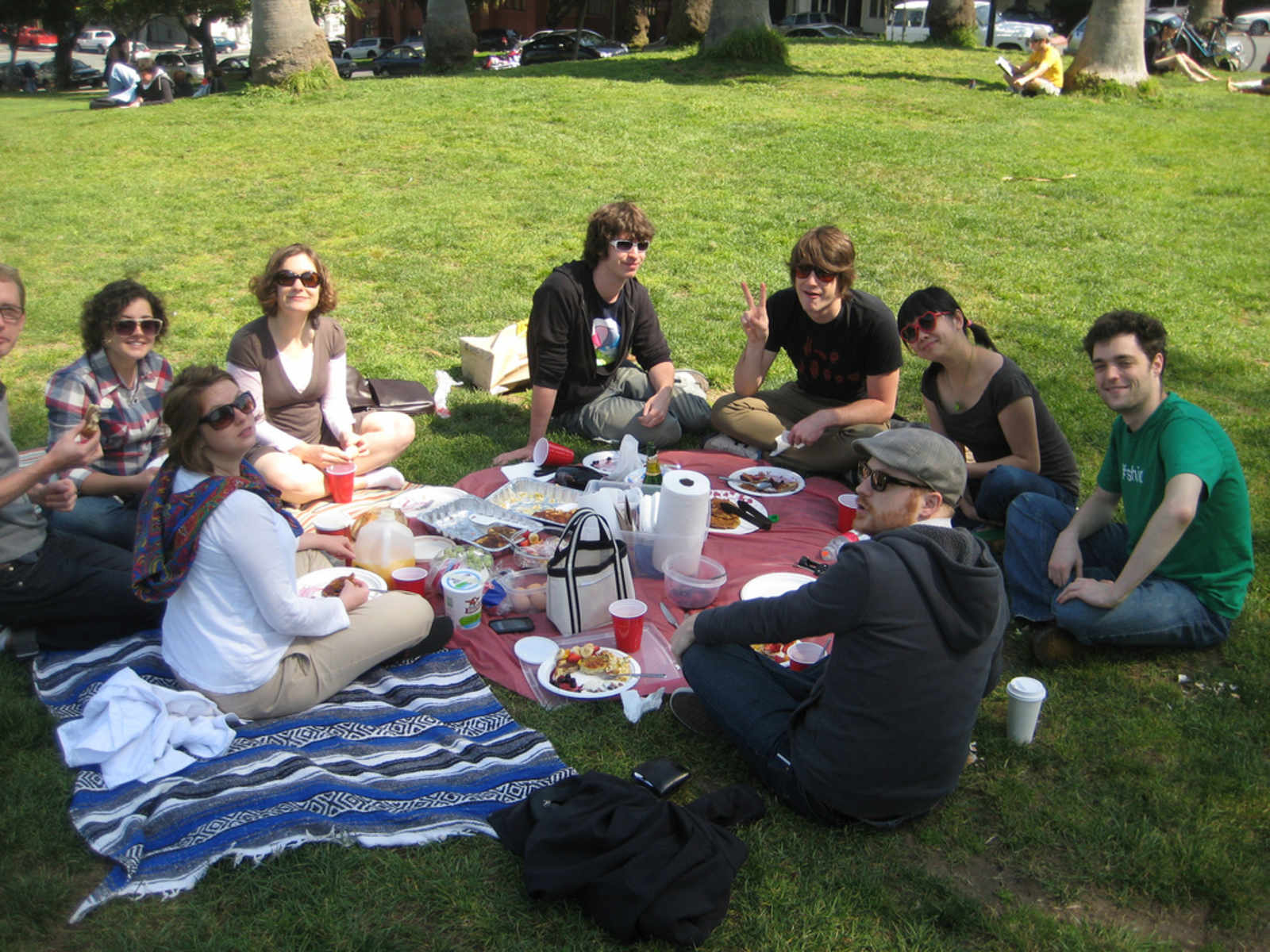 UPDATE: Much of the ambiguity surrounding what is a “picnic” that was discussed in this post has been cleared up by Rec. and Park.

Fresh for the 2011 park-going season, SF's Department of Recreation and Parks has decided to start charging a $100 “performance bond” to all Dolores Park picnickers.  While I struggled to get anyone on the phone to tell us more about this deposit, an employee for the Permits and Reservations office confirmed that the deposit is in fact “quite new” and is a “security deposit that will be refunded [after the picnic] if everyone behaves.”

From Rec. & Parks' Dolores Park Picnic Application that was created this past September:

All picnics at Dolores Park will be required to provide a minimum of a $100 performance bond to ensure that all rules are followed. You may pay the bond either by charging it on your credit card or writing a personal check that we will return to you after the event if all rules are followed. The performance bond may be increased for certain events.

The application also explains the new push for picnic registration: “Due to over congestion at Dolores Park, the number and types of events have been limited. Applications for events at Dolores Park will be reviewed in total taking into account the overall impact on the neighborhood.”

And, of course, if you actually want to have a picnic in the park, you have to fill out an exhausting form describing the event.  Among the information the City is now asking of picnickers is to provide is the contact information of two picnic organizers, to “describe any musical instruments that might be played during your event even if not amplified,” and if you are “requesting permission to serve food or beverages” [emphasis added].

Now, beyond the fact the City is inquiring about my ukulele jam sessions and implying that they control my God-given right to both eat and distribute Humboldt Fog goat cheese gives me the chills, the fact they are now requiring people to pay a behavioral security deposit is totally fucked.  Is this some sort of collective punishment for protesting the privatization of the park?  Perhaps.  A way for the city to cash in on the park's popularity?  Likely.  Whatever their motivation, the undeniable reality is that this will have a chilling effect on lower-income neighbor's ability enjoy the park that over 1.3 million people a year visit.  Even though it is a security deposit, there are scores of people who just do not have a spare $100 lying around to let the city to hold onto for a month or more (they never specify how quickly the deposit must be returned).

Interestingly enough, the Department never once defines what a “picnic” is (all they define is that any gathering larger than 75 people is a “special event”).  We know that if you wish to use one of the picnic tables, you must register.  But at what point is laying out a blanket with friends considered a picnic?  5 people?  10 people?  15 people?  The presence of something purchased at Bi-Rite?  Most importantly, do my BFF and I need a permit to open a box of Triscuits?

What remains to be seen is how this policy will effect the police presence in the Park, especially given the complete ambiguity of their definition of “picnic.”  In past years, SFPD and park rangers would patrol the park but thankfully looked past BBQs, public drinking and unpermitted picnics.  However, now that the cash-strapped Parks department has the potential to earn money from park-goers breaking the rules, will they increase their policing?  We can only hope not.

Side note: none of the Park neighbors or activists that I spoke to had ever heard of this deposit.  A quick Google search indicates this deposit has never been discussed in any public City Hall meetings.

Note: On 1/11/11 at 3:45pm, I edited out all the instances of the word “fee” and replaced them with deposit, because apparently some people are too stupid to read the entire post.

is this a joke?

What’s the punishment for violating this rule? Can cops legally throw you out of public property?

Exactly when do you need to file a Special Event Application? Well, that depends on which of the two consecutive paragraphs you read. Should you follow the bolded section, which says it’s only events over 100 people? Or should you follow the underlined section, which says it’s any event over 75 people? Is there some style guide somewhere that says whether bolding or underlining is more important?

Scott Wiener is the new supervisor in the district that includes Dolores Park.

Write him at Scott.Weiner@sfgov.org, and reference:
1) the application at http://fs18.formsite.com/sfrpsurvey2/doloresapplication/index.html
2) the failure to conduct any public hearings on the fee
3) the arbitrariness of it
4) no indication of how it will be enforced
5) it’s fucked up, and
6) he needs to fix it

I don’t think this is real…this form is not hosted on an official city domain, there is no citation for this, and nothing about it on the parks and rec page.

Even if it were, the city is not trying to “cash in” city fees and taxes are used to pay for the stuff the city government does.

Ok people, stop panicking. This isn’t required for all picnics. Its just to make a reservation for a picnic space:

It says right here on the Park and Rec reservations page that the application is only necessary for the picnic tables you mentioned. Which is standard in GGP too. I doubt they’re going to be cracking down on blanket parties.

It says “picnic areas,” which are never defined, not “picnic tables.” Perhaps the areas are only the tables (they stenciled all the tables last summer saying reservations were required), but, again, it never defines what a picnic area is. I personally wouldn’t give that department an inch when in comes to ambiguity.

The article isn’t, but half the comments are clearly sarcastic. I think I should explain my thoughts on this more, because I left a lot out.

What bothers is me isn’t that they want people to register to picnic (for the benefit of the department, let’s say that to “picnic” is to have over 15 people specifically sitting at a picnic table), my issue is that they are taking a behavioral security deposit. A fee wouldn’t annoy me… that’s nothing new (GGpark does it, as do almost every state/national park). But a security deposit that you only get back if you “behaved” is just condescending. What is “behaving”? Do they send someone to the park to evaluate your picnic? Why don’t they define what you exactly have to do to get your deposit back?

Additionally, the “deposit” is almost double what you pay for a similar space in Golden Gate Park.

If they want to charge a fee to people using picnic tables, fine, do it. But to institute some parental security deposit is wrong. It’s not the government’s role to determine if you were “behaving” while eating sandwiches. We already have a perfectly capable police department to ticket picnickers for littering, drinking etc.

Given the quality of the “discussion” in this comment thread, and the general level of social/political engagement practiced by the people who are outraged, a little condescension seems appropriate.

That being said, I second the motion to write to Scott Wiener - let’s see if we can bait him into responding!

Well, it seems that once again, Park & Rec has forgotten how self-entitled we are. In protest, we should start leaving our 6-pack cartons and used containers of Bi-Rite hummus laying around and then whine about how dirty the park is.

This isn’t some personal attack on a sad bear and a tiny guitar. This must be a full out assault against the latino community for trashing the whole park during the birthday parties of their collectively prolific children. Or maybe the city is attacking the white kids who are actually contributing to society by buying consumable goods like Triscuts and high-priced healthy food from Bi-Rite. I cannot believe the city expects the public to use public property and not deface it. IT’S PUBLIC PROPERTY!! I HAVE THE RIGHT TO URINATE ON PALM TREES WHEN THE LINE IS TOO LONG OR I PLOPPED MY ASS DOWN TOO FAR AWAY!

That is so f’ed up, Scott Weiner, you and your city are downright unAmerican. Get out of my country, you commies, with your adding trashcans that still cannot contain the deluge of PBR and half-eaten Humboldt Fog. You, San Francisco (City and County of), obviously have way too much money. This attack on law-abiding consumer americans will obviously rake in millions from park picnickers. Are you trying to fund your ridiculous communist city healthcare on the backs of the innocent, whom surely have never left a mess in Dolores Park?

I mean, I only vomited on the bench once, and really it was more like behind the bench. And Johnny said he grabbed the beer bottles, cause I think the cheapass collects the bottle redemption. And the boat was totally already mostly broken, so it was bound to happen.

Don your best black and red and join me to ride to save the Park for the latinos and consumer Americans who never even got a chance to weigh in on this in a public hearing, cause I totally would have heard about it.

I emailed Rep. Weiner about this and he clarifies:
“As I understand it, no fee or deposit applies if the picnic is up to 25 people and doesn’t use a picnic table. “

We should all move to Germany, where it’s perfectly legal to drink alcohol in public.

Mr. Eric Sir , now maybe you understand how the Parks and Rec are really out to screw with everyone for money/deposit/fee.. remember the whole ‘trailers in the park’ business a few months back that you were all for?
Now you are bummed when the Parks and Rec does something that effects you.
Hope you have been educating yourself on ‘the plan’ of Parks and Rec and not just whine when things involve you.. I think you would then refer to yourself as, what have you called others… NIMBY.

This is so funny I can’t stop laughing. Don’t mess with the man, or they’ll boot your fixed gear and put a tax on mustache wax.

Please don’t flame your supervisor unless you have all of the facts and know what the hell you’re talking about.

KevMo, you really could do something productive with this blog. But clearly that notion is well beyond you.

Where did I ever call this a fee? The first paragraph explicitly says it is a security deposit. My apologies if you are too stupid to read the post before commenting.

This is a ridiculously bad piece of “journalism”. The amount of inaccurate information you just posted on the web is astounding, and actually pretty scary, considering you are the “editor” of this blog.

Going to give examples or just troll?

This effects the disabled more than the able bodied
An able bodied group could forego the fee (until it is returned it is a fee) by sitting on the ground.
A disabled group or a group with a disabled member (ie: person who needs a table) would have to go through extra steps.
This effects the poor in a disproportionate way as well.
If a group wishes to use the public tables they must fork over money that they may or may not have.
This may seem minor to many, but the discrimination speaks volumes.

they could make more money fining people for littering in DP, and yes, tossing your cig butts into the grass and leaving all your frakking trash behind after you leave is littering….