Is Santacon "The New Bay to Breakers"? 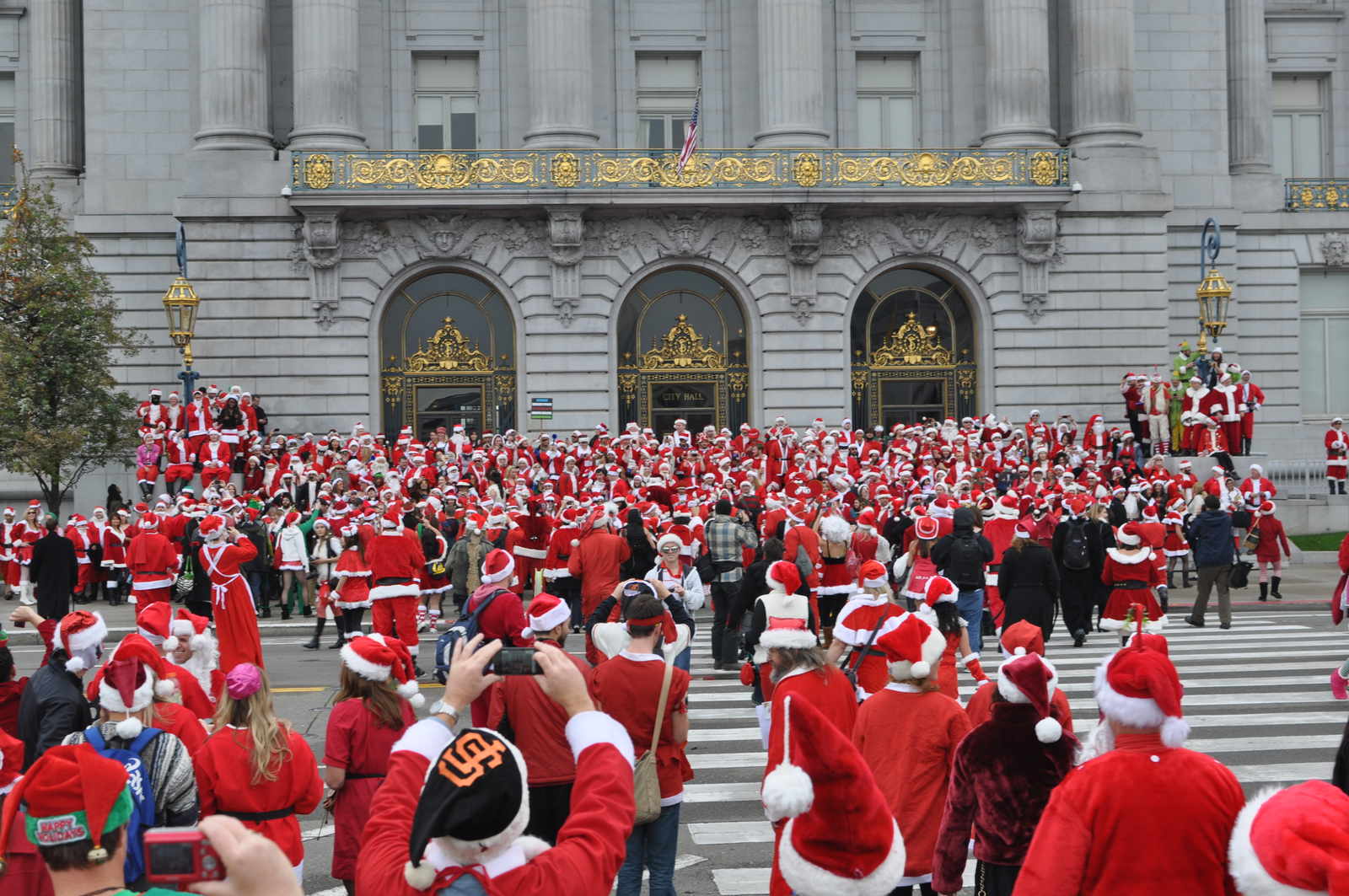 As I paced around Civic Center searching for a place to discharge all the whiskey in my bladder, I overheard a Santa, clutching his treasured Bud Light Lime, joyfully exclaim, “This is the new Bay to Breakers.”

Perhaps this costumed connoisseur of fine beverages is onto something.  After all, B2B is once again under pressure to 'rein it in' and have vowed that there will be no alcohol at the 2011 race.  Maybe this is the new event in which the Mission, the Marina, and Livermore can come together for an afternoon of costumed intoxication?  The events certainly are becoming similar.  Let me submit the following into evidence: 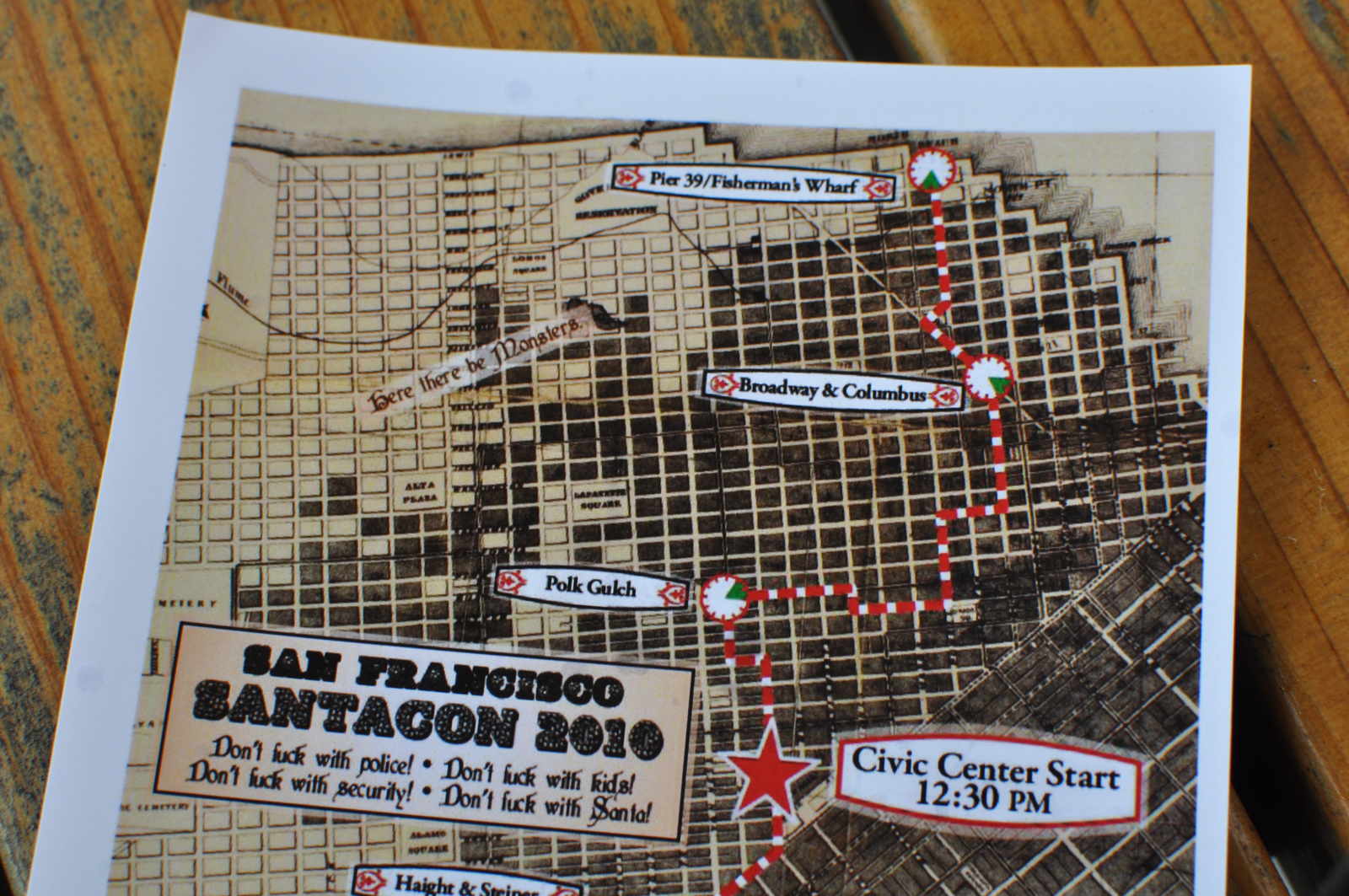 THE ROUTE: Much like Bay to Breakers, Santacon follows an established route.  However, unlike the silly bastards that organize B2B, the anarchic masterminds behind Santarchy have split up the race to the bottom into three courses, thus reducing the chances that NIMBYs will get angry at the crowds by 66%.

BONUS: Santa has cemented itself as one of the San Francisco community events that have made some sort of public declaration that C.H.U.D.s live in the Marina/Japantown, thus earn the event “props” from the other 85% of the city.  Excellent PR move. 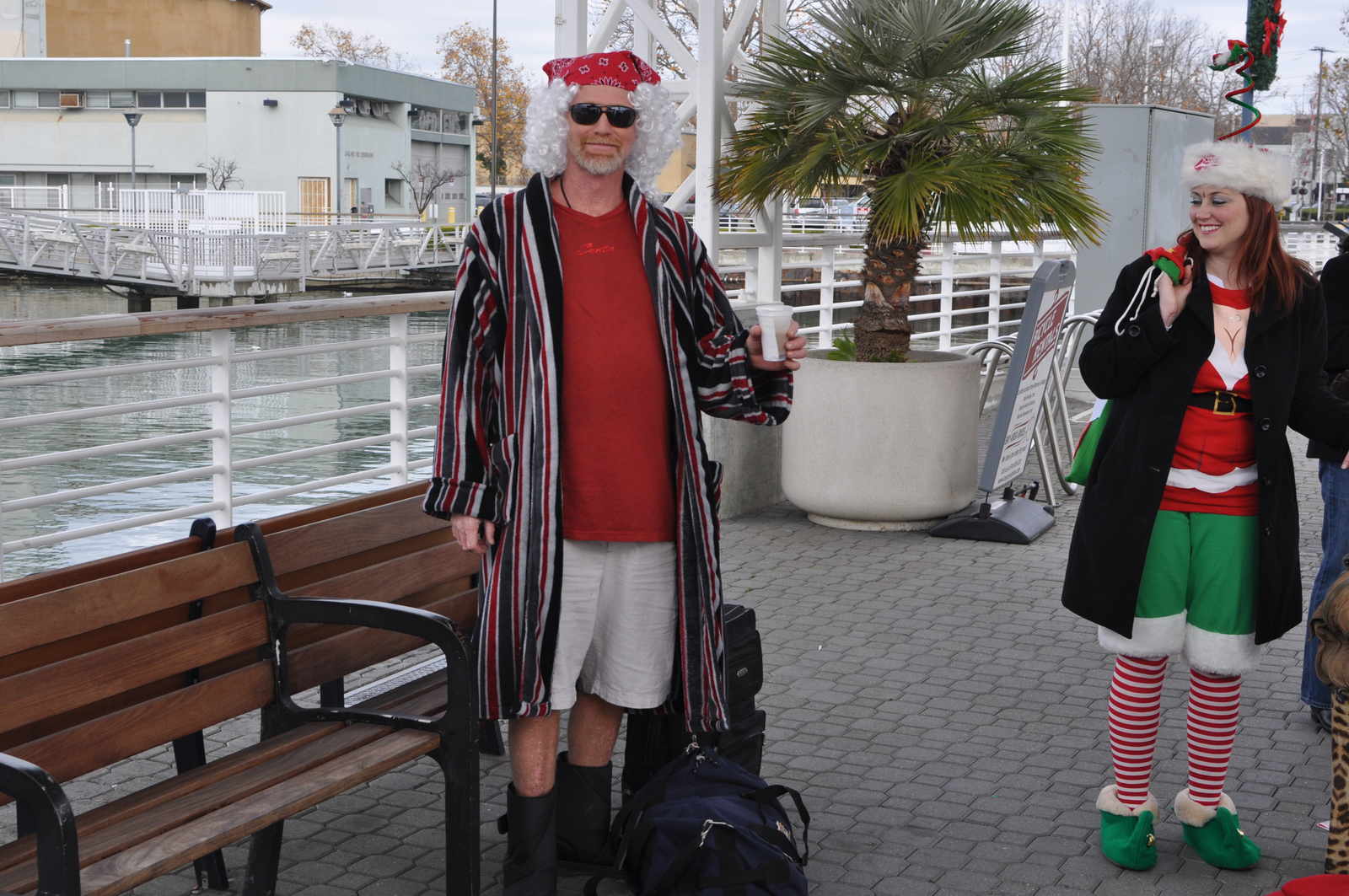 THE COSTUMES: Just as Bay to Breakers has moved beyond the simple running outfit, Santa no longer views the simple Santa suit as adequate.  As The Dude, caucasian in hand, and the costumed individuals photographed below show, Santacon is has transcended beyond the “Santa suit pub crawl” image to a full-on costumed adventure. 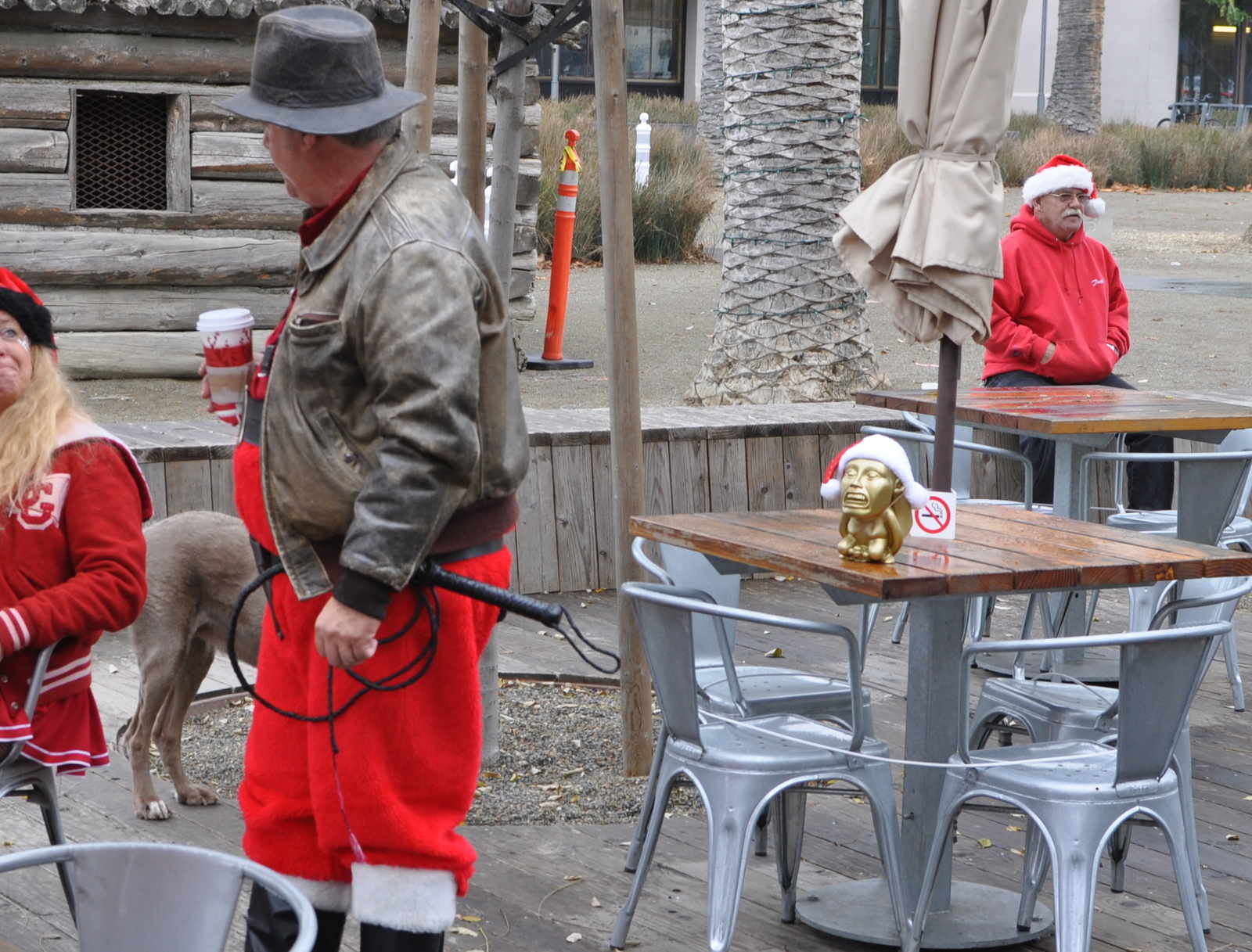 COSTUMES: Indiana Jones Santa demonstrates how the use of props can bring your Santacon experience to the next level. 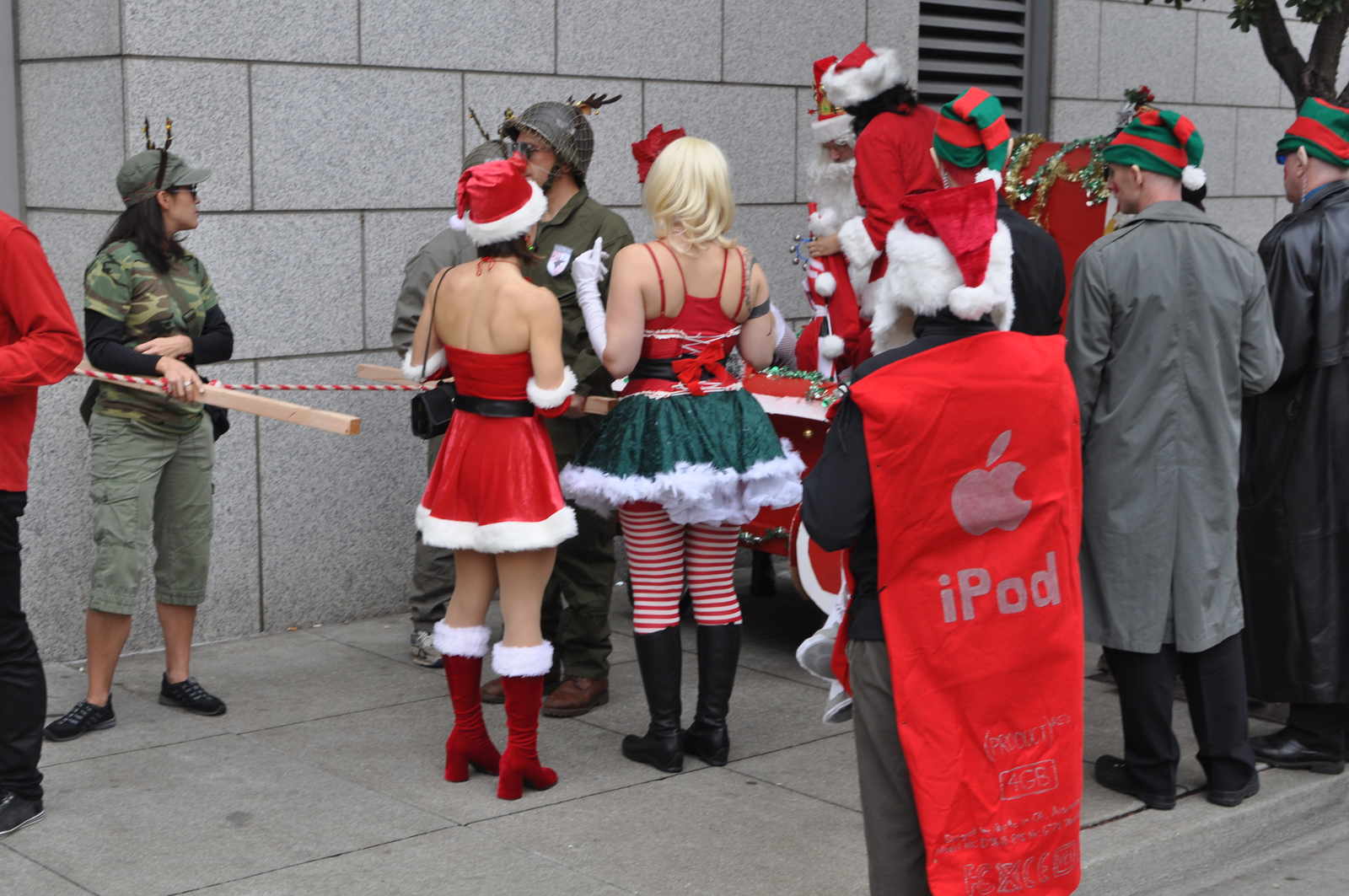 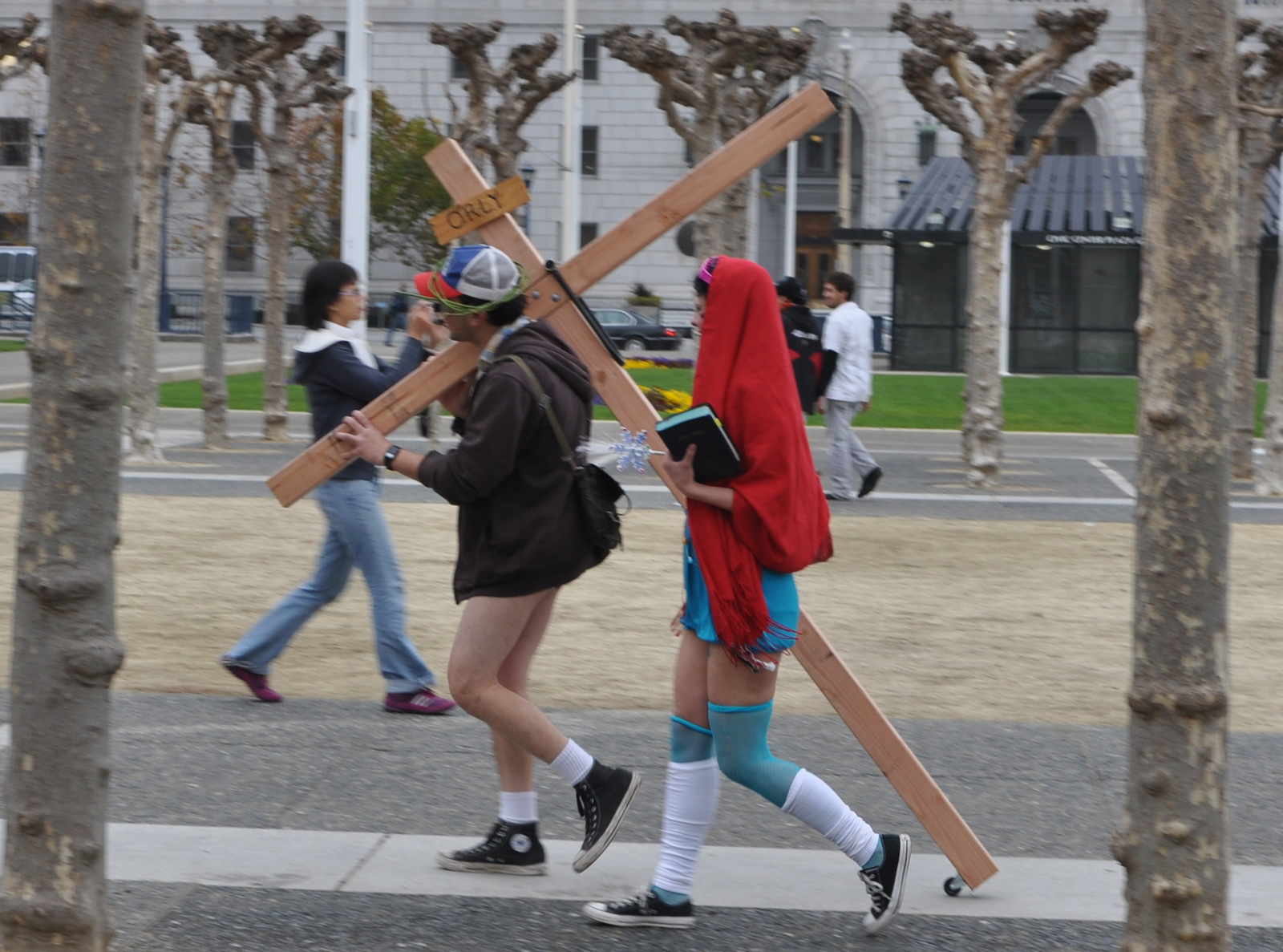 COSTUMES: Chuck Taylor and PBR trucker hat Jesus speaks volumes.  For lazy Santas, merely wearing what you would ordinarily wear, only pantless and pulling a cross, will suffice. 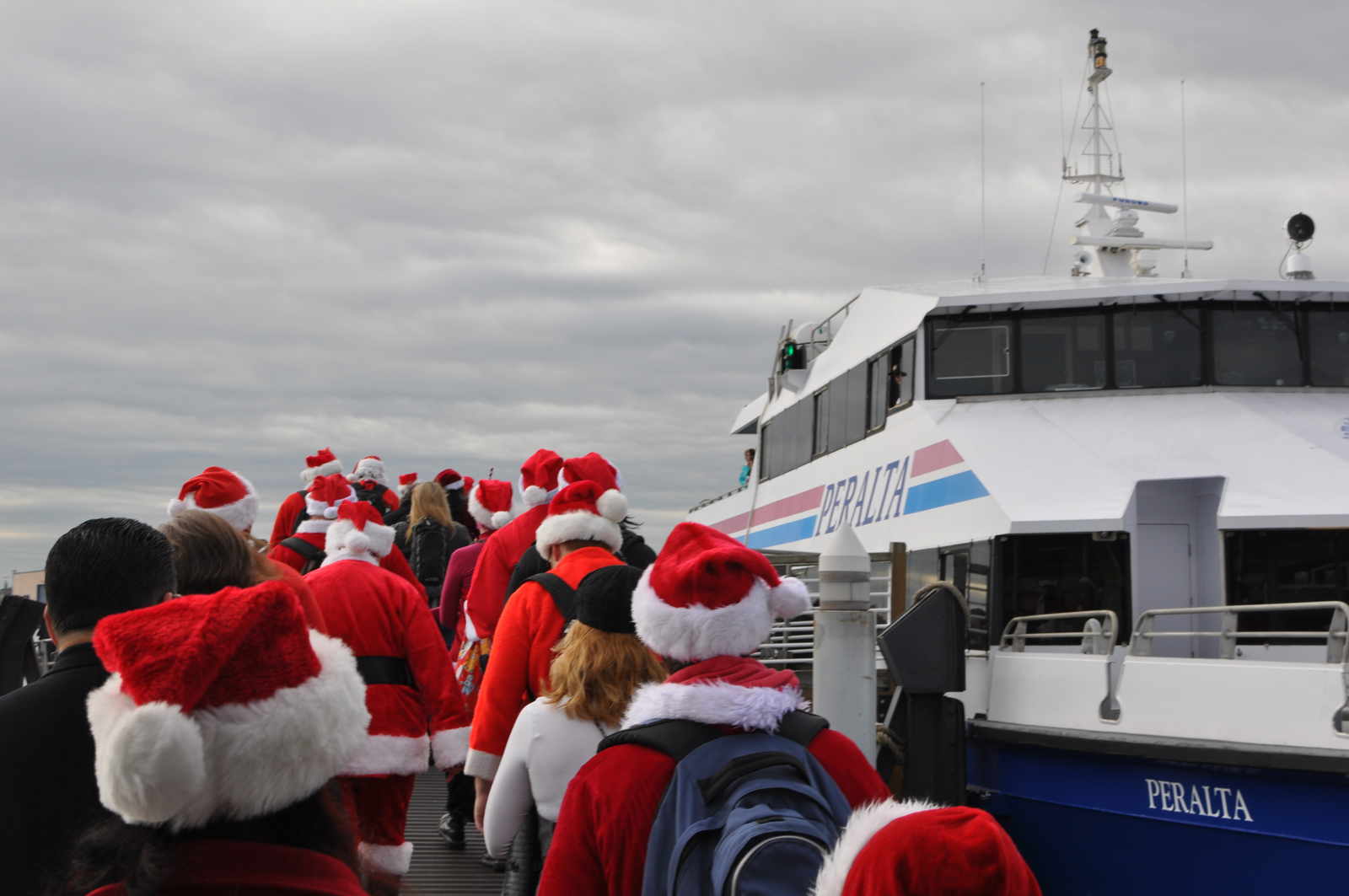 THE FLOATS: Just like B2B, floats are only increasing in presence during Santacon.  Sure, the Oakland-SF Ferry might be more of a literal float than some Jersey Shore-themed travesty, but this year's Polk St. parade of flannel had some of those as well: 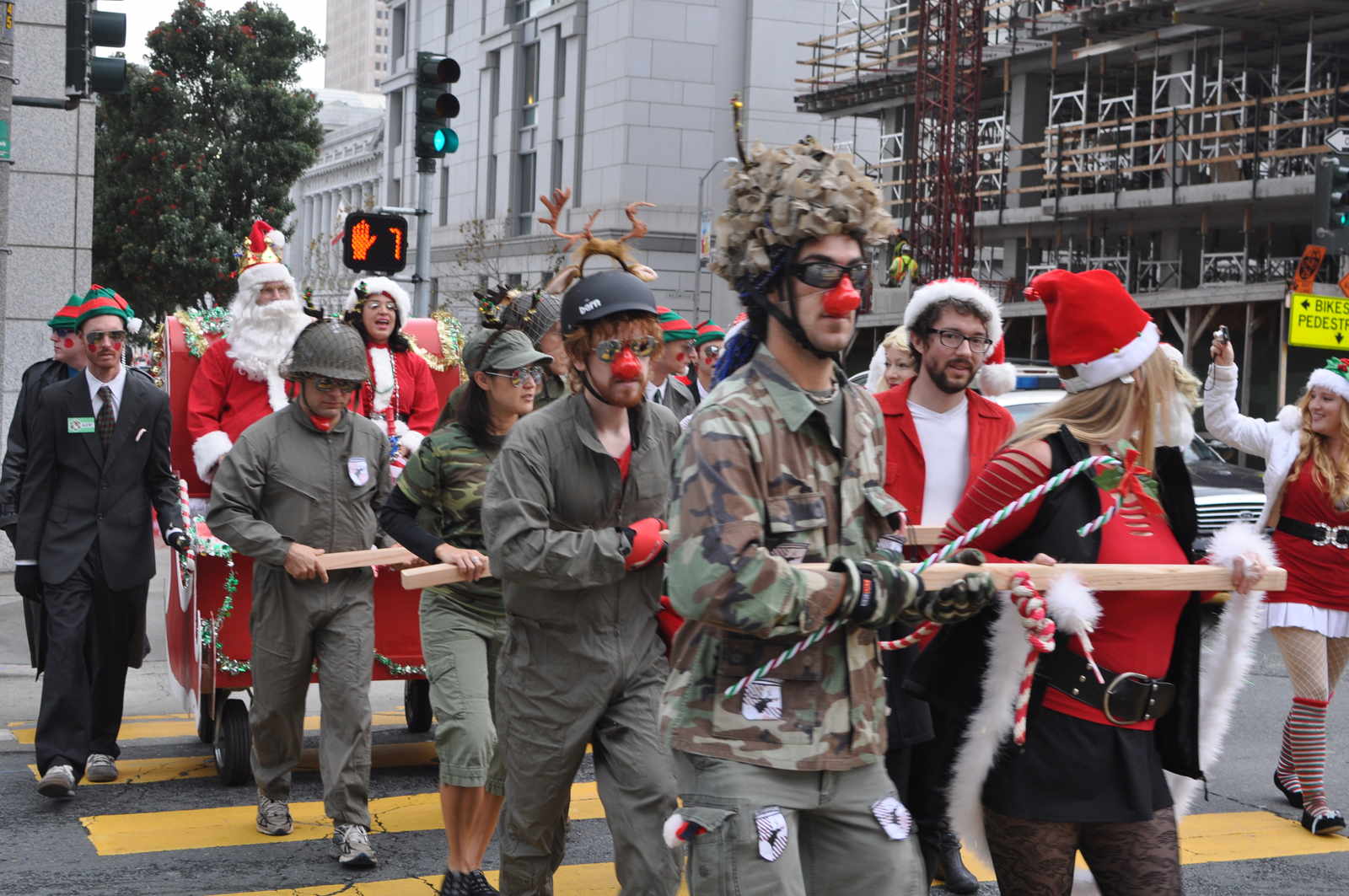 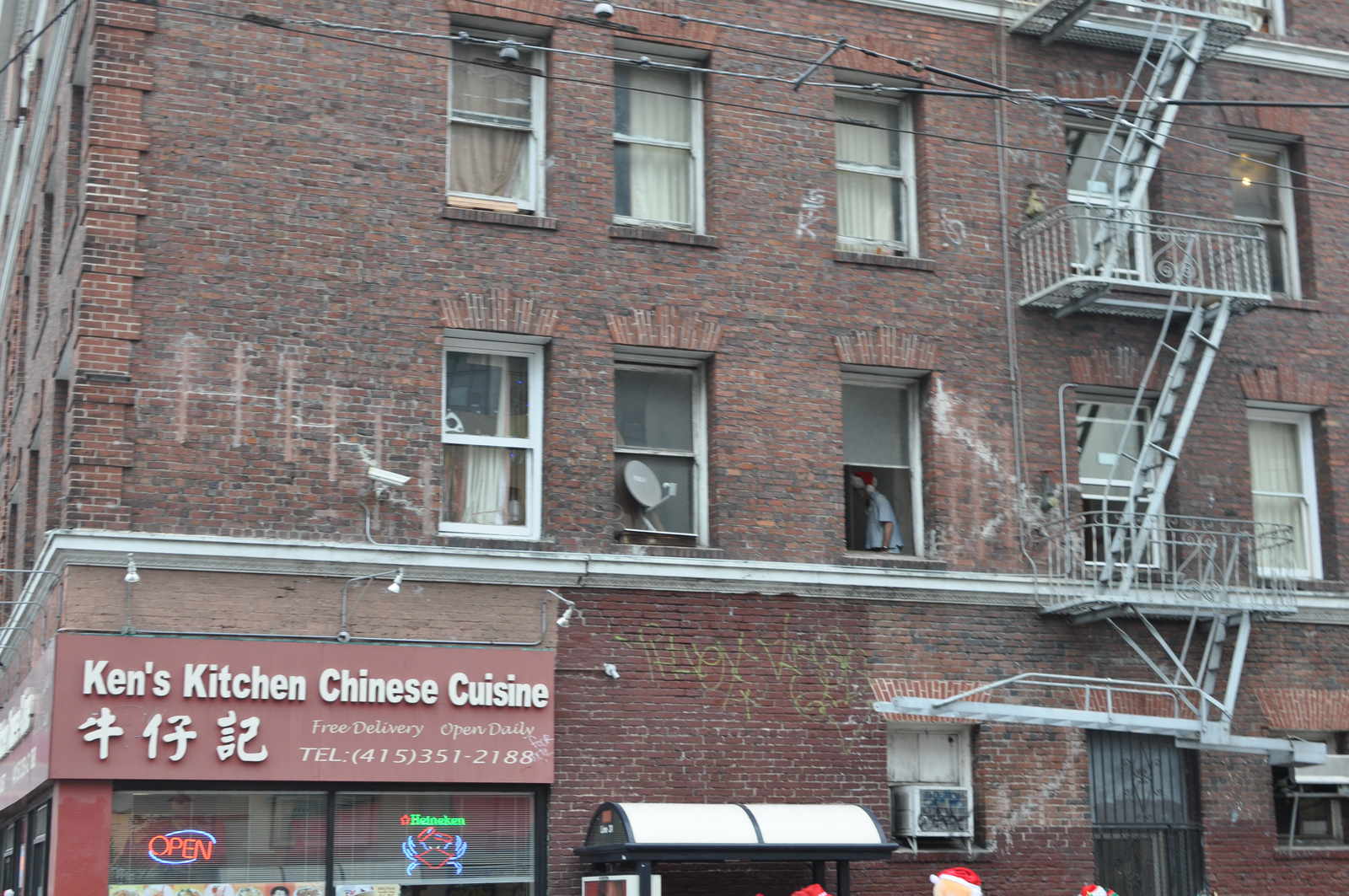 INTERESTED ON-LOOKERS: Just as B2B has necessitated a demand for stoop and rooftop parties along the route, Santacon has grown into such a spectacle that even crackheads don their Santa hats and peer out the windows of their SROs. 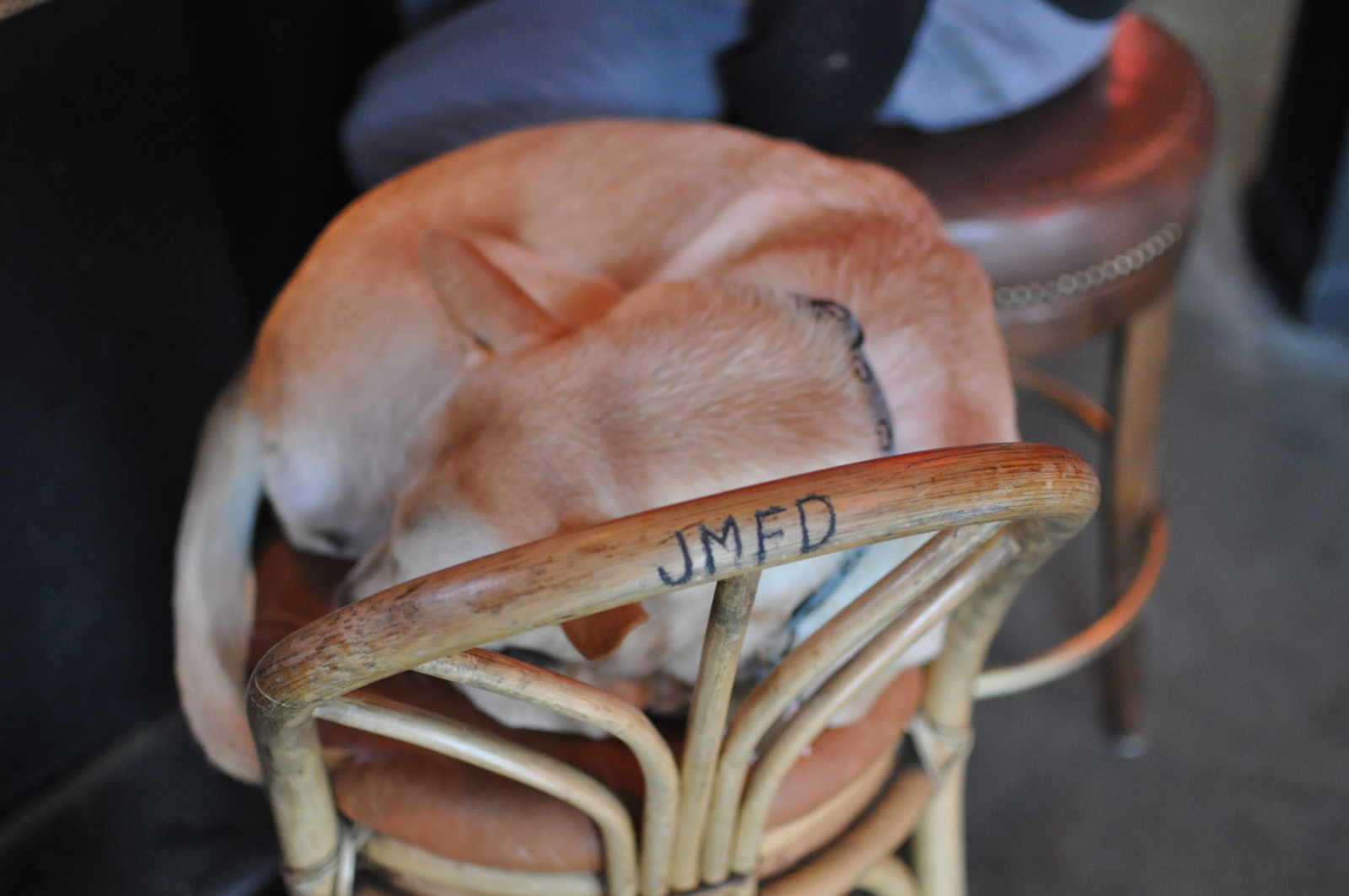 DISINTERESTED ON-LOOKERS: Much like B2B has a crowd of neighbors who roll their eyes at the antics going on around them, Molotov's had this dog who was contently sleeping as 50+ Santas guzzled shots and pints of PBR.

BADASS DUDES WITH AWESOME MUSTACHES THAT LOOK LIKE THEY KILL PEOPLE IN ROBERT RODRIGUEZ MOVIES: Word. 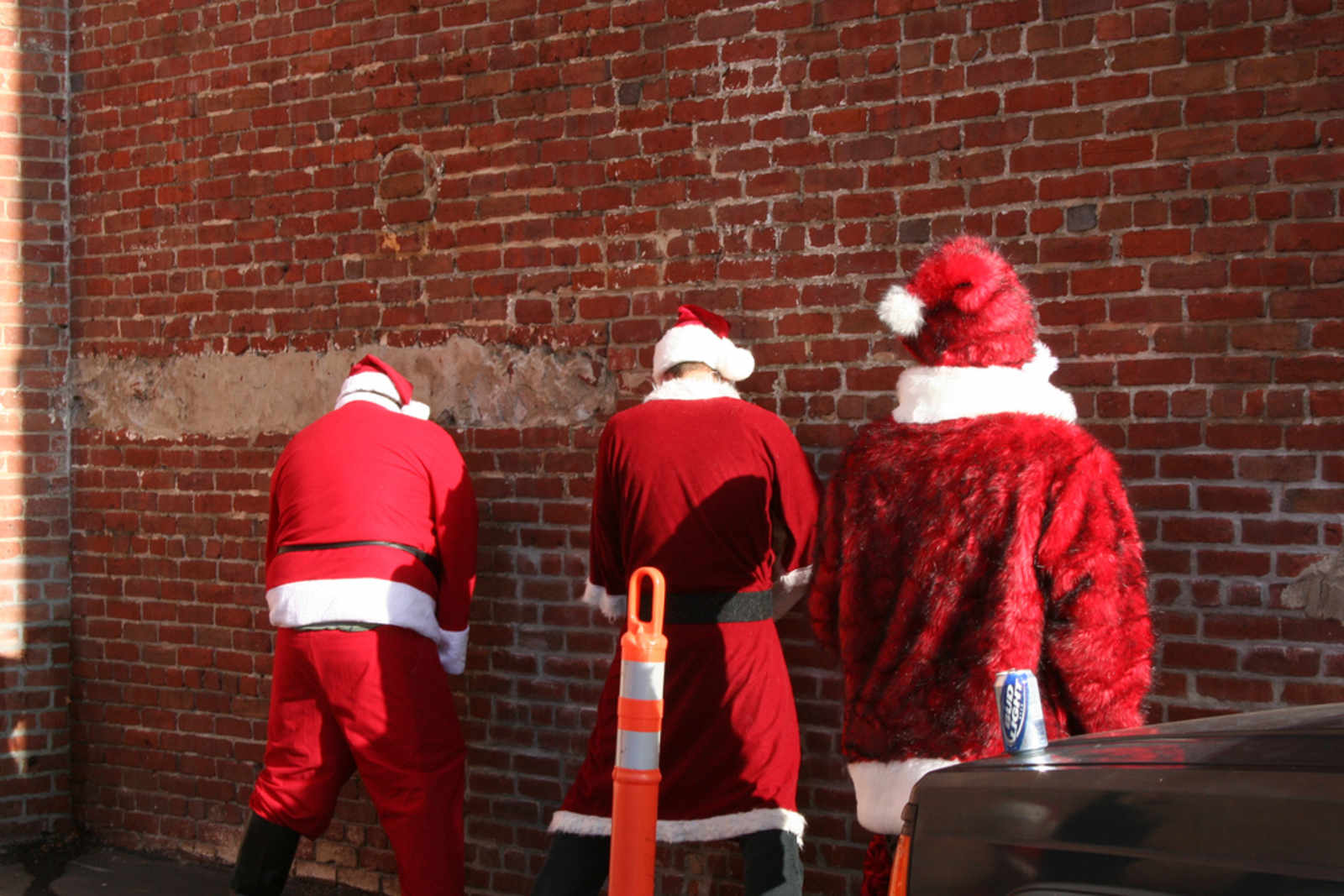 NO WHERE TO PEE: As Kasey Smith documented, Santa also has to pee on buildings.

RUNNING UPSTREAM: Similar to B2B's Salmon Run!, in which costumed salmon run the race backwards, the result of Santarchy 'going mainstream' was Bananarchy.  Bananarchy, as you might have guessed, involves a bunch of hooligans in banana costumes running the wrong way through a crowd of Santas yelling silly stuff like “BANANAS OF THE WORLD, UNITE!”

What's the verdict?  Compared to previous Santacons I've been to, the 2010 edition seemed to involve more brown bags from bodegas and walking from neighborhood to neighborhood than hanging out in bars.  Then again, that might be because of the nice weather and the fact that the recession has made us all more broke-ass.  Ultimately thought, it doesn't matter if Santacon has “replaced” B2B; this town will just take any excuse it can get to barf its way through the Western Addition.

Is that Wilford Brimley Santa in the background of the Indiana Jones Santa picture?

Wut!? No Macy’s invasion? And Macy’s is asking for it for firing Santa John too. I am disappoint. Glad to see Santa’s Secret Service still there and with reindeer soldiers too.

Perhaps Santas should storm the Marina this July 4. Then again, I know disgruntled bartenders who would like to see Santacon disappear altogether.

The pee picture.. that’s 2 or 3 santacon’s ago in Oakland. And the photographer is the hipster Mary y’all are cappin’ on in the Jesus pic. Those costumes were far from lazy. I mean, going shop class on that cross and all…

The sensationalist title of this article will probably garner you many hits, and the tongue-in-cheek content is cute, but in reality, the two events have very little in common.

The problem is one has the potential to become much like the other. Santa needs to pee and peeing on the streets and in people’s neighborhoods doesn’t make for good PR. That aside, Santa is WAY more ruly than B2B has been over the past few years. Let’s hope that Santacon doesn’t become remotely as popular or asinine as B2B. If it does, we’ll all have to (once again) find something different to do that hasn’t gone to the suck.