Noisebridge, SF's Only Hackerspace, Could Be Forced to Close 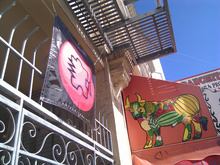 Bad news guys: Noisebridge, the collective hackerspace on Mission Street that provides a venue for people to collaborate on technical projects and hold classes/meetings, could be closing its doors come February.  Like many of the treasures in this town, Noisebridge is officially broke-ass and cannot pay rent.  The gist of their woes is that over the summer, the non-profit space was actually turning a profit, but they have slowly lost members and donations since then.  Now they're only taking in $2,500 a month, but having to spend nearly double that on rent and utilities.

Losing such a unique space would be one helluva bummer.  Not only is it the only public space to mess around with electronics, but pretty much anyone can walk in and use their wifi without having the buy an overpriced coffee and deal with sketchy coffee shop internet while some old dude tries to talk to you about Mad Men (don't ask).  Plus, they have a tea room, a swanky Big Bird mannequin, a robot wheelchair, refrigerator full of circuitry, and even an art wall.  It's basically as close to a 20-something Disneyland as Mission St. gets.

Donated $200. Now I feel like a fucking valid citizen. It’s a wonderful time of year.

I’d only donate if they promise to get rid of the stench of decaying rats with a bad case of BO.

You might want to ask them WHY they’ve been losing members.

It’s important to note that the bull depicted in the photo above has a leek for a dick.

This comment is more insightful and useful than Noisebridge is.

so how many nights left are there to be able to crash at noisebridge, official homeless hacker crashpad of sf?

What? The Tonga Room rules. I don’t mind paying for their admittedly overpriced cocktails. The decor and ambience alone make it more than a bargain.

Agreed. Two of those $12 pineapples will FUCK ME UP. And what’s that equivalent to, like 3 beers and two shots of Fernet at 500 Club … does 500 Club have fake thunder and lightning and a boat in the middle of a pool with a funk band playing on it? Nope, and no pineapples either.

According to our Treasurer’s report today:
“Our aggregate bank balance is $14,025.46 after paying January’s rent, which puts us very close to our target prudent reserve of $15,000. Thanks to everyone who donated!”

Thanks so much for helping spread the awareness of a place like Noisebridge. It can only keep going with the help of a strong community!

As of last night’s weekly meeting, Noisebridge now has over $16k in funds after January expenses. We are now back to having roughly three months’ expenses in reserve. Yay! Fear not.