In a cramped Oakland warehouse, covered in graffiti from floor to ceiling, a battle is raging.  The air is thick with [medical] marijuana smoke while onlookers guzzle 40oz's in anticipation, their minds already warped from the sideshow freaks and heavy metal bands that opened the evening's festivities.  The microphone chirps as the announcers prattle off the next bout; “…Hoodslam is proud to present, Zombie Vinny Boutabi versus Gotho the Bi-Polar Clooooooown!!!”  What emerges from backstage is as absurd as it sounds and delivers the clown vs zombie gore-fest that the crowd has been waiting for.

This is not your average small time amateur pro-wrestling circuit.  This is as Oakland as it gets.  Hoodslam is a bizarre fusion of East Bay hipster, thug culture, metal and pro-wrestling with a sprinkling of sideshow freaks.  The story lines are insane; the characters surreal.  In the world of Hoodslam, zombies, cartoons and video game characters do battle against traditional luchador and WWE style wrestlers.  At the moment, the Street Fighter/CAPCOM characters reigning over Hoodslam with an iron fist of tyranny.  We're seriously talking about Ken and Ryu in the ring; I think that even MegaMan made a cameo at some point. 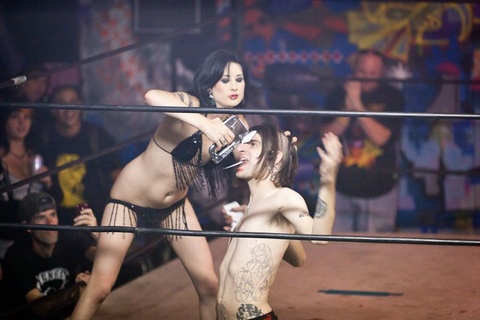 THE POINT: The aptly titled 'Hoodslam 2 FOURTH STRIKE: Tournament Edition 3D' is tomorrow.  And it's free for the last time.  This last show of the season promises to be a big one.  Ryu will fight a masked Luchador.  E Honda battles a guy in a banana costume.  The 'Stoner Bros' will be pitted in a tag-team match against Carmen San Diego and Where's Waldo.  Referee Pink Panther vs. Senior Official Winnie the Pooh.  It goes on and on (Facebook event details here).

So tomorrow at 8pm, make your way to the 'Victory Warehouse' at 24th and San Pablo in Oakland, for Hoodslam: “The only 420 friendly, b.y.o.beer, music, wrestling, entertainment event of its kind”.

Oh, and if you actually want to know more about this bat-shit insane plot, there's a ridiculous five minute video below that explains the background of the 'Capcom Wars' and previews this Saturday in painful detail.

Great write up…and hey, you even used my Capcom history video on here. Hope to see some new faces at Hoodslam tomorrow night, as we plan to put on a show you will never forget (unless you are too blacked out to remember) FTF

what the fuck, this sounds awesome

this is fucking awesome.

When you have fucking kids, hoodslam Oakland is the last thing on your mind.

If anyone still checks this article, although it’s dated, Hoodslam has since launched a website, which you can find at birdswillfall.com