The World According to San Francisco 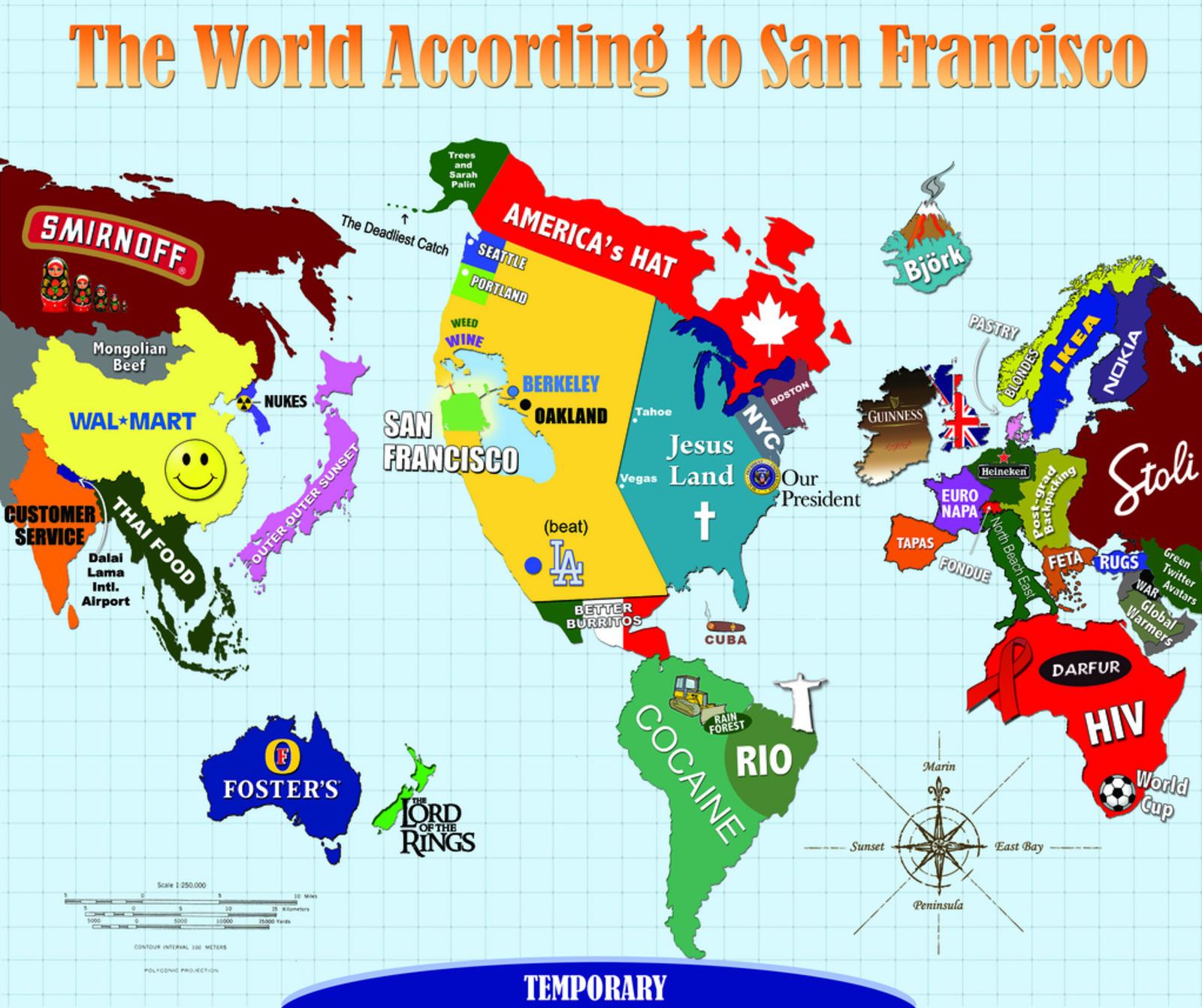 David sends us this map our way.  I'd say something snarky about it but, honestly, I think this is pretty much as close to perfect as you can get.

(no idea who authored it, but it was found on reddit) UPDATE: Generic made it!

I think generic made it, but why doesn’t reddit have a link back to his site?

(too tired to embed or clean up that link)

Homefries, you’re so new to the Information Superhighway, it hurts.

You’re not arguing with me, you’re arguing with Wikipedia. Not to mention everyone else. How many variations do you see there?

You can repay this insult with two pints of Ireland, cold. While I sip, you can review the history of this particular unit of internet humor. (Also: This was before. This was after, by me. See? Good clean fun.)

Someone else will take the SF version and run with it. Like @BruceC’s Israel-as-Palestine joke. Which? Is genius. Wish I’d thought of it. Some other great stuff like Italy represented entirely by a bottle of Fernet. Vancouver as “Back-up plan.”

I mean, “stealing other people’s jokes”? Seriously? Do you work for the RIAA or something? Does Creative Commons piss you off? Do you not lol at lolcats because “hey, someone else’s intellectual property!” I’m seriously asking.

Carlos Mencia steals money from the pockets of working comedians. If you can’t tell the difference between that thing and this thing, you’re on the wrong Internet.

ignore the haters. your map is money, and you know it Generic. this post has over 1k of fbook ‘recommendations’, that alone speaks for itself.

Then it’s a complete fail of a joke. For one, San Franciscans generally believe (incorrectly) that the best burritos are in the Mission (when in reality the burritos in San Diego are clearly superior). I’ve lived in the bay area for 12 years and have never once heard someone claim that there are better burritos in Mexico…or that there are burritos in Mexico at all for that matter. Furthermore, San Franciscans are generally regarded as “intellectual liberal elite types” who generally have an aire of superiority, SPECIFICALLY because they consider themselves worldly and cultured. So making fun of them for being ignorant about other countries makes no sense. In fact, in light of that, it pretty much renders this entire cartoon a complete fail. No typical SFer would EVER shop at Wal Mart. Duh.

While I’m at it, I might as well point out that even though the “outer outer sunset” joke is the funniest thing on there, it’s also wrong, since most Japanese people in SF don’t live in the Sunset. The Sunset is overwhelmingly populated by Chinese and Vietnamese.

I also like how the author totally rips off the “Jesus Land” joke. I’m pretty sure I first saw that on a t-shirt in Urban Outfitters in like 2001.

I agree with douchebag. This person clearly doesn’t actually know anything about San Francisco or its stereotypes.

I unironically love people who can get worked up by such innocuous jokes.

It’s like getting all suited up in Kevlar SWAT gear and then unloading unloading your gun into a hot fudge sundae.

Wow Hank. Fantastic observation! And Ireland is more than guiness and more people than Bjork live in iceland and and and. At least you’re a free floating turd in the punch bowl though.

The only thing missing is Israel labeled as “Palestine.”

1. In What way does this differ from the American view.
2. WOW! It seems San Franciscians are very well educated in where countries etc. lie. There used to be a program on the Dutch TV and one of the items is where are you now (these people are on holiday while they are asked this question) They would point to all parts of the world except where they were….. so again: I commend the San Franciscians on their knowlegde of Topography.

I don’t think the person who made this map has ever been to San Francisco. This looks more like the world according to Vallejo or something.

They also don’t know the difference between Dutch and Deutsch, apparently.

It took me way to long, but Pastry is so labeled because of the danish that we eat for breakfast. Hank, you’re far too educated and dull to find the humor in this. I’ve been to Amsterdam, and yes, lots of people in San Francisco think that Heinekin is a good German beer, when it is neither.

This is a joke about fellow San Franciscans, for the cynical “I know better” types to enjoy.

I think WillieWatson should go home for a while to enjoy real American jokes.(lol)