New owners of Pabst are spoiled East Coast douchebros; Kid Rock could have been PBR spokesman 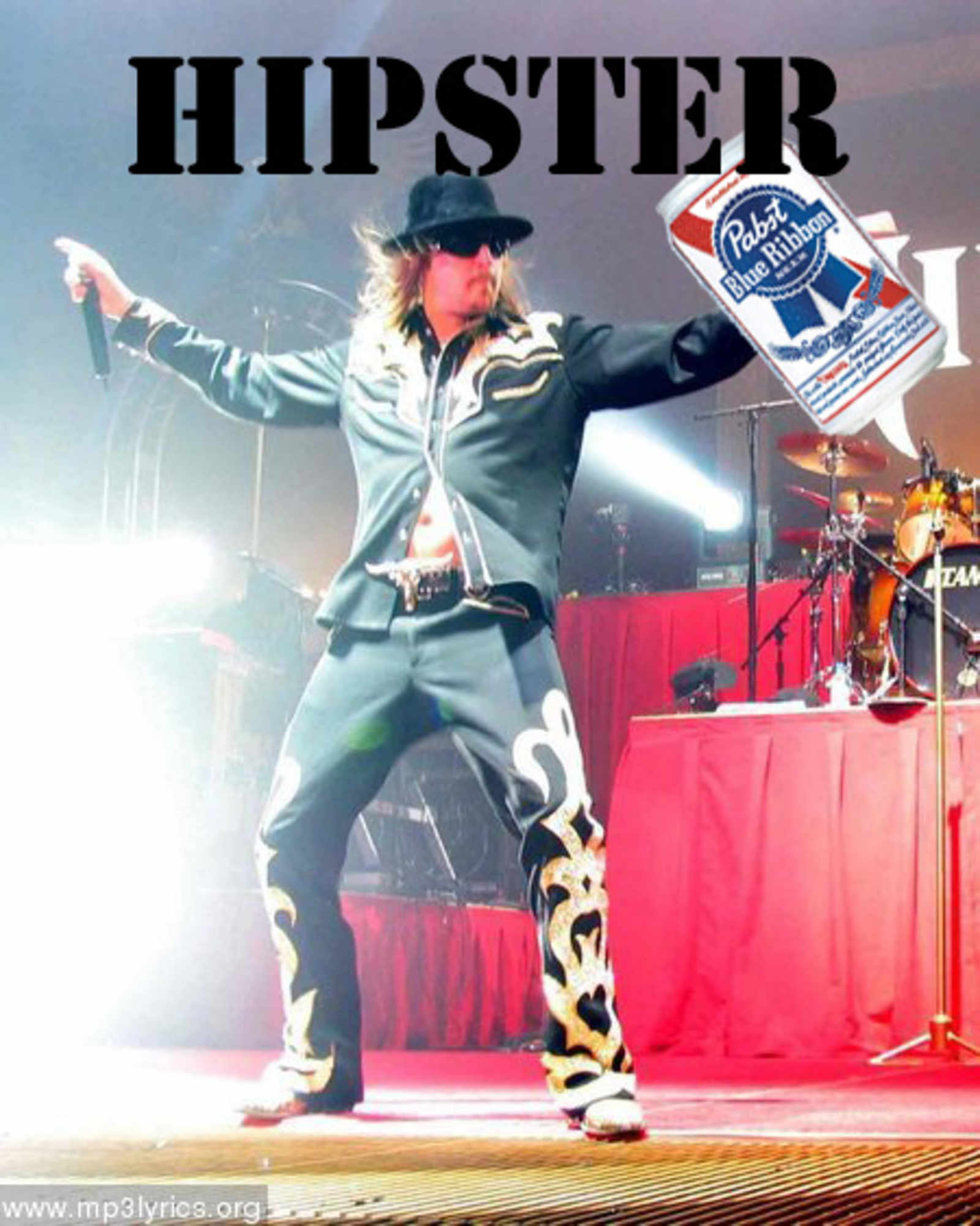 In the last month a grip of new info has popped up on the interwebs and shed new light on the bizzare branding machine behind Pabst Brewing; giving us a glimpse at what could have been and a taste of what's to come for the PBR brand.  As previously reported, Pabst Brewing was very recently acquired by brand-mogul/dread-pirate C. Dean Metropoulos for a cool $250 million.  Papa Metropoulos then gifted the company to his two sons, Evan and Daren, cause like all twenty-somethings these days they desperately needed a job. In my previous post, I questioned whether the change in ownership would cause PBR to 'go (even more) mainstream.'  If the recent article on Evan and Daren in Bloomberg Businessweek is any indication, the answer is a resounding yes.

Let's get the character assassination out of the way first so we can move on to the more pressing matters at hand (like 'BAWITADBA!!! WHY IN THE FUCK IS THERE A PICTURE OF KID ROCK IN THIS POST???' My thoughts exactly, friend).  The Metropoulos Bros are some spoiled ass New England raised douchetards, who are about as far from both hipster and blue collar (the demographics that keep PBR profitable) as they could possibly be.  To start, the MetroBros met with Matt Schwartz of Bloomberg Businessweek in the 35th floor lounge of the Mandarin Orientel in Midtown Manhattan, where he remarked that the Bros “were very much at home.”  Schwartz goes on to mention that they had just come from a friend's wedding at Martha's Vineyard, MA, where the MetroBros had “summered since they were boys.” 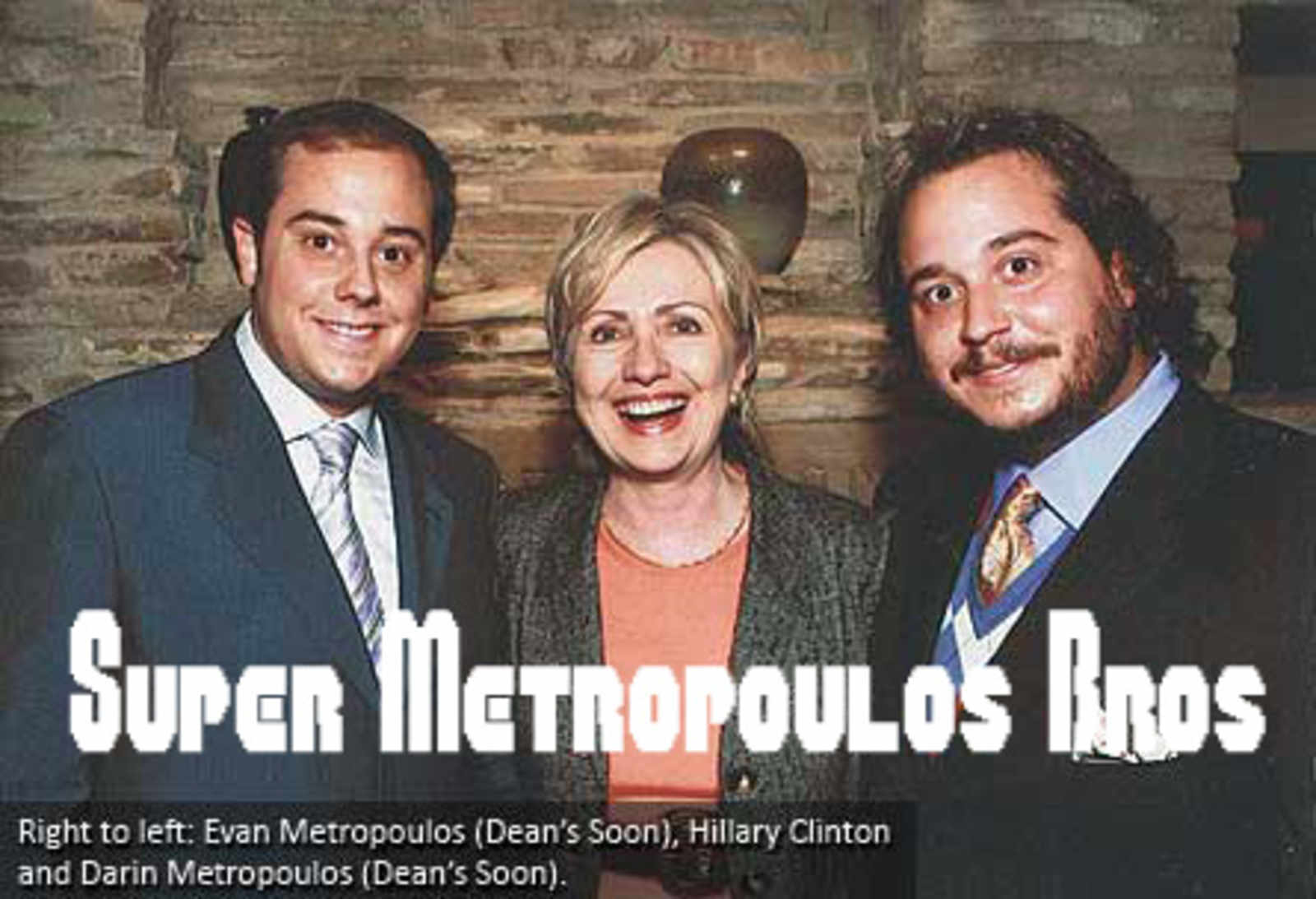 Daren & Evan Metropoulos hanging out with Katie Couric's mom in 2008, who later bestowed upon them the title of 'Dean's Soon'.

Via some Greek Matrix Trilogy fanzine.

Through the course of the interview, Evan, donning a green polo and gaudy chain necklaces, discusses his plans to sponsor rodeo riders to promote Lone Star beer in Texas; surfers to promote Primo in Hawaii; a plan to revive the defunct Star and Stripes beer as a military and veteran's beer, and other asinine strategies from Marketing 101 at the learning annex.  In discussing Star and Stripes, Evan goes as far as to suggest that drinkers of Bud Light are supporting foreigners TERRORISTS!

With the MetroBros new strategies, it doesn't seem far fetched that they could eventually take up Kid Rock on an offer he made several years prior: to be the celebrity spokesman of Pabst Blue Ribbon.  The nail in the coffin for PBR's (falsely) perceived 'authenticity' is already out there people, it's just question of whether or not the new owners will decide to use it.  The pair are already in the process of sponsoring Funny or Die produced sketches that will prominently feature PBR, after Evan approached Will Ferrel's company saying: “We want to win. We want to blow these brands out, explode them, and make everyone lots of money.”

Possibly the one single redeeming plan the MetroBros may have for their company applies directly to their Colt 45 malt liquor brand.  According to the Business Weekly article, they are currently in negotiations with Snoop Dogg in developing a line of Colt 45 flavors.  FLAVORS PEOPLE.

Expect Gin n Juice Colt 45 tallboys to hit a liquor store near you in 2012.

How exactly is this a problem?

I questioned whether the change in ownership would cause PBR to ‘go (even more) mainstream.’

There’s not much more mainstream that a nationally-distributed beer that is heavily advertised.

Uh, they are. Belgians, to be precise.

there was a great article years ago about the revival of PBR, they noted that if they’d hired that fool Kid Rock, they would have spent their entire budget paying him off and have not a dime for advertising. so instead they started donating beer to art gallleries and having sponsorships on NPR.

Wait, will it taste different under new ownership? No.

Will you and your friends be less likely to drink it? Yes.

If we’re talking strictly coolnesswise, PBR hasn’t been a “hip” beer in ages. My friends and I used to joke about how hipsters sneer at PBR for being “so 2006” but are still on board with PBR’s Mexican cousin, Tecate. I’ve always liked Stella a lot even though it’s a total dudebro beer.

On a somewhat related note though, I’ve never been able to understand San Francisco’s Jameson obsession. I’ve always found it too syrupy and basically undrinkable unless it’s mixed with something and I’d almost always rather be drinking Beam or Seagrams 7, both of which everyone else seems to think are crap.

Trolling is a art.

Trolling is an art

Does no one remember “cool colt” mint flavored colt 45. From the early 90s. That stuff was refreshing. Peace

Why are you so angry lately?

C’mon, does anybody really perceive this? Tecate has been the beer of choice for SF hipsters for years anyways.

So.. What’s the big deal with what the hell beer is cool to drink? I drink a few beers after working in the yard to cool off or at a tailgate with my friends. I don’t give a damn what socioeconomic class/status/clique of people the particular brand is associated with. If it tastes half good and is not $10 a beer, fine by me. Get out of your own ass and get some fresh air.

Evan Metropoulos is cool. I’m not sure why this article has so much hate. Just because the brothers grew up with money doesn’t necessarily mean they should be hated on. I love what they are doing with their partnership and the fact that they are promoting PBR art, which is something that should be curated. Have you seen some of the awesome work being done by professional and amateurs?

From it’s inception, the article starts off with a bash of rich people.   How Bohemian and current OWS.  PBR??  Desert Island famine beer.  If it’s Wednesday, but you don’t get paid till Monday… PBR. The beer fru fru’s of the world are ruining a common drink.