Is Oakland Stealing the Mission's Scene? 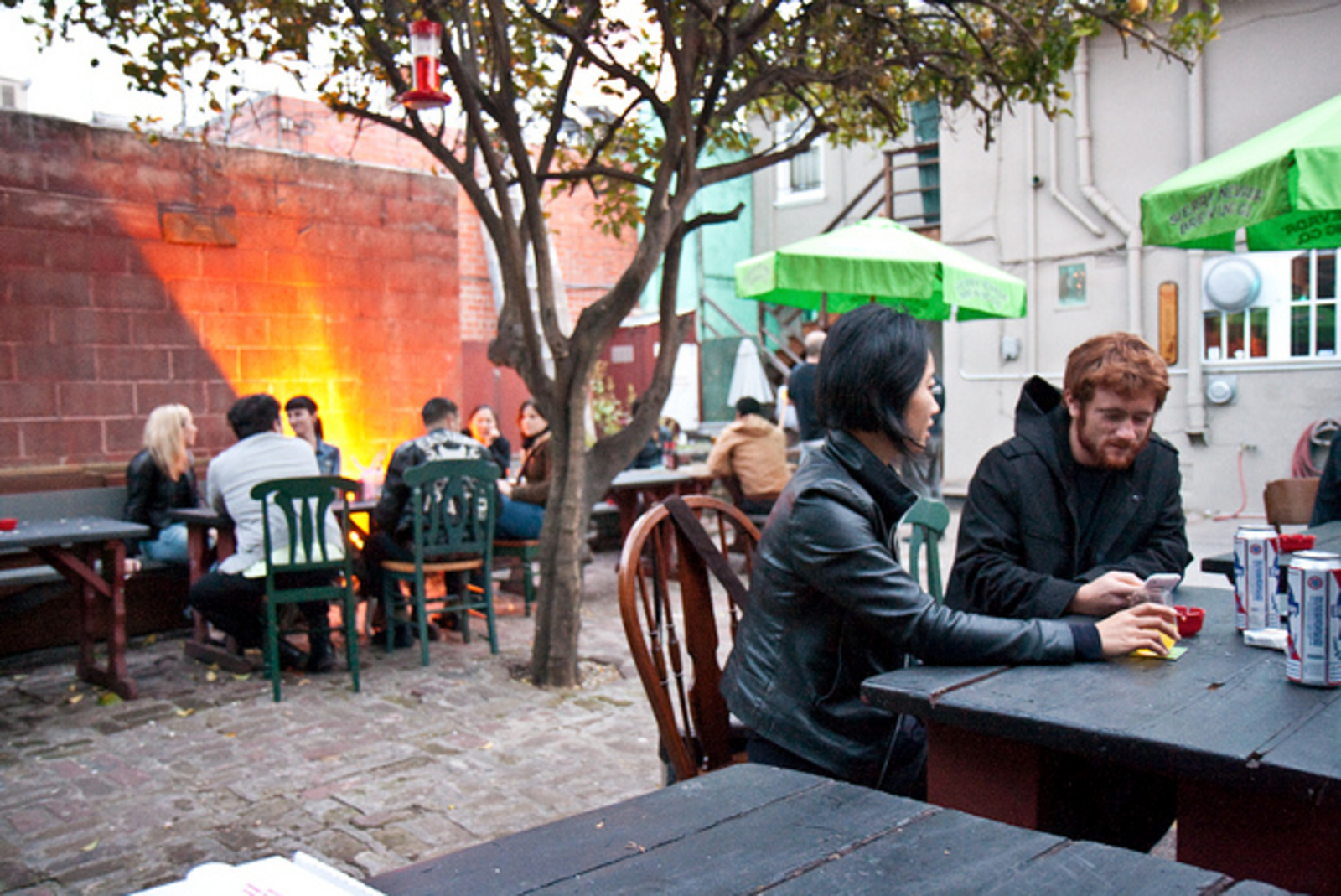 Are historically all-black bars turning into hipster dives a sign that Oakland is ‘fucking over’?

Are historically all-black bars turning into hipster dives a sign that Oakland is ‘fucking over’?

The good olde days of 1999 are long gone, Chris Daly’s war on Mission gentrification is over—“La Mission” lost and the gentrifying forces of decades past are moving back—and the neighborhood’s transition towards Noe Valley is cemented (hell, realtors are already carving up the neighborhood).  With rising rents, a fleeing art scene and neighborhood concerns shifting towards public drinking, the same types of bleeding-edge cool that made the Mission accessible in the late-80s/early-90s are packing up their bags and settling in all parts of Oakland (this very blog has lost two contributors to Oakland in recent months).  Well, according to THE OAKBOOK, Oakland is now experiencing the same gentrification woes that the Mission experienced during the dot-com boom:

[Moving into West Oakland is] a trend that started earlier in parts of North Oakland - young white families or singles moving into neighborhoods that had been predominately black or Latino. Gentrification is usually derided by people who are concerned the old residents are being pushed out of their neighborhoods. The fact that parts of West Oakland are being transformed is particularly striking because the area has been the heart and soul of Oakland’s African American community, historically and culturally.

It also speaks to a citywide trend - the dramatically decreasing African American population. From its peak as 47 percent of the population in 1980, the proportion has dropped to 29.8 percent, according to the U.S. Census American Community Survey in 2006 -08. Between 2000 and 2008, 34,000 African Americans left the city, the largest exodus in Oakland’s history. It would seem that Oakland’s days as a predominately black city, with the attendant influence on politics and culture, are numbered.

That’s right, young white people, in search of cheaper rents, better street art and music (I mean, Third Eye Blind vs. E-40 COMEON), are throwing their hands up in the air and moving across the Bay.  What does this mean for Oakland and it’s African-American population?  Well, OAKBOOK is putting together a multi-part series on exactly that, but you’re going to have to wait for it (hint: it doesn’t look good).  In the meantime, what’s happening to the Mission?  With the cost of living in the Mission going up and the quality of weekends in the neighborhood plummeting (remember the days, like, in 2008, when the bars were not fucking packed all the time?), it’s no surprise that there are more fixies in the Richmond and more rocking house parties in West Oakland.  Is the Mission a sinking ship (with Dolores Park being our life raft)?

this is a pretty random quote from that story. not sure what Greg Hodge was trying to express…or how OAKBOOK was trying to contextualize it…

“Greg Hodge, a community activist who has lived in West Oakland for 18 years, shared one. It was about 10:30 p.m. and a young white woman with purple hair, out walking her dog, passed a group of African American men hanging out in front of a liquor store. She seemed comfortable with or maybe oblivious to a group that many, including some African Americans, might find intimidating.”

er, okay…but yeah, sounds like it’s going to be an interesting feature (no sarcasm/ sincerely)…

I like how you jump to the conclusion that people moving to West Oakland are coming from the Mission.

“Are historically all-black bars turning into hipster dives a sign that Oakland is ‘fucking over’?”

Somewhat interesting that you use a picture of a bar that’s been open for about six months or so, was never ‘historically all-black’ (obviously), and isn’t even close to West Oakland (the area the majority of your post focuses on). Right on!

So you cite an article that talks about West Oakland, but that shows a bar at Lake Merritt? Great source! Stick to the city. Or better yet, your one block radius of Capp and 23rd.

i only date guys from oakland now, so it must be the new mission. and not unlike the mission, people from the suburbs move there…

I know plenty of people who’ve fled SF’s high rents and don’t blame ‘em. I considered it a while ago when I was commuting to Lafayette but never did. whatever money I’d save in rent I’d lose in buying more alcohol to make me forget I was in fucking Oakland.

Com’on KevMo. Not another “Oh no Mr. Bill, the Mission is gentrifying” post. You gotta live here more than 2 years to make these broad brush generalizations. Maybe over there at 22nd and Capp you’re feeling the sway of gentrification, after all they did open up a cupcake store ½ a block away (that still there?) from you, but over here at 23rd and Capp, we’ve got nada. We live next door to an adult care community (the Mission is still full of them) with guys chain smoking all day long, drinking coffee, singing Cal fight songs, and dressing in fantastic drag. Across the street, is an out-patient facility for certified insane people, who once in a while get pulled out of the house in handcuffs when the cops have to take them back to the hospital to refill their meds. Dogpaw still lives lives two buildings down. People are still getting shot and mugged. And best of all, look at these crime stats (http://www.crimemapping.com/map/ca/sanfrancisco) in the last 5 days we’ve had 128 reported crimes (Mission is probably still Top 3 in terms of crimes per capita) ranging from robbery to assault to fraud to larceny. Gentrification my ass. I know we’re bloggers, but lets base some of this shit in reality.

I think that was Chelsea Clinton’s new husband, not Kevin.

that’s your generalization of crime in the entire state of massachusetts? nice try, bro.

Just stay out of the TL! We don’t want you Mission people! GTFO!

Anyone who was in the middle of the so-called “gentrification wars” knows that every single itsy-bitsy thing about how *it* (*it* being the mythical *war* itself) manifested as a kafkaesque farce, and its two-bit fraud of a buffoon of a leader was the Daly trash.

The only saving grace in the whole mad mud pie of it all is that the people who were here before that asshole moved in, and who remain now that he has fled with his fat asshole to the burbs, where his genetic ilk so clearly belong…

well we are still here. And he ain’t.

He couldn’t run us out, never will, and most importantly, is the mortal enemy of everything this blog represents. In order to pick your friends, you have to have the good sense to know who your enemies are.

I occasionally read this blog to see what the new kids are thinking. It truly amazes me how this discussion hasn’t changed over the past 20 years. We really are a small town.

Genetic ilk? Is being a progressive, albeit a self serving one, genetic? They never told us they could screen for political affiliation when we took all those test before our kids were born.Would have liked to weed our the repugs out of the next generation’s gene pool.

Moving to Oakland is so 2009. It’s mid/late 2010, now it’s all about people realizing Oakland is a hellhole and moving back to the city. Get with the times!

Hey, are there any poncho- and cowboy- hat-wearing illegals on this string? No?

Listen, white people, you are the gentry that you are talking about. It doesn’t matter if you have a purple shock in your trend-right hair and work at a video game company versus Wall Street. You are all priviledged kindle classers imagining that you are slimming it. The reality is that the cupcake store does not open up for the one guy driving a porsche that comes down on Friday night, it opens up for you fuckers

There are poor white people out here who have bad credit, don’t eat cupcakes and will find any place that will take them. You don’t have to be mexican or black to be relevant via being poor and trashy. Kinda feel embarrassed for you and the fact that you dropped out of middle school.

This will never happen. Mission kids are too snobby to leave SF.

Why did the last comment change my name? Please delete above.
Not sure that using my photo of the Heart and Dagger Saloon is a good visual representation of white gentrification of Oakland, given that the Heart and Dagger Saloon is typically very racially mixed in its clientele – and so is this neighborhood I live in, that’s a big reason why I live here, it’s multicultural, accepting of all different lifestyles and diverse in age, sexual preference, you name it. If you look at the whole set of images (which is not a complete documentation of every patron of the bar, by any means) you will find that while you can pick one image that seems “white” or “gentrified” you will find most of the folks are working class, and diverse. http://www.flickr.com/photos/inkvision/sets/72157623867565544/with/45254…

stay out of Oakland it sucks!

Lived and Oakland and loved it ⅚ years ago. Still fun and undiscovered. Fun place to find hidden bars and food holes. Excellent views of the bay and the ‘unplugged’ from the city feeling. Now, all I see the same bearded thick-frame —glasses ‘non orginal’ wannabe artist hipsters, 20/somethings pan handling right at telegraph and MacArthur while drinking Starbucks coffee, and a proliferation of loud obnoxious tasteless bars. Before, there was character and exploration to be found… crime was there. Crime continues, but in addition Oakland is now the sad landmark that’ll follow the same consequences SF/mission is undertaken. The charm is lost.