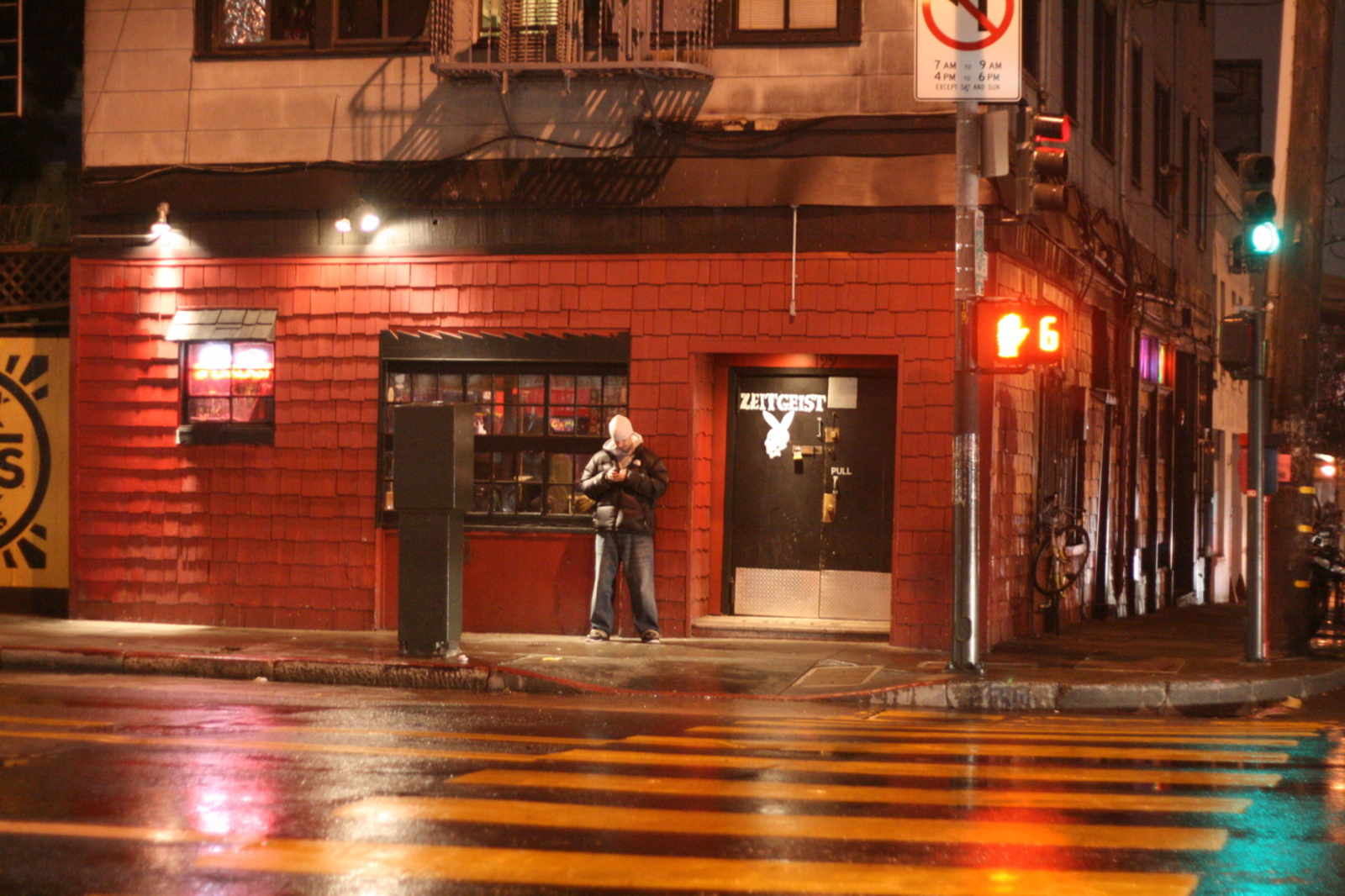 From an article in the Chronicle, which is apparently old media or something. I just know it’s terrible and C.W. Nevius is public enemy number one. This one’s about mean bartenders, by some guy name Harmon Leon, who used to write for one of those two weeklies that stay fill their pages with back and forth shit-talking about stuff nobody else cares about. His conclusion:

The award for the all time meanest bartenders in San Francisco has got to go to the crew at the Zeitgeist. Besides scowling things like, “F-ing yuppies,” if someone with a shirt with buttons orders a drink, there is always an unpleasant sort of life-has-kicked-them-in-the-nuts, unhealthy tweaker vibe when you when you try to order a drink.

Listen, I wasn’t going to say anything, but you just basically said that every person who works at Zeitgeist is a loser and a meth addict, asshole. Maybe it’s just because they don’t like white dudes rockin’ dreadlocks like they’re at Lollapalooza 1993, maaaaaaan. This ain’t the playa, we don’t all love each other here. Also, I’ve heard people say Zeitgeist bartenders are mean, never noticed it myself. Plus, I like surly bartenders. The surlier the better. Scares off the douchebags.

The surlier the better. Scares off the douchebags.

If I ever see you, I’m buying you a beer.

Okay, I used to agree about the “surlier the better” thing but then this past weekend a friend of my roommate, who was in town visiting for the first time, was thrown out of zeitgeist in a burst of profanity for wearing patchouli. (I’m not going to defend patchouli, but I’m sure people have smelled of worse things there) My reaction was, not that the bartenders were meth heads, but that they purposely do something outrageous from time to time to keep up a reputation as “edgy”.

Patchouli is a highly irritant scent. If any odor is distinctly noticeable to someone from across a two-foot bar in a room full of alcohol, it is offensive. Furthermore, to quote my friend TOPR, the only reason a grown man should have a flower in his hair is because he head-butted a hippie. Keep it at GGP, sir.

Oh come now….taking shots at Harmon Leon about his dreadlocks is soooo 1997. Grow the fuck up.

i’ve also had a good friend thrown out of Zeitgeist for wearing patchouli, it’s not a big deal. I’ve had friends thrown out of bars for lots of reasons. You always live to drink another day.

I thought that the Revolution Cafe thing was odd too. I did laugh reading it though … of course the white guy with dreadlocks orders a Red Stripe.

As somebody who dresses like a fucking yuppie (though in an 80s way that might come off as failed hipster), I’ve always found Zeitgeist bartenders to be professional and courteous. Maybe it only seems that way since I make sure to wait my turn and have my order, cash, and glass count ready when they ask for them. They very much notice– and frown upon– people trying to jockey for position, calling out orders when they’re not asked for, and waving money like they’re at a strip club. I only wish bartenders everywhere would tell customers to go to gtfo for acting like douchebags.

the bartenders at zeitgeist hate me and i love them for it.

Going to Zeitgeist to document this with my new Flip video apparatus.

Chances they will throw me out and prove me right?

Zeitgeist isn’t that bad, but there is one particular bartender who’s such an idiot that its physically repellent - especially when he uses the same stale joke over and over, calling out, “it’s a bar not a ride,” whenever the place is full of non-regulars (e.g. tourists) who are patiently ordering in an organized manner. I’ve seen him around at most of the other Mission bars drinking, usually shit-faced out of his mind, slurring and generally annoying everyone around him. Most it’s just annoying and sad, not so much “too mean.”

Obviously I’m posting this anonymously because there’s not doubt in my mind he could easily kick my ass, but this is the internet and I have to get my (virtual) jabs in where I can…